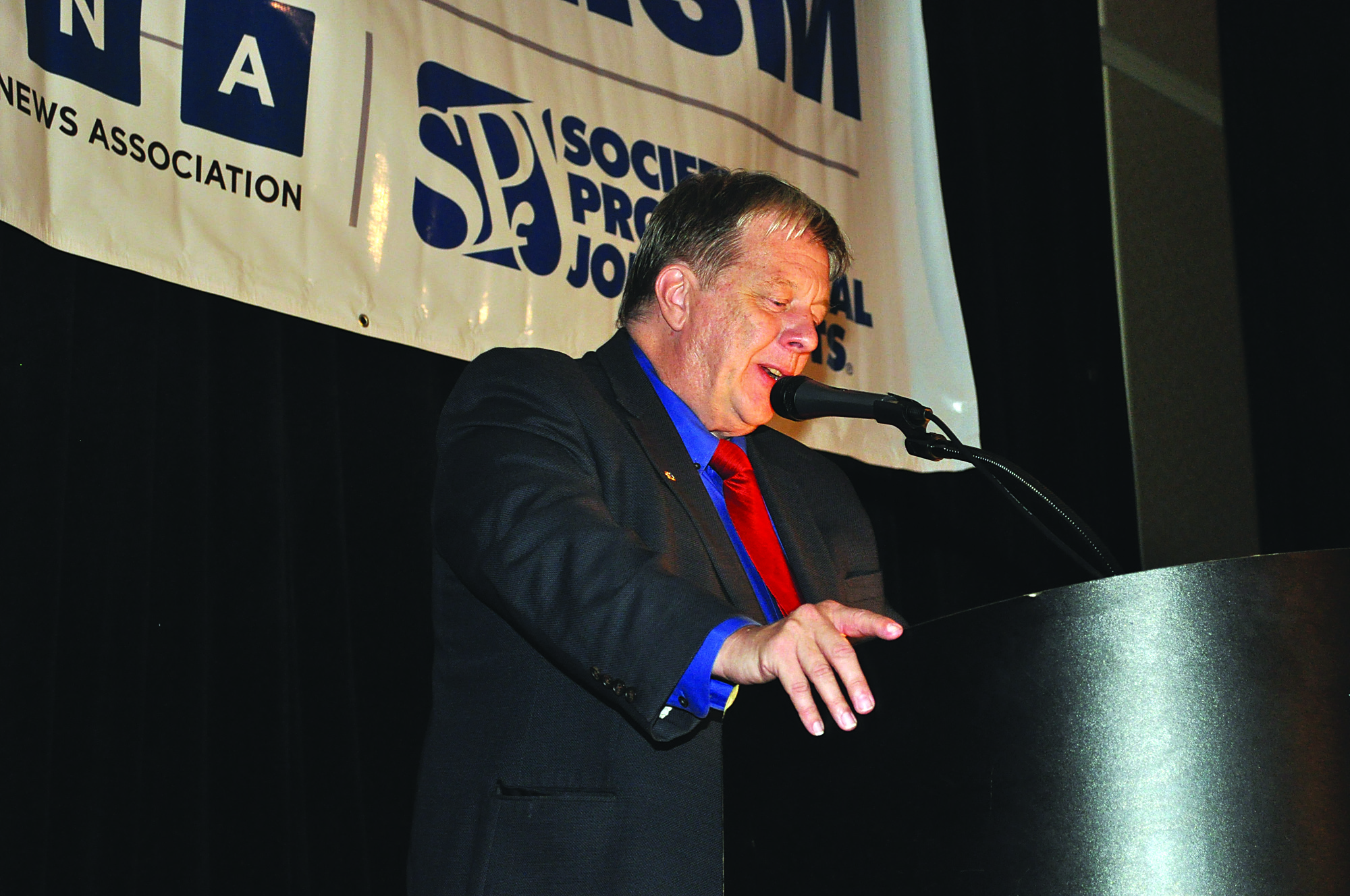 On Saturday, Sept. 27, before 250 people at the President’s Installation Banquet in New Orleans, John Ensslin was sworn in as SPJ president.

It’s one thing to be an experienced reporter, but it takes a different person to also be a great leader, with high ideals and an equally impressive list of achievements. For Ensslin, everything started when he was a fourth-grader in New Jersey. When his teacher took a sick day, her husband ― the night sports editor for Ensslin’s hometown paper, The Hudson Dispatch ― stepped in to substitute.

Realizing that his teacher’s husband had just about the grooviest job anyone could have, Ensslin started his career as a journalist by posting accounts of the 1964 World Series on his front porch for neighborhood kids to read. In college, Ensslin joined the staff at the local Bergen Record, covering night meetings. He recalls the days before the Internet and cell phones, when college students part-timing as newspaper staff would attend public meetings and phone in the results.

Ensslin moved on to the Hudson Dispatch and the Middletown Times Herald-Record, eventually packing up and moving to Denver simply for adventure. He reported for the Rocky Mountain News for more than 24 years, feeling drawn to the paper’s sharp writing and willingness to venture beyond routine.

It was during these years in Colorado that Ensslin became involved with the Denver Press Club. He joined the century-old organization in the early 1990s. Time had taken its toll, and members were struggling to keep the group afloat. Ensslin started organizing events and speakers to improve programming and membership, first as the club’s program director and later as president for two terms.

Deb Hurley, then SPJ’s Region 9 director and Ensslin’s colleague, appreciated the progress he made at the Press Club and suggested he join SPJ. Early in 2005, Ensslin came aboard, finally convinced that the Press Club was stable enough for him to leave it. Having learned that he could be an asset to these journalism organizations, he joined SPJ with the intention of helping it the same way he’d helped the Press Club.

When John Ensslin starts something, he does so with commitment and sacrifice. Asked why he has stayed with SPJ, he replied simply, “Everything has made me stay. I’m always struck by how much work we do every day in the cause of journalism.”

A firm believer in the power of collective action, Ensslin stressed: “Alone, we are just people who want to see certain things happen. Alone, we’re a member out in Utah who’s confronted with legislation that wants to gut the Freedom of Information Act. … It helps to have 7,888 people on your side.”

While he tends to attribute his accomplishments to the work of many, Ensslin’s skills in communications, organization and crisis management have prepared the way for progress. He has held several positions in SPJ in only seven years as a member, leaving a trail of achievements wherever he goes. He started as the programming director for the Colorado Pro chapter, moving on to the chapter presidency, where he increased membership by 50 percent.

Later, as chairman of the two-person national membership committee, he recruited 10 more committee members, understanding that equal representation of all members was one key to developing and disseminating effective programs and policies.

Strengthening and increasing membership has been a common theme throughout Ensslin’s career in SPJ and the Press Club. Membership will continue to be central to his activities as president, explaining in his installation speech that changes in the journalism profession will continue to affect membership numbers unless efforts are made to retain current members and attract new ones. He also expressed goals for improving chapter health through programming.

Ensslin and his wife moved back to New Jersey in 2009 to be closer to his family. He now covers county government for The Record, coming full circle to one of the outlets where he got his start (if you don’t count his front-porch sports updates).