Recognizing this year’s Wells Memorial Key winner, Bruce W. Sanford, was an honor far overdue – as illustrated by the unprecedented 34 current and past leaders who signed his nomination letter.

While most members might not know Sanford, the BakerHostetler partner has been a central figure in the Society of Professional Journalists’ advocacy efforts since November 1980, when he began as the Society’s attorney. 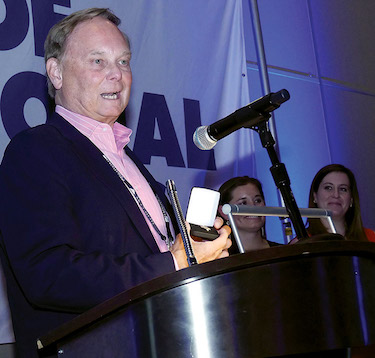 He has defended the First Amendment and freedom of information, and worked through employment contracts, tax law and real estate. He’s organized lobbying efforts in Washington, D.C., and has prepared SPJ leaders to testify before Congress at least a dozen times. His most memorable: testifying before the House Judiciary Committee, with Bob Schieffer of CBS News, on efforts to gut the Freedom of Information Act.

It’s because of Sanford’s work that SPJ and the Sigma Delta Chi Foundation gained a presence on the national stage of media law, and why the Society is a national leader in the fight for a free press.

“SPJ’s work in courtrooms and on Capitol Hill has been, and continues to be, critical to preserving the rights of journalists to serve the public,” Sanford said. “The [Legal Defense Fund’s] constant support of state and national FOI battles puts our money and mouths into action.”

Before going to law school, Sanford worked as a reporter at The Wall Street Journal. Now, he’s one of America’s leading media lawyers.

“As a former reporter, I always wanted to combine journalism and the law protecting free expression,” Sanford said. “Forty years of work in the trenches has given me an invaluable perspective on emerging issues in digital communication and the dizzying gyrations in Washington.”

Paul McMasters, SPJ president 1993-94 and 1990 Wells Memorial Key recipient, said in nominating Sanford that he is a great First Amendment advocate and freedom of information attorney.

“He has cared deeply about SPJ and always viewed the press as one of the most vital parts of the democratic process,” McMasters said.

In his nomination letter, David Carlson, SPJ president 2005-06 and 2013 Wells Memorial Key recipient, said Sanford has brought the Society much prestige, and seats at many important tables.

Sanford has also provided invaluable legal advice at key moments in the Society’s history, Carlson said – including a libel suit over SPJ’s ethics book and the two largest bequests ever made to the Legal Defense Fund, from Vanessa Leggett and Josh Wolfe.

Sanford has been with SPJ for almost 40 years and has continued to keep the Society’s interests at heart, despite SPJ’s ability (or inability) to pay BakerHostetler’s hourly rate.

“There were times when things got tight that we were forced to scrimp on his fees. I don’t believe he ever scaled back in his advocacy on our behalf,” Kelly Hawes, SPJ president 1995-96, said in nominating Sanford.

Sanford only received two raises in his time at SPJ – each at least 17 years apart – while BakerHostetler was providing over $100,000 per year of pro bono work for the Society.

“I know he spent many hours working for us when he could have been billing much more lucrative hours for clients with much deeper pockets,” Jim Plante, SPJ president 1987-88, said in his nomination.

Sanford received the Wells Memorial Key, SPJ’s highest honor, at the 2017 Excellence in Journalism conference. He said he was touched and greatly honored to receive it, since the award is usually given to journalists.

Named after Sigma Delta Chi’s second national president, Chester C. Wells, the Wells Memorial Key was first awarded 99 years ago. Each year, it is given to a member who has performed outstanding service to the Society in the preceding year or through a period of years.