Pulitzer Prize-winning Washington Post reporter David Fahrenthold has covered a wide variety of topics in his 17 years at the newspaper. Like many journalists, he started as an intern before becoming a night cops reporter. He has since reported on the Washington, D.C., police, the environment New England region.

His first stab at a political beat began on Election Day 2010, when a new wave of Republicans entered Capitol Hill. Fahrenthold subsequently covered the 2012 and 2016 presidential elections. In between, he spent a year or so reporting about wasteful spending practices by federal agencies. 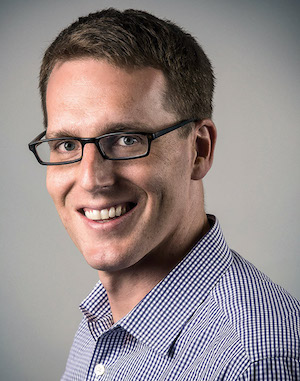 This year, the Society of Professional Journalists gave Fahrenthold a Sigma Delta Chi award for his investigation into Donald Trump’s charitable donations. A series of stories on this topic, along with a piece disclosing crude comments Trump made during an unaired part of an “Access Hollywood” interview in 2005, earned him the 2017 Pulitzer Prize for National Reporting. Today, Fahrenthold covers President Trump’s businesses and conflicts of interest.

Answers have been edited for length and clarity.

What experiences in your career at The Washington Post prepared you to cover Trump?

To me, the most valuable experiences were those times covering government waste and bureaucracy. That’s not to say that this is a particularly wasteful government. What I mean is that a lot of the time, you’re writing about a federal agency that was doing something that was, for lack of a better word, stupid.

The National Raisin Reserve, I wrote about that. The USDA was forcing magicians who would pull rabbits out of hats to get licenses for the rabbits. I wrote about this thing that was an underground paperwork mine in Pennsylvania, like an actual underground mine full of file cabinets that OPM (U.S. Office of Personnel Management) operated.

In every one of those cases, the federal agency was uncooperative. They didn’t want this to be written about them, they didn’t want to talk about it. You were always working for ways around the official spokespeople, ways to get around the story. They couldn’t kill the story by not cooperating.

I’d be remiss if I didn’t ask you about the Washington Post’s fairly new tagline, “Democracy Dies in Darkness.” Are there any other taglines you would use to describe the kind of reporting you and your colleagues are tackling right now?

I think what you’re seeing from us is accountability. This is an administration that, more than usual, wants to be judged for what it intends to do, what it says it does, rather than the actual substance of its actions. What we’re doing is showing the reality behind an administration that sometimes doesn’t want to acknowledge reality or be judged by reality.

It was amazing. The actual experience was even more overwhelming than I anticipated. The cool part about it has been that I get to be kind of a mascot for journalism at a time when people really care about it — when journalists feel like what they’re doing is both important but also under attack, and when regular readers are seeing the value of journalism in a way that maybe they didn’t used to before.

The release of the “Access Hollywood” video was a challenge to the Trump campaign at a time when many were calling for him to step down from his nomination. Are you surprised that it didn’t sway more voters in the end?

No, I wasn’t. Even the day that story came out, when it got all that attention, I didn’t think, “This is the end of Donald Trump.” I didn’t think going into it that it was going to be something that was going to change people’s minds if their minds hadn’t been changed already. Presidential campaigns are just too complicated. Especially that one, there are too many other things going on.

You’ve obviously had to use FOIA and find public records throughout your career, and certainly to inform a lot of your reporting in covering Trump’s donations to charities and his business interests. What is your strategy in deciding what information to look for?

The thing that I find challenging is organizing the information. It’s easy to get a lot of information, but to sort of track it and remember it and see connections between things, that was the challenge of last year, and it’s been the challenge of this year.

Last year, by the end, I had a little niche, the Trump charity niche, and I knew everything there was to know about that little thing. Now covering the Trump organization, it’s much more complicated — a lot of properties, a lot of different businesses.

Can you recall a time where you’ve had a challenge in fighting for information you needed? If so, how did you handle that?

That story about the underground paperwork mine I wrote back in 2014. It’s owned by the Office of Personnel Management, and I called them and said “I heard you operate a giant underground cavern full of file cabinets. I want to see it and write about how it works and what you’re doing to make it better,” and they were like, “No, you can’t come in.”

I think they thought, “We’ll kill this story because how can you write a story about the caves if you can’t go into the caves?” So I found people who used to work in the mine. From talking to them, I could draw you a map, after all this reporting, of all the different rooms in the cave and all the processes of who gave what paper to whom, why it was so slow.

I found records from the [U.S.] Government Accountability Office, congressional records going back to the ’70s, that showed that the slowdowns in the system today are the same slowdowns that were in 1978. I came back to OPM and said, “You’re not preventing me from telling that story. You can let me into the cave, and you can talk about what you’re doing to make it work better and why it has to be this way.” And they did, they let me in.

In what ways do you think Trump’s administration has reinvigorated journalism in the public’s view?

I think it’s really invigorating the public interest in journalism just because people — from the attacks on journalism and its credibility — they see us now in a way they used to not see us before. They just saw the news and didn’t think about how the news got to you and what was involved in digging up the truth. I think they appreciate that a lot more, which is great, and are willing to pay for it now, which is even better.

What issues would you like to see journalists explore more deeply involving this administration or any other topic?

During the health care debate, you remember how many iterations of the health care bill it took. I feel like our reporters and other people did a really good job explaining what all of that was. Reporters kept up with not just the politics of it but with the policy. I felt like people were always well-informed on how these policies would work, and I hope that we keep doing that as we get into tax reform or whatever else.

What tips would you offer students and young journalists who are interested in doing the type of investigative work that you’re doing?

Think about how you make a conscious effort to organize your information. Think about the methods you use to organize notes, documents, statistics. Learn how to do that both for a story but also to build a permanent record that you can refer back to.

Learn about yourself. What are the things that handicap you when you’re on your own reporting a story? For me, it’s caffeine. If I run out of caffeine, I don’t give a crap about whatever you’re telling me. Bigfoot stole your car, I don’t care. I’ve learned that about myself and that when I’m on the road, I have to make sure I’m fully caffeinated all the time or I just cease caring.

When you have time to unplug from work, what do you do to enjoy yourself?

I have two little girls, and I spend a lot of time with them, and not much else. My 5-year-old daughter and I do a lot of Meals on Wheels delivery, and I run.