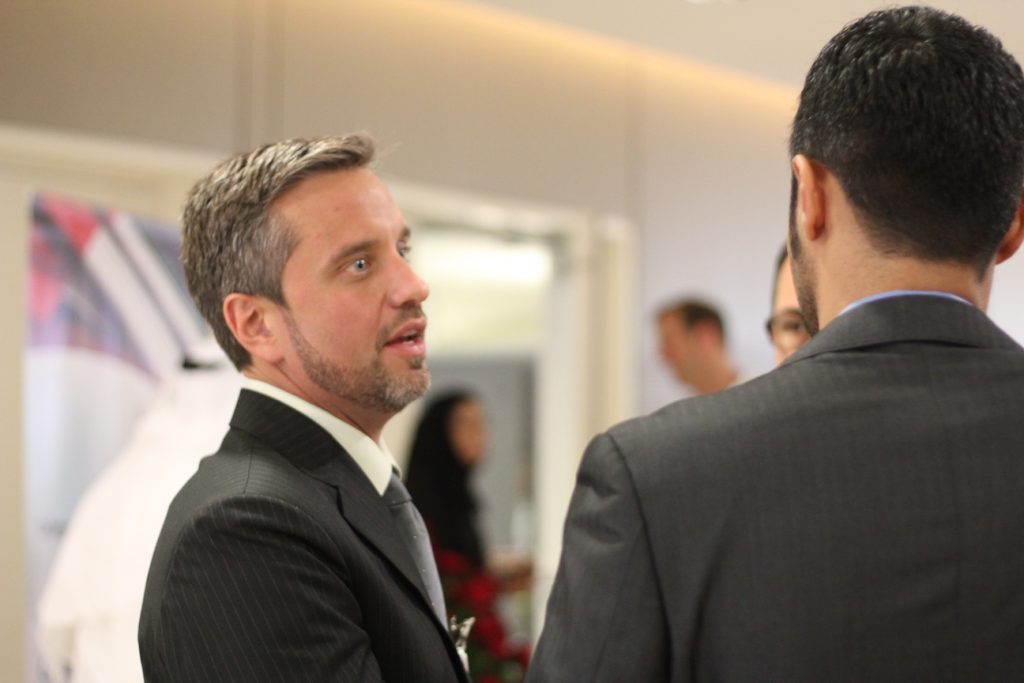 After the election of officers during the first student Society of Professional Journalists chapter meeting in the Middle East, one of Professor Matt Jones Duffy’s Zayed University students told him she was scared because she had never voted before.

Duffy replied as only he could: “You just got a taste of democracy. How does that feel?” Matt Duffy attends a meet and greet after he held a symposium on the United Arab Emirate’s Federal National Council elections Oct. 20, 2011 at Zayed University in Abu Dhabi.

Questions were the center of this journalism educator’s life. Duffy was 46 when he died Jan. 17 in his Roswell, Ga., home after a long battle with lung cancer. He was naturally curious, asked questions about how things work and looked at each day as a chance to write a story about the world in which we live.

Duffy worked on eight newspapers and published two more of his own, beginning with his days as a reporter and editor for The East Carolinian, the student newspaper at East Carolina University. There he wrote a series of stories about how ECU police were conducting wiretaps on university workers. The series embarrassed a nervous administration, which ultimately conceded that mistakes had been made. Duffy went on to work for the Jackson (Miss.) Clarion-Ledger, Nashua (N.H.) Telegraph, Boston Herald and Marietta (Ga.) Daily Journal.

A second career came after he earned both a master’s degree in journalism from the University of Georgia and a Ph.D. in public communication from Georgia State University. Then Duffy moved his family to Abu Dhabi, the capital of the United Arab Emirates, so that he could teach at the federal Zayed University. Duffy taught advanced reporting and media law as he would in a Western country with institutional protections. He also wrote a column on the news media, for the Dubai-based Gulf News.

In his columns, classes and public appearances, Duffy urged the Gulf states to live up to their constitutions and to international agreements on human rights that they signed to allow journalists to ask questions freely and hold public institutions accountable. On the other hand, Duffy also encouraged Gulf journalists to maintain the highest ethical standards and not take bribes when writing about government officials or business leaders.

He was a pioneering participant in social media, publishing a widely read blog on teaching and the news media in the Middle East. Duffy also urged Gulf states not to adopt draconian measures for social media, such as a law in the UAE that makes it illegal to publish a photograph of a native standing in a public place without his permission, even if that individual was acting illegally.

Duffy never lacked for courage and had the audacity to start the SPJ chapter in Abu Dhabi. In that capacity, he encouraged students to write for the student newspaper, to help organize a World Press Freedom Day event at the university in 2012 and to pursue careers in journalism despite a cultural bias against journalism as a profession, especially for women (ZU’s study body is about 95 percent female). Matt Duffy attends the World Press Freedom Day conference at Zayed University on May 3, 2012. Two months later, he was deported.

Accordingly, three of his students would go on to work for The National, the English-language newspaper in Abu Dhabi. Several more would complete internships at CNN’s Abu Dhabi bureau, at Sky News Arabia and the Arabic-language newspapers in Abu Dhabi. Another student had an internship at Al-Jazeera in Doha, Qatar. One student later earned her master’s degree in journalism at the Newcastle University, and another is about to work on his Ph.D. in communication, also in England.

“He was an excellent teacher who refused to let his ideas about journalism and his approach to teaching journalism be dictated by where in the world he was,” said Jack Hillwig, who as assistant dean for the College of Communication and Media Sciences served as Duffy’s boss at ZU. “To Matt, journalism was always the gathering and presentation of facts in an objective way. It was not public relations or opinions. He was a consummate journalism educator who jumped into the world of Middle East media with both feet.”

The UAE government served Duffy with a deportation notice in the summer of 2012, likely because of his commitment to press freedom. Despite the intercession of ZU’s president and provost, Duffy and his family had to move back to Atlanta that summer, and he spent the rest of his life teaching journalism and media law in Georgia — at Georgia State, Berry College and Kennesaw State.

A native of Richmond, Virginia who grew up in eastern North Carolina, Duffy had a touch of entrepreneurial spirit. With his brother Greg Jones, Duffy first published a tabloid about ECU football and then The Independent news magazine in Greenville, North Carolina, in the 1990s.

“We were like a couple of kids running a newspaper,” Jones said of The Independent. “We paid reporters by letting them fill up their cars on our Amoco cards. We were just silly. The paper barely made cost each month.”

In another business adventure, Duffy started a profitable language and grammar website called Oxford Editing. He also was active in international journalism organizations, including the Arab-U.S. Association of Communication Educators and Freedom House.

In conversations about teaching, Duffy often said: “A professor must profess something.” As for Duffy himself, he professed three things: freedom, truth and independent thought. His students were inspired by his courageous and innovative teaching methods. One of his students, Ashley Zoerner, spoke for many others in her Facebook encomium.

“I know that I join countless others in saying that he really was my favorite teacher during my time at Georgia State University,” she wrote. “As associate editor for the newspaper, The Signal, he proofread my stories before print and was so helpful in guiding me and my passion for the written word. I would tell my mom, ‘I have this teacher who may be the most genuinely happy person I’ve ever met.’ He loved what he did and it showed, but he also just loved life.”

Legions of former students both in the United States and the UAE made similar statements on social media message boards after his death.

The journalist-educator sought out international adventures. He traveled far and wide, preferring places off the beaten path. This included trips to Bangladesh, Egypt, Jordan, Oman and Pakistan. The Pakistan trip came while he was doing a Fulbright program in that country.

He is survived by his wife, Ann Duffy, and their two children, Lydia and Jake, as well his brother, Greg Jones. A memorial service was held at the Unity Church in Marietta, Georgia, on Jan. 22.