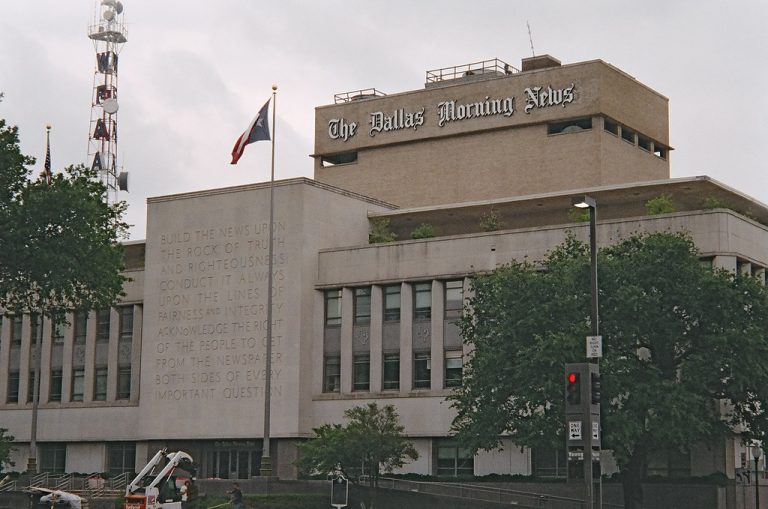 It is a piece of guidance which is as established as the institution of journalism itself – as you work your way through school to get a degree, you form a specialism along the way. This specialism would guide much of the work that you would do during the course of your career.

Yet, the evolution of the landscape in the digital age has challenged the convention of that thinking. As social media and the culture of the internet impacts how one consumes news and how one disseminates it, the idea of a specialism or beat can appear rather outdated. The former building of the Dallas Morning News. The organization is focusing on obsessions rather than beats. (Photo: Antonio Campoy Ederra/Flickr)

This opaque view, as a result, can also have an impact on work journalists do in the field. That view’s impact can be seen first hand, especially in the case of Sulome Anderson, who for many years was a freelance journalist based in the Middle East. She decided recently to return to the United States, after what she says was one of the worst years in her journalistic career.

“I can’t make a living reporting from the Middle East anymore,” Anderson said in an interview with the Columbia Journalism Review. “I just can’t justify doing this to myself.”

Anderson made this decision as the American news cycle continues to be driven by events surrounding President Trump. Though she says Trump was the not the direct reason why she made the decision to leave the Middle East, it suggests a wider problem.

“Open any American news outlet and it’s just Trump, Trump, Trump,” Anderson said. “When that’s the case, there’s very limited space for news that’s not about him. It’s just intuitive that foreign coverage would suffer. Everybody wants to write for these places, yet there’s a shrinking amount of space for [freelance] work, so we’re all just competing over scraps.” Anderson’s story was one that resonated with me deeply, as much of the work I currently do is for audiences outside the US. Indeed, in a news cycle dominated in the US by President Trump, and in the UK with talks between the British government and the European Union on its future as an EU member, it can send the wrong message of what stories audiences might be interested in – and showcase that the subject, rather than the story itself, has precedence. Not only is it wrong, it is also discouraging.

So when a reporter for the Dallas Morning News, who I interviewed this past week for a project for the Freedom of Information Committee, mentioned casually to me the News’ focus on reporters’ obsessions rather than traditional beats, I became curious.

The idea came from Gideon Litchfield, formerly the Global News editor of Quartz. Instead of traditional beats and coverage of regular institutions, the focus would be “an ever-evolving collection of phenomena.”

Editors at the Morning News got wind of Litchfield’s ideas and found inspiration as they tried to figure out what their future was like in the digital age. These obsessions will not last forever – reporters will pitch one and report on it for roughly six months, according to a report from Poynter which looked broadly as the paper’s overall move to digital.

In this digital age, where the landscape is evolving as quickly as the news stories themselves, it has become clear that the story is more important than the beat. Audiences are looking for information about their world and how what is happening will impact their daily lives, and we as journalists try to help by informing, educating and engaging.

Quartz and the Dallas Morning News have done their part to stand out, and their approach of obsessions over traditional beats maintains the commitment for not only their audiences to be informed, but to allow their journalists to do meaningful work, and to tell stories that can make a difference.

Perhaps it’s time that we take a page from Quartz and the Morning News and adapt the obsessions over beats strategy in other newsrooms. The news is changing, and as the news changes, so should the idea of beats – for in this digital age, it is the story, not the beat itself, that should take precedence.