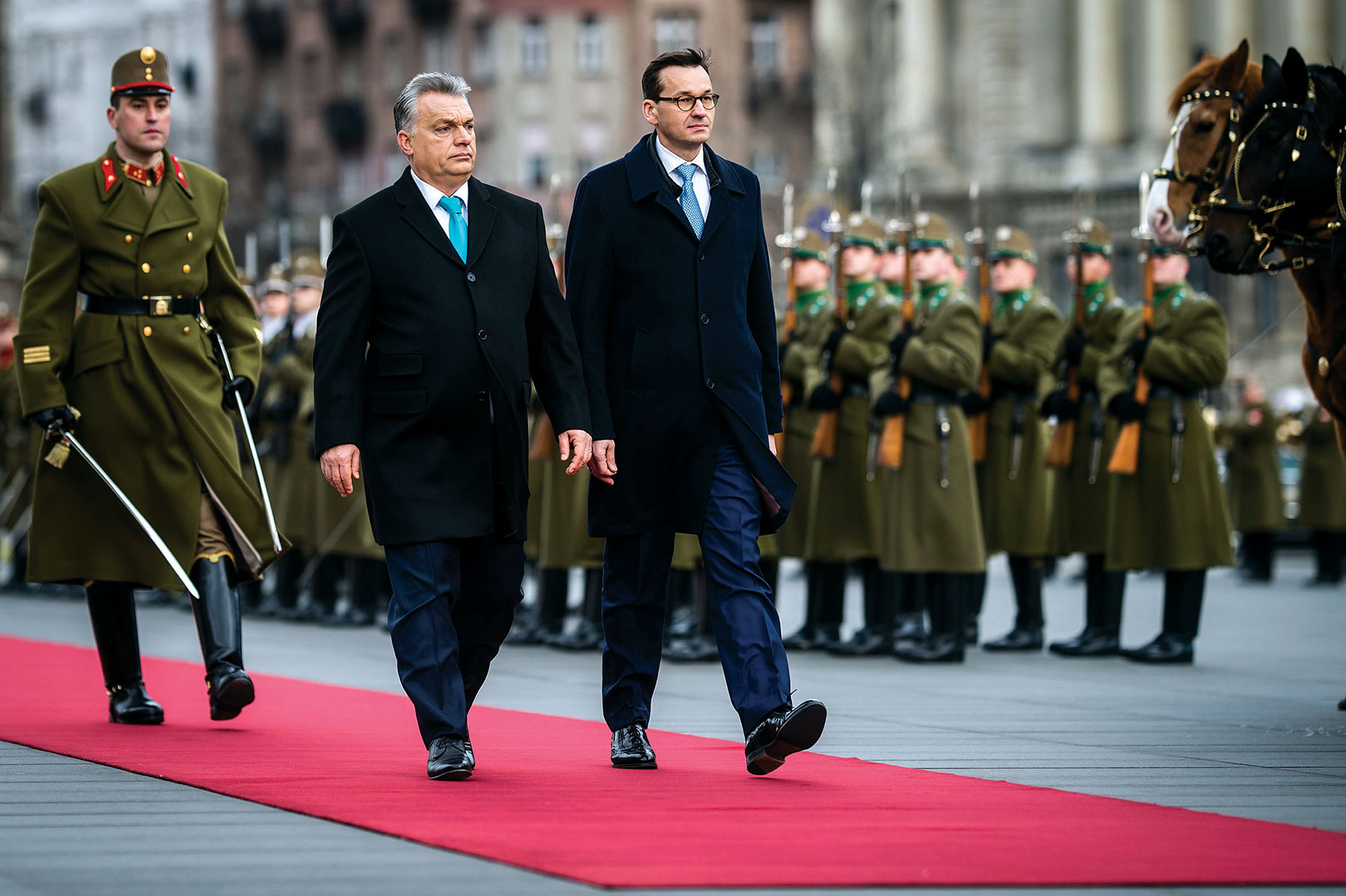 By then, it was “a lot easier to basically manipulate the media corps,” said Natalia Roudakova, author of “Losing Pravda: Ethics and The Press in Post-Truth Russia,” because it was “too late for the public to care.”

The steep declines in media trust had significant consequences for Russian journalists in the early post-Soviet period who sought to carry out a traditional watchdog role of the press. For instance, in 1994 a well-reported story about a mayor’s investment behavior was viewed as negative political advertising since significant portions of the media were producing slanted campaign coverage.

But the ease with which Putin was able to gain control of media entities through forced sales, starting with broadcast television, highlights what could be the greatest consequence: the relationship between media distrust and press freedom.

Trust in the media and press freedom have a direct relationship, experts say. And in an era of heightened skepticism toward institutions across the globe, journalists — and societies more broadly — have already experienced the consequences of media distrust. “Trust is an essential aspect of safeguarding press freedom,” said Jonathan Peters, an assistant journalism professor with an appointment in the school of law at the University of Georgia. “The less trusted the press is, the easier it is politically to impose restriction on press activities. And today that is a real threat.”

First, though, it is necessary to stress the difficulty in obtaining reliable data on global attitudes toward the media because conceptions of “the media” or “the press,” as collective entities, vary across countries and continents.

“Journalism is a little bit like food,” said Tom Rosenstiel, executive director of the American Press Institute and co-author of the textbook, “The Elements of Journalism.” “It is a cultural artifact, and what you think of it depends somewhat on what you’re accustomed to and what you’ve seen.”

What we’ve seen from studies that try to examine attitudes toward the press is no universal trend of widespread distrust, but the findings can still be alarming.

In its 18th annual global trust barometer released in January, Edelman, a global communications marketing firm, conducted surveys across 28 countries. It found 43 percent of respondents trusted the media, and 22 of the 28 surveyed countries distrusted the media more than they trusted the media.

For the first time in the survey’s history, media is the least-trusted institution.

While Gallup’s June 2017 poll found a 7 percent increase in U.S. respondents who said they have a “great deal” or “quite a lot” of trust in American newspapers, that translated to just 27 percent overall.

And in a recent study published in The International Journal of Press/Politics, a trio of researchers from LMU Munich and the University of Southern Denmark examined data from the World Values Survey (1981-2014) and European Values Study (1981-2008), finding a “significant drop in press trust in about half of the countries studied.”

The researchers also make an important argument to consider: Decline in media trust isn’t an independent phenomenon, but instead, their findings show it is “strongly linked” to public perception toward political institutions, which also are facing trust issues, as the global populist wave has shown.

This finding, which the researchers call “the trust nexus,” illustrates the complexity of discussing media distrust. Attitudes toward the press are not created in a vacuum. They do not develop overnight. But that doesn’t diminish the importance of understanding the consequences of distrust.

Other institutions, like banks, might be able to carry out their basic functions despite a trust crisis, Rosenstiel said. Not journalism.

“The press probably depends on the trust of the people more than most [institutions],” he said.

Ecuador was hardly an exemplar of press freedom when Rafael Correa took office in 2007. Freedom House, a nongovernmental organization dedicated to expanding freedom and democracy worldwide, classified its press as “partly free.” But it now classifies Ecuador’s media as “not free.”

To Arch Puddington, distinguished fellow for democracy studies at Freedom House, what happened to the Ecuadorian press under Correa’s leadership is an example of how rhetorical attacks can limit freedom. The rhetoric is designed to sow distrust in the press, often by painting the media as the opposition, Puddington said.

That can create or at least contribute to an environment in which restrictions on the press might be seen as acceptable and possibly “desirable,” said Peters, who also is the Columbia Journalism Review’s press freedom correspondent.

Correa often made verbal attacks toward the press, suggesting the media were “more unpleasant than pancreatic cancer,” “savage beasts” and “liars.” Defamation lawsuits accompanied the war of words, and in 2013 a law was passed that established a media regulator, which has since imposed sanctions against media outlets more than 300 times, according to Freedom House. Rafael Correa, president of Ecuador, speaks during a news conference with foreign correspondents in January 2016 in Quito, Ecuador. (Photo by Rodrigo Buendia/AFP/Getty Images)

Jarosław Kaczyński, leader of the Law and Justice party in Poland, has waged an aggressive campaign against the country’s largest newspaper, suggesting it was “against the very notion of the nation.”

Beyond that rhetoric, crackdowns on press freedom arrived shortly after Kaczyński’s party took control of the government in October 2015, when it passed legislation to give control of public broadcasting to the state. In 2017, Poland was demoted from “free” to “partly free” in Freedom House’s press freedom report.

The problem in Hungary goes beyond whether the public trusts the information the media are reporting. That’s still a concern — a recent report found 31 percent of the public trust the press — but the issue, largely, is about whether the public has access to the kind of information necessary to sustain a liberal democracy, said Eva Bognar, a researcher at Central European University’s Center for Media, Data and Society.

This is the consequence of Prime Minister Viktor Orbán’s assault on the media since taking office for a second time in 2010. It’s included legislation to increase government control over content at state-funded outlets and, among other things, opaque changes of ownership at media outlets, which reached a crescendo in 2016 when a left-leaning paper that reported about Orbán’s corruption closed after its sale to an ally of the far-right leader.

Hard-hitting investigative journalism still exists, Bognar said, but it mostly comes from independent, online-only publications, and their exposes — or reporting from foreign outlets — on important issues such as corruption are hardly featured in state-controlled or pro-government media. Orbán’s party controls 90 percent of the country’s media, according to one estimate.

“If you know where to look, you will find really, really important investigative pieces,” Bognar said. “But if you are not looking explicitly, then this news is unlikely to reach you. And this where people’s right to information becomes problematic. The idea, of course, is that democracy is based on informed citizens. … In Hungary these days, one could argue that citizens are not necessarily informed or they are misinformed.”

In the United States, President Donald Trump has, of course, shown unusual levels of contempt for the media. His use of the term “fake news” to describe negative stories about him and his suggestion to loosen libel laws alarm press freedom experts such as Peters and Margaux Ewen, the director of Reporters Without Borders’ North America bureau.

They individually suggested Trump’s attempts to accelerate media distrust — which, it’s important to note, long predate his political rise — have almost certainly contributed to the rise in physical attacks against reporters. U.S. Freedom Tracker found 44 such incidents in 2017, one of which was then-candidate for Congress Greg Gianforte assaulting the Guardian’s Ben Jacobs.

Indeed, not all 44 incidents can be attributed to eroding media trust, Peters said, but he still expressed concern about the consequences of the troubled media environment.

For Roudakova, the author of “Losing Pravda” and a professor of communication at Erasmus University Rotterdam, her concerns about media distrust extend beyond physical attacks or legal crackdowns. They are about how media distrust could create a society that no longer values truth.

Roudakova said she initially thought her research focus would be on journalism and the declining trust in it. She hadn’t considered the theoretical relationship between truth and trust. Her fieldwork changed that.

Journalists generally view one of their most essential societal functions as speaking truth to power, to be truth-seekers, to be truth-tellers. But is it possible to carry out that function without the public’s trust?

“That’s why journalism ultimately matters. It helps people feel like they are connected to something bigger than themselves,” she said. “When somebody reads news actively, they discuss it with others, they follow up, they write letters to the editor … they learn about things they can do in their community. They learn about crimes and misdemeanors of public officials. This notion of publicness, of commonness, that is alive.

“When that space is dead or replaced by propaganda, then all hell breaks loose. That’s, I think, the most important consequence in the loss of trust in media. It ups the stakes a little bit.”

Kevin Stankiewicz is editor-in-chief of The Lantern and a senior at Ohio State University. This summer, he will be an intern at the Columbus Dispatch. His work has appeared in the Washington Post and Pittsburgh Post-Gazette.

Previous story
How news literacy programs can help journalists earn back trust
Next story
How PolitiFact is fighting ‘Fake News,’ one stop at a time