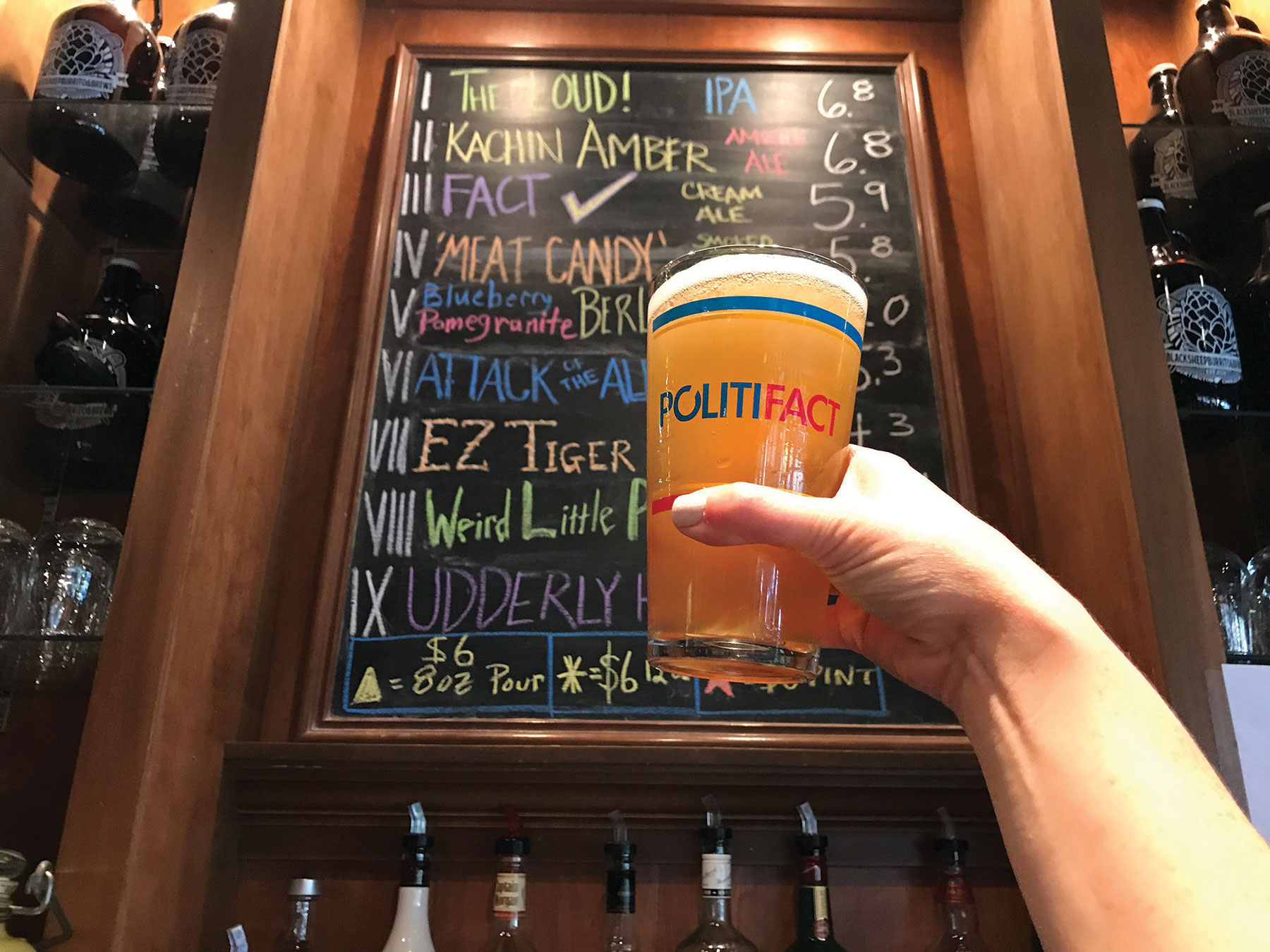 How PolitiFact is fighting ‘Fake News,’ one stop at a time

Last August, President Donald Trump told an arena of supporters in Huntington, West Virginia, that the “Russia story is a total fabrication.” Investigators, he said, should be looking into the uranium Hillary Clinton “sold, which is now in the hands of very angry Russians.”

Neither claim was accurate. But from the effusive applause and nodding heads, the crowd seemed to believe Trump. “Lock her up!” they chanted.

Two months later, on a chilly Tuesday night in nearby Charleston, I paced the halls of the city’s main library.

PolitiFact staffers arranged about 60 chairs into tight rows of a wood-paneled meeting room. We rehearsed a PowerPoint and waited for the room to fill. Or, I should say, hoped the room would fill. We drilled each other on how to pronounce Kanawha County (ka-nah, not ka-na-wha). We laid out coasters and stickers that said Pants on Fire.

Now we were here, in a state that voted overwhelmingly to elect Trump, to talk about the facts and what fake news really is.

Would they believe us?

The first guests trickled in.

To understand how we got to Charleston, you have to know a bit about the work of fact-checking.

PolitiFact was founded in 2007 by reporters and editors of the Tampa Bay Times to cover the 2008 presidential race beyond the he-said, she-said tradition. We wanted to tell readers through reporting what checks out and what doesn’t. For more than 10 years, the website has provided reported verdicts about campaigns and public policy on a Truth-O-Meter, with six ratings from “True” down to “Pants on Fire” (a rating that still gets laughs). The result: more than 14,000 fact-checks.

Between offices in Washington and St. Petersburg, Florida, our staff has eight full-time fact-checkers who scrutinize the White House, Congress, TV pundits, and state officials and races every day (plus, the real “fake news”).

We’ve shared our methods and our PolitiFact brand with newspapers, radio and TV stations, and online news startups in 13 states, which apply the same scrutiny to their governors and elected leaders’ rhetoric and campaign promises.

The 2016 election was our third presidential race. Without a doubt, it was the most fact-checked in the country’s history. But it also raised serious questions about the role of fact-checking, and facts, going forward. Rumors about Barack Obama’s birth certificate was one of the first issues PolitiFact tackled. (Photo by John Moore/Getty Images)

One of the most popular postscripts was that fact-checking failed. By any reputable count — including ours as well as ones compiled by FactCheck.org or The Washington Post Fact Checker — Trump told more falsehoods during the 2016 campaign than Hillary Clinton. Yet Trump won, so fact-checking lost.

That’s the wrong interpretation of what fact-checkers do.

PolitiFact’s Truth-O-Meter was never designed as a service to influence votes. Instead, it is a tool to help citizens better understand policy.

Put simply, PolitiFact and fact-checking organizations like it seek to illuminate facts and let that common understanding inform beliefs. Too often, we see, the process moves in reverse.

People know what they believe and go in search of facts to support those beliefs, and the internet delivers.

Think the Clintons are involved in an underground sex network? There are facts for you! Think the White House chef quit because Trump eats only fast food? Some blog has you covered.

Before your Facebook feed, it was your email inbox. Chain emails claimed Hillary Clinton refused to meet with Gold Star mothers (False), that she and former President Bill Clinton charged the Secret Service rent for watching over their Chappaqua, New York, property (False), and that she advocated a communist worldview (Pants on Fire).

What changed is the way a falsehood can spread.

During the 2016 election, we failed to provide enough attention to what has since become described as “fake news.” By that, we mean fabricated content disguised as news coverage of real events.

It doesn’t mean we didn’t see the stories — the pope endorses Donald Trump, for instance — but we believed readers were able to discern real stories from alarmist fake ones. Not to mention, our staff already had its hands full with claims from the presidential candidates, plus a dozen or so Senate campaigns and other state races for Congress and ballot questions.

Now it’s clear we should have held those wildly wrong claims to the same standard for everything we check — do people wonder if the statements are true?

PolitiFact didn’t use the phrase “fake news” with regularity until weeks after the election, when we awarded the phenomenon our Lie of the Year and joined with other fact-checkers to scrutinize suspicious stories on Facebook flagged by its users.

PolitiFact has been doing that work for more than a year now, and we have debunked at least 1,722 individual URLs (or nearly five articles a day for the year).

The falsehoods are still rampant and ridiculous. The motivations of the content creators became harder to pin down. Some are in it to divide, inflaming debates on NFL anthem protests and the Charlottesville, Virginia, protests.

To make their work look real, writers mimic traditional media. They use “BREAKING!” and “Exclusive” in their headlines and append “sources said” onto their phony stories. They steal professional photos and assign them new, wrong captions.

PolitiFact writer Josh Gillin interviewed one man who says he concocted false narratives in an effort to trick conservatives into believing ridiculous information. The man, Christopher Blair, offered vague disclosures that his pieces were satire, arguing that it shouldn’t therefore be fact-checked. But he didn’t seem to care about the copycat websites that republished his stories without traces of it being a joke.

The burden of truth was on someone else.

“It became very easy to see how people could be fooled, especially if they were not savvy news consumers,” Gillin told me. “You can see why people get so upset on just reading the news at all.”

Add the president’s use of “fake news” to dismiss news coverage he does not like (more than 400 times in 2017, by CNN’s count), and you are left with an electorate too confused about the underlying issue to act on the problem.

Back in West Virginia, four of us are seated in chairs facing an audience of about 60 people. The conversation in the downtown Charleston public library is about to begin.

I am already anxious about being put on the spot in the post-presentation Q&A. But first, our reporters and editors have to get through our slideshow outlining the standards for our work. Those include no anonymous sources and a requirement that three editors deliberate and decide a fact-check’s ruling.

We go over what a fact-check idea sounds like. “Obamacare is the worst piece of legislation in the history of the United States” is an opinion, so not good. But because of Obamacare “millions of Americans have lost their jobs, have been forced into part-time work”? Game on.

The audience is quiet, following the concepts.

It’s my job to give the audience a taste of the editors’ conversation on ratings. I pose a little-noticed statement from the Democratic primary from Bernie Sanders: “Very little of the (defense) budget — less than 10 percent — actually goes into fighting ISIS and international terrorism.”

I know our rating, but I don’t give it away. Sanders is referencing a specific percentage of the base budget for Afghanistan operations largely. But he’s leaving out that most of the budget goes toward troops, equipment and other operational support, as well as secretive counterterrorism funding from intelligence agencies.

I take a vote: A chunk of the room goes with Mostly False, but almost as many people could see Half True. (Mostly False was our rating.)

The audience questions are lively and a bit skeptical. They want to know how we screen for biases in prospective reporters, or if we stack our staff with equal numbers Republicans and Democrats. (We hire nonpartisan journalists, so personal beliefs are not relevant.) They want to understand the mix of finances that supports our work.

A man near the front asks whether our partnership with the Gazette-Mail is with the “Gazette side of the paper or the Mail side,” because the formerly dueling newspapers kept their liberal and conservative editorial pages in the merger. Executive director Aaron Sharockman fields that one, saying we are teaming with the newsroom and neither division’s opinion writers.

Then it was over.

Over three days in West Virginia, we tried to meet as many people as we could. We had a roundtable meeting with state GOP officials. We had drinks with the Junior League and chatted with College Republicans in Morgantown. I said hello to the local Rotary Club and explained our new commitment to West Virginia fact-checking in an interview with a conservative-leaning radio station. At Black Sheep Burrito and Brews, we gave away pint glasses and sipped just-tapped cream ale.

In our honor, they named it “Fact Check.” Counter-protesters hold up signs featuring The Washington Post’s Pinocchio falsehood rating at the edge of a rally protesting the GOP tax bill Nov. 15, 2017, at the U.S. Capitol. (Photo by Chip Somodevilla/Getty Images)

Before Charleston, we brought our fact-checking tour to Tulsa, Oklahoma, and Mobile, Alabama — two more red states where we didn’t have a pre-existing local partnership.

The idea for “pop-ups” surfaced during an editors’ brainstorming session after the election.

We knew we had a problem: Potential readers were writing off mainstream media fact-checking as biased. We were less sure of how this could be solved. More than ever, though, we wanted to try.

We came up with several ideas that aim to expand our audience (including a new app, PolitiTruth) and better explain our journalism, with the help of a Knight Foundation grant.

In each of the three pop-up cities, we’ve partnered with newspapers that can run our fact-checks for free alongside their coverage of local government, education and crime. We also produce fact-checks on local and state races and issues as we can in those states. (The Alabama special Senate election was gang-busters.)

It’s too soon to know whether our micro-experiment is a success. I think of the visits as planted seeds, nurtured by our accountability coverage running in the local news.

This spring, we hope to return to the three cities to learn if any minds about fact-checking were changed.

After the library, we pack up our stickers and computers and signs and head to the Red Carpet Lounge near West Virginia’s Capitol. Inside we find legislators and cheap drinks after a day of debate on state road bonds.

One man introduces himself as a conservative operative. When he finds out we’re from PolitiFact, he unloads. He remembers a False we gave to Rick Santorum like it was yesterday. He said we were wrong.

There’s still more work to do.

Katie Sanders is the deputy editor of PolitiFact, a nonpartisan fact-checking website started by the Tampa Bay Times. She graduated from the University of Florida and covered the Florida Legislature and pundits for PolitiFact before stepping into her editing role. She can be reached at ksanders@politifact.com. On Twitter: @KatieLSanders

Previous story
When journalists aren’t trusted, corruption often follows
Next story
What I wish I knew before I took my first reporting job