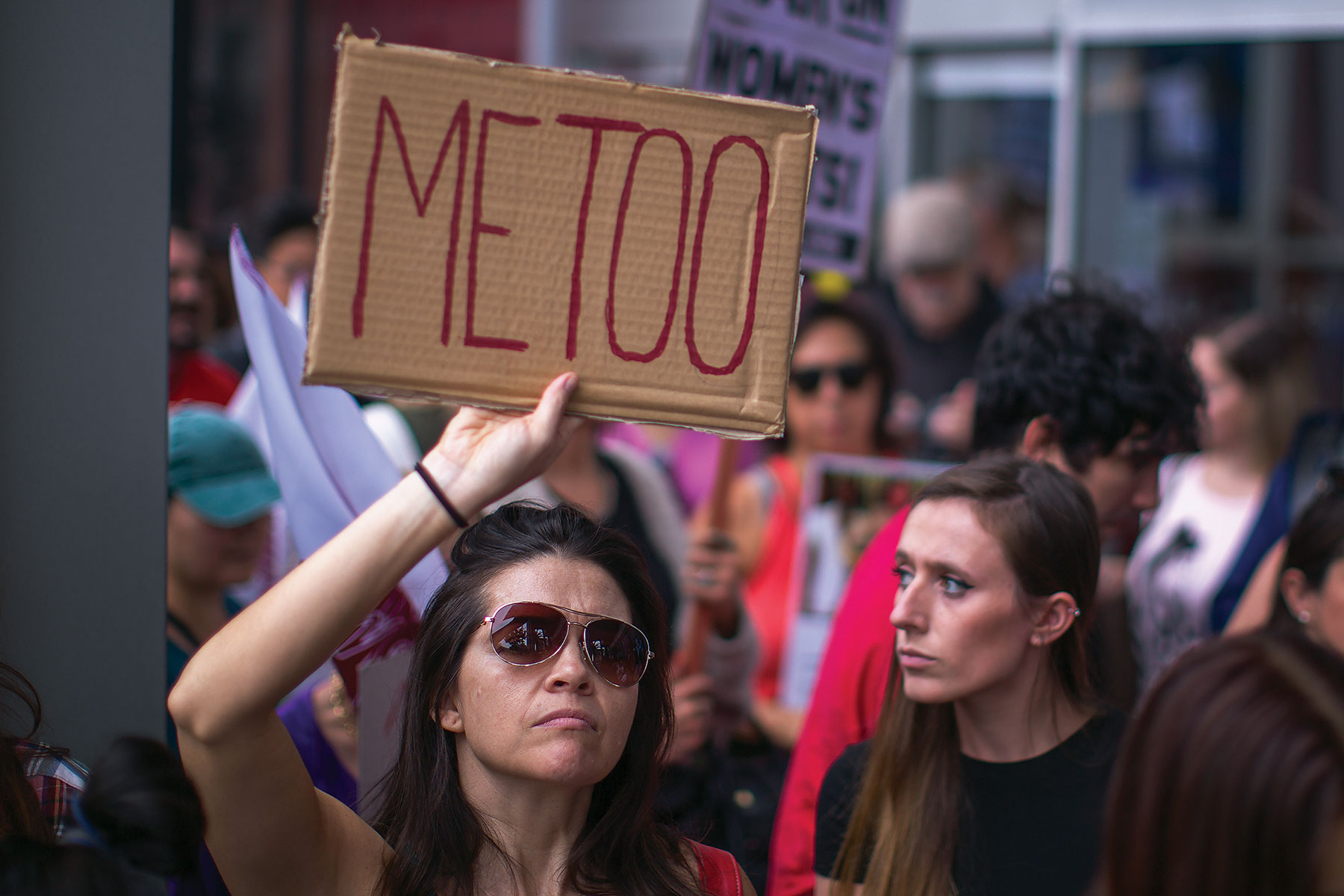 How newsroom culture is being re-evaluated following #MeToo

After The New York Times and The New Yorker’s groundbreaking exposés of disgraced Hollywood mogul and serial sexual abuser Harvey Weinstein, it wasn’t long before women in journalism began raising their hands to say, “Me too.”

Powerful media figures such as MSNBC’s Mark Halperin, NPR’s Michael Oreskes and Leon Wieseltier, a former editor at The New Republic, were ousted from their jobs after women propelled by the “Weinstein effect” came forward with incriminating allegations of sexual harassment and assault. Meanwhile, a crowdsourced list of “Shitty Media Men” circulated around U.S. newsrooms faster than hot pizza on election night.

As the mighty began to fall, many scrutinized NBC News’ decision to spike the Weinstein reveal written by Ronan Farrow, a staffer who instead sold the story to The New Yorker. “How Did NBC Miss Out on a Harvey Weinstein Exposé?” asked The New York Times. “Why did NBC News let the Weinstein blockbuster get away?” questioned The Washington Post. According to Poynter, NBC News boss Noah Oppenheim told employees that “the incredible story that we all read … was not the story that we were looking at when we made our judgment several months ago.” Farrow, for his part, has said he believed his story for NBC News was already in good shape after months of rigorous investigation.

Following Matt Lauer’s departure from the NBC News network amid allegations of inappropriate sexual behavior, the questions grew louder. “Matt Lauer’s firing casts NBC’s call on Ronan Farrow in a whole new light,” screamed The New York Post. Meanwhile, Breitbart and other right-wing commentators claimed liberal mainstream media had been covering up for Weinstein for years. “NBC News appeared to be just another cog in a corrupt machine willing to do anything to protect anyone on the left, even an alleged serial sexual predator,” wrote Breitbart Editor John Nolte.

An industry whose success depends on credibility and transparency was suddenly teetering on the precipice of massive public distrust.

“Undoubtedly any time there’s any kind of trespass that’s made public, it damages the media, said Ann Marie Lipinski, curator of the Nieman Foundation for Journalism at Harvard. “We have less credibility.”

Public trust in journalism, especially newspapers, has been falling steadily since the dizzy heights of the ’80s and ’90s. However, a Gallup poll published in June 2017, four months before the Weinstein scandal broke, showed an uptick in American confidence in print media. More than a quarter (27 percent) of those surveyed stated “a great deal” or “quite a lot” of confidence in newspapers compared to 20 percent of people in 2016’s record low. Almost a quarter (24 percent) of people said they had high confidence in television news. Online news scored the lowest, with just 16 percent of respondents saying they trusted news they read on websites and social media.

Yet allegations of sexual misconduct have hit media across all platforms, from broadcast, television and legacy outlets to new media organizations such as Vox, whose editorial director, Lockhart Steele, was fired for sexual harassment.

Neither is age a factor. In fact, the most common denominators among many of those accused is that they are straight white men who held positions of power over those who claim to have been victimized by them. As women continued to come forward with stories ranging from unwanted touching to threats and physical assault, it became clear that these were not isolated incidents but an epidemic threatening the credibility of an entire industry.

Unlike other professions that require high levels of trust, such as doctors or police officers, in journalism the audiences tend to be bigger and more personally engaged. Our listeners, viewers and readers invite us into their lives every time they open a newspaper, turn on the radio, tune into a TV broadcast, log onto our news sites or seek us out on social media. They carry us with them on cellphones that nudge them with breaking news alerts and allow them to flip open their favorite news app while waiting in line at the local coffee shop. Hoda Kotb, left, Savannah Guthrie and Dylan Dreyer sit at a table during a break on the set of NBC’s “Today” show on Nov. 29, 2017 in New York. That was the same broadcast during which Guthrie announced that longtime “Today” host Matt Lauer had been fired for sexual misconduct. (Photo by Drew Angerer/Getty Images)

For the millions of people who watch the “Today” show each morning, Matt Lauer is as recognizable as their own father. So when a string of sexual misbehavior allegations against Lauer came to light – including that he summoned a female colleague to his office, dropped his pants and showed her his penis – it’s not hard to see how some viewers might feel personally affronted.

The allegations against Lauer, though, don’t seem to have done “Today” any harm. Quite the opposite, in fact. At the end of last year, Adweek reported that despite Lauer’s departure, the NBC show had the highest ratings of any U.S. morning show for the fourth consecutive week. Similarly, “CBS This Morning” didn’t experience a significant drop in viewers after Charlie Rose was fired following a report of sexual harassment.

Over at NPR, the resignation of top editors Mike Oreskes and David Sweeney amid sexual misconduct allegations did nothing to diminish donations to the station’s annual end-of-year pledge drive, which increased 7 percent from the previous year. While the sexual misconduct allegations have fueled the fire for critics of the media, the investigative and hard-line approach taken by most news organizations demonstrates an accountability that appears to have counter-balanced much of the backlash.

“Name another industry where that self-examination and then revelation is coming from within,” Lipinksi said. “Media are hard on themselves. We focus our investigative attention on all kinds of industries and all kinds of individuals, but we also focus upon ourselves. The fact that these stories are coming out of the most important journalistic ethos is a promising aspect to all of this.”

Where investigations have revealed evidence of sexual misconduct, many of those accused have been fired or forced to resign. The one notable exception is New York Times White House correspondent Glenn Thrush. In November, Vox published allegations from four female journalists of sexually inappropriate behavior by Thrush, including unwanted kissing and touching. Thrush, a former star reporter at Politico, was suspended without pay while the matter was investigated. The Times later released a statement admitting it had found he had “behaved in ways that we do not condone.”

However, Thrush was allowed to remain employed at the company, albeit no longer on the White House beat, and with an agreement that he would undergo training “to improve his workplace conduct.” New York Times reporter Glenn Thrush works in the Brady Briefing Room at the White House after being excluded from a press gaggle by White House Press Secretary Sean Spicer in February 2017. The Times suspended and later reassigned Thrush after the publication of several reports saying he had inappropriate sexual behavior with women. (Photo by Mark Wilson/Getty Images)

“While we believe that Glenn has acted offensively, we have decided that he does not deserve to be fired,” said Executive Editor Dean Baquet in the statement. “Each case has to be evaluated based on individual circumstances,” he added. “We believe this is an appropriate response to Glenn’s situation.”

The Times’ decision was met with loud criticism on social media. Writing for The Guardian, columnist Jessica Valenti stated that “for a global leader like the Times to do this, it sends a clear message to women in media: One man’s career is more important than all women’s.”

But as many media outlets re-examine their newsroom cultures in the wake of #MeToo, seats are opening up for diversity. When Hoda Kotb replaced Lauer on “Today,” joining Savannah Guthrie, for the first time one of America’s most popular morning shows was hosted by two women, and one of them was a woman of color.

“I think we’re in sort of a house-cleaning moment,” says Rebecca Baker, president of the Society of Professional Journalists. “There’s been a space that’s been created for women – and men – who have been victims of harassment to step forward and to finally be believed.”

Other news organizations have responded to the wave of sexual harassment claims in various ways. The New York Times has reminded staff of its anti-harassment and nondiscrimination policies and has set up an anonymous hotline to make it easier for employees to raise an issue or file a complaint. CBS News is organizing “more personal and direct” training. NBC News is looking at all of the above.

Yet most news organizations have been surprisingly reticent to reveal the procedures they have in place, if any. A Columbia Journalism Review survey failed to elicit a single response from any of the 149 newsrooms contacted for a report on staff policies and training around sexual harassment. This is where journalism’s ideals collide with the corporations that own news outlets and with HR departments’ reluctance to reveal policies that are so obviously failing.

The journalists employed by those newsrooms, however, were more forthcoming. Sixty-six percent told CJR their companies had clear sexual harassment policies, although only 21 percent strongly agreed that they understood those policies. Some 34 percent said they disagreed or strongly disagreed when asked if they understood their newsroom’s policy. For freelancers, the situation is more worrying. Eighty percent told CJR they would not know how to report sexual misconduct involving newsrooms with which they work.

At the beginning of this year, 130 leaders across journalism and the media gathered at the Newseum in Washington, D.C., for The Power Shift Summit. The invitation-only event aimed to enable a discussion about what newsrooms and media organizations are doing to deal with emerging sexual misconduct cases and what systemic changes are needed for the future.

Speaking at the summit, Lauren Williams, editor-in-chief at Vox, highlighted the need to put rules and guidelines into place to “create an environment that’s not just well-meaning for employees but proactively protecting them.”

In the same vein, Baker believes news outlets can continue to build and regain public trust by taking the lead in how they address inappropriate sexual behavior in the workplace. In a recent blog post, she laid out four ways for journalists to ensure their employers develop a healthier newsroom culture:

The incentive for newsrooms to have firm policies in place isn’t just about trust, she says, but will also help prevent creative, hardworking journalists from leaving their jobs, or even the industry altogether, because they’re getting harassed.

“That can go a long way,” she explained, “not just to regain public trust, but also to allow talented journalists to be able to do their job without concern for their safety and their careers.”

After all, if we can’t establish trust within our own newsrooms and media organizations, how can we expect the public to trust us?

Abigail Edge is a is a British freelance journalist based in Denver, covering news, social justice, and digital culture. She is also an SPJ trainer for the SPJ Training Program, powered by the Google News Lab. To find out more about organizing free Google tools training for your newsroom, conference or organization, visit spj.org/google.asp or email abigail@abigailedge.com.

Tagged under: Women in Journalism, diversity, me too, sexual harassment, women

Previous story
What I wish I knew before I took my first reporting job
Next story
To regain trust, journalists should tell our own story