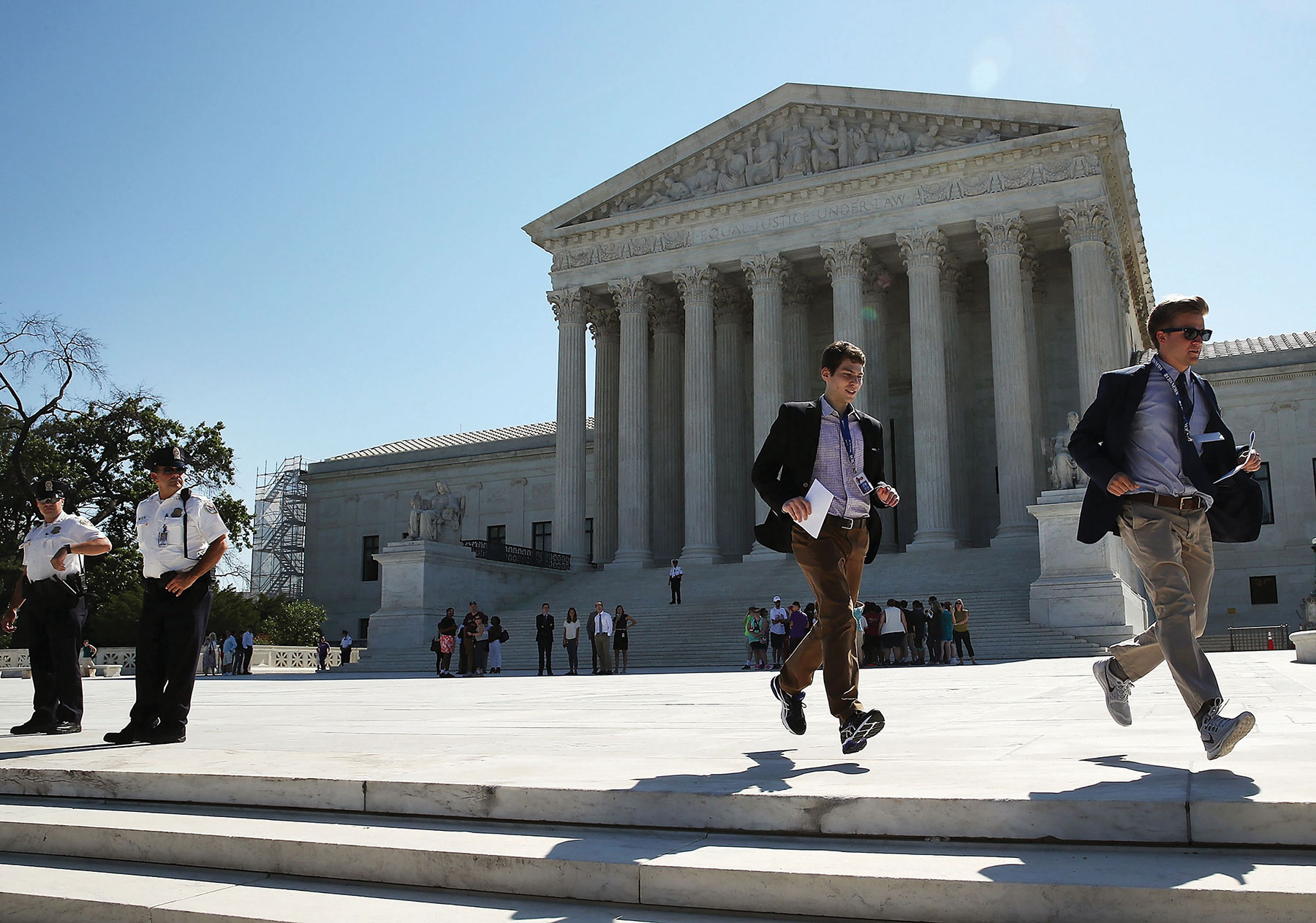 Lawsuits and #MeToo changed internships — for the better

While those concepts are widely believed, they are less widely put into practice. But in the past few years, and especially in 2018, there’s been a shift in the industry.

The Fox Searchlight lawsuit in 2011, a case where unpaid student interns sued Fox, caused companies to re-evaluate their internship programs to comply with labor laws. The #MeToo movement revealed many cases where treatment of interns, in terms of harassment and misconduct, were swept under the rug.

Internships in media are as important now as they’ve ever been. They are crucial for meeting contacts in the business and getting hands-on experience. But over time, internships have become more important because they supplement skills students wouldn’t traditionally get in the classroom.

“In the old days, it was about getting work experience. Today, there must be some sort of educational element,” said David Burns, associate professor and internship director at Salisbury University in Maryland. “It’s extending the classroom a little bit more as opposed to 35 years ago when it was all about getting as much professional experience as you could.”

Kayla Miller is a post-graduate intern with MLive Media Group in Michigan. She started in August 2017 and has been given the freedom to work as a typical reporter. She has her own beat, higher education, which she said worked out well because that’s what she reported on in college.

“My favorite part is the actual, real experience I’m getting,” Miller said. “It’s not something where they’re giving me little handout articles or bottom of the barrel stuff. I’m doing real work that matters to our readers.

“I feel like I’m a full-time reporter alongside my colleagues and co-workers because of the experience I’ve gotten here.”

The idea of an internship today is to be able to make connections between what students have learned in class and what they’re doing in their work at an internship. That wasn’t always the case. This educational focus — especially for paid interns — shifted after the landmark case against Fox Searchlight. In 2011, several unpaid interns for Fox Searchlight were working on the movie “Black Swan” and believed they were doing work that should be paid as employees, so they sued Fox.

Courts use the Primary Beneficiary Test – a seven-part criteria that determine whether interns working for “for-profit” employers are entitled to minimum wages and overtime pay under the Fair Labor Standards Act. Ultimately, Fox Searchlight failed that test and their interns.

1. The extent to which the intern and the employer clearly understand that there is no expectation of compensation. Any promise of compensation, express or implied, suggests that the intern is an employee—and vice versa.

2. The extent to which the internship provides training that would be similar to that which would be given in an educational environment, including the clinical and other hands-on training provided by educational institutions.

3. The extent to which the internship is tied to the intern’s formal education program by integrated coursework or the receipt of academic credit.

4. The extent to which the internship accommodates the intern’s academic commitments by corresponding to the academic calendar.

6. The extent to which the intern’s work complements, rather than displaces, the work of paid employees while providing significant educational benefits to the intern.

7. The extent to which the intern and the employer understand that the internship is conducted without entitlement to a paid job at the conclusion of the internship.

The case was settled in 2016, and the interns who sued, won.

Not only do students need to learn from the internship, the type of work they do determines whether paying them is the right (and legal) thing to do.

“It’s critical to the survival of the industry that [media companies] come up with a way to compensate people fairly for their time,” said Carolyn McGourty, co-founder of Press Forward, a new initiative to stop sexual harassment in newsrooms and create safe and healthy workplaces. “How you treat and compensate those just starting in the profession speaks to a lot about the values of your workforce and the attitude towards your workforce.

“We can’t be careless with those who have dedicated their lives to journalism.”

Harper’s Magazine faced a lot of backlash on social media when it shared a tweet about a full-time summer internship in New York City that was unpaid.

“With college being as expensive as it is, students often have to work in order to just help supplement their college education,” said Jill Geisler, Bill Plante Chair in Leadership and Media Integrity at Loyola University Chicago and Newseum Institute Fellow in Women’s Leadership. “Doing that and having an unpaid internship cuts off the ability for people of less economic means to be in the job market and to have an advantage in the job market.”

Rebecca Aguilar, a freelance journalist with over 35 years of journalism experience, never had an internship. As one of five children in a family with immigrant parents, she couldn’t afford to take an unpaid internship.

“Everybody assumes we can all have internships, but we can’t. We have to work,” Aguilar said. “If you’re a poor kid, no matter what ethnicity, no matter what background — if you are paying your way through college, you need every minute to make a dollar to either pay for the next year or pay for those loans that are coming soon.”

Aguilar said getting an internship is just as important as having a fair opportunity to get one.

“The reality is, if we continue to have unpaid interns in this industry, the only people who can afford to be in the industry are those who can afford to be unpaid,” McGourty said. “So, we lose a lot of diversity with our potential future workforce. … We need all the perspectives we can get.”

McGourty said she would like to see the journalism industry learn and understand that interns aren’t just a source of cheap labor, but they can be a source of talent and help the industry prepare for the future.

“The most successful companies pay their interns, and they treat them like employees; they invest in them before they hire them,” McGourty said.

For example, at Goldman Sachs, paid internships are competitive and seen as a type of apprenticeship versus someone paying dues. Many universities encourage and sometimes require students to have internships. One thing that’s a little bit negotiable and different at every institution is how many hours a student needs to document to receive credit.

Some organizations just don’t have that much work for them. So, going in, organizations need to know how many hours the students need to get, and they need to make sure they have enough legitimate, educational work to do during that time. There still needs to be an educational benefit to the internship.

During a “Power to the Interns” panel, conducted as part of the Newseum’s “Power Shift Project,” Tracy Grant, managing editor at The Washington Post, said interns at the Post are paired with a professional partner who also is a former intern because they understand what the experience is like. Once a week, they have cross-training so their experiences are as broad as possible.

“It really helps when everybody is looking at this as an educational experience,” Burns said. “The organization looks at it like a mentorship, and the school sees it as a partnership.”

For as long as internships existed, news directors, editors and academics focused on helping students land those internships, Geisler said. No one talked about the potential for interns to be exploited, not just in free work, but potentially to be harassed and to be the subject of sexual misconduct.

“We didn’t talk to interns about how [they] should respond if someone professes interest in your career but wants that interest to be discussed over dinner or over drinks,” Geisler said during the “Power to the Interns” panel. “Who should you tell? What should you be concerned about?”

Maya Raghu, director of workplace equality and senior counsel at the National Women’s Law Center, added this is a problem in every workplace, not just newsrooms.

“What we’re seeing is people feeling empowered to come forward and speak up when they see something that’s happening that, in a way, people haven’t necessarily done before on this scale,” Raghu said.

Under Title IX and Title VII, universities and employers have an obligation to their students and employees, but unpaid interns don’t have the same legal protections as their paid counterparts.

This is where universities need to educate their students, and employers need to be educated as well, because being compliant isn’t enough, Geisler said.

The Mayborn School of Journalism at the University of North Texas provides a guide for students with internships or outside placements about how to recognize sexual harassment in the workplace and what to do about it. Inya Baiye, Title IX coordinator at UNT, told “Power to the Intern” attendees in a recorded message that teaching students as young professionals to be intolerant of sexual misconduct will create a future where it doesn’t exist.

Geisler teaches news managers how to have difficult conversations with employees, for example if they have to give their employee bad news or critique their work. Those situations can often be uncomfortable because they were not trained to critique subordinates, they were trained to be journalists.

In light of the #MeToo movement, she started training students and managers on how to have difficult conversations, framing it as, “How do you have a tough conversation about inappropriate behavior or language if you’re not the boss?”

“The lack of those skills can make us more vulnerable and cause us to remain silent,” Geisler said.

In 2016 the U.S. Equal Employment Opportunity Commission released a major report about sexual harassment. The report found several risk factors that exist in workplaces, including, but not limited to, lack of diversity and too much diversity, workplaces with many young employees, workplaces that have both high-status and low-status employees, isolated workplaces and workplaces that tolerate, encourage or expect alcohol consumption.

“Sexual harassment and discrimination are about power,” Raghu said. “Dismantling those power structures means real systemic and cultural change if we’re going to prevent this from happening in the first place.”

“If you’ve heard something that is just totally inappropriate, and you’re the least powerful person in the room who wants to make a good impression, how do you speak truth to power?” Geisler said at the panel. “How do you report things that aren’t quite right? And how do you document those things?

Young employees should not be afraid to go into the workforce. What’s important is they realize the shift that’s currently happening and keep their eyes open for anything out of the ordinary.

“Nothing about what I’m teaching young people makes me hesitate to send them into a newsroom,” Geisler said. “Newsrooms are still the best place to do great work in a democracy. One of the skills we have to learn is how to stand up in the face of harassment.”

Anna Gutierrez is the communications coordinator for the Reporters Committee for Freedom of the Press. Previously, she worked for SPJ as the communications coordinator – a post-graduate intern position. She regularly contributes to Quill and has written and edited for Indulge Magazine in Fort Worth, Texas, and the Bulletin, the monthly magazine for American Mensa. Connect with her on Twitter, @annaxgabriela.