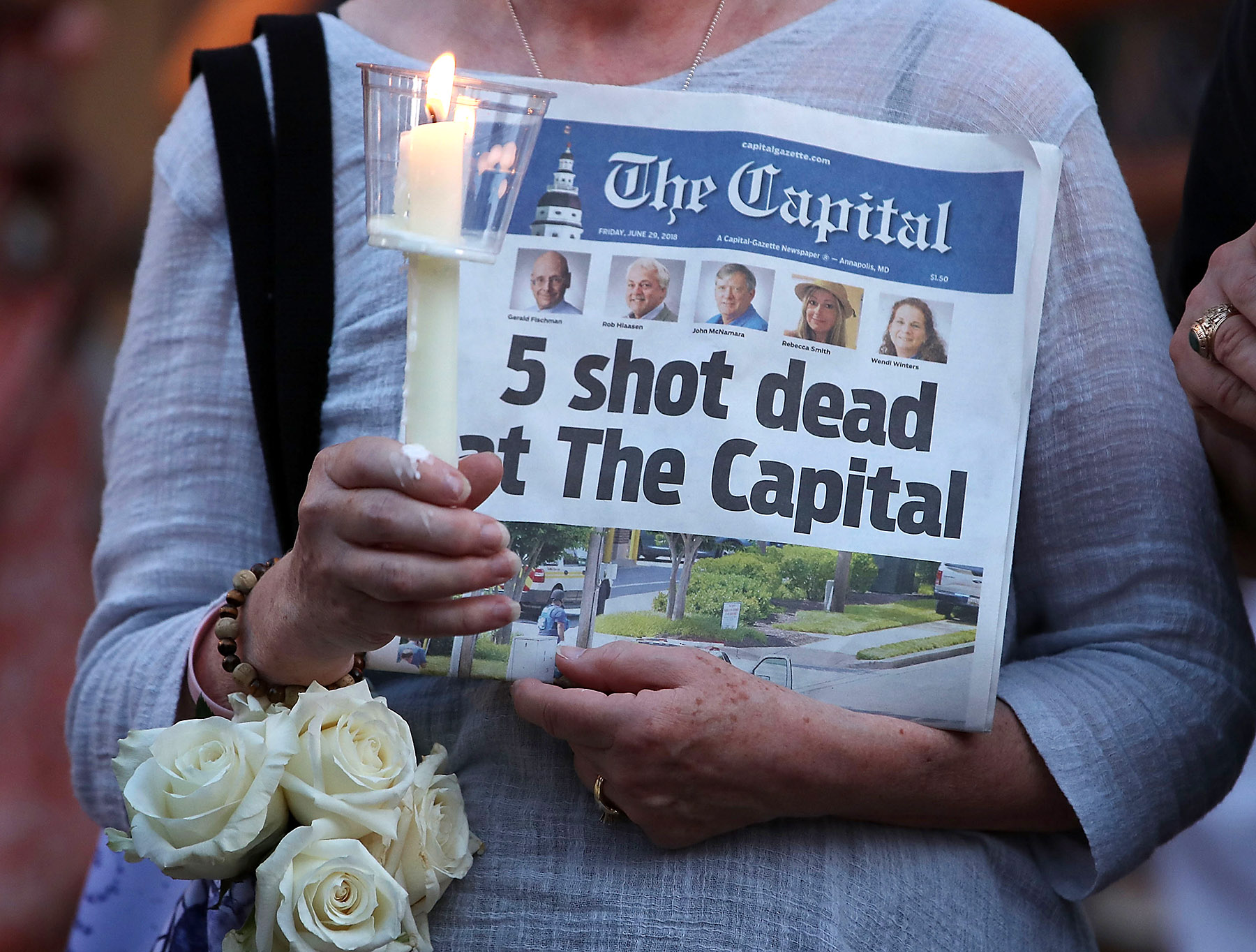 Annapolis community: Slain journalists ‘were part of us’ A woman holds an edition of the Capital Gazette newspaper during a candlelight vigil to honor the five people who were shot and killed on June 29, 2018 in Annapolis, Maryland. (Photo by Mark Wilson/Getty Images) ANNAPOLIS, Md.  — When Jessie Haynes first heard about a shooting at the Capital Gazette, across the street from the mall where she works, she assumed it was carried out by someone featured unfavorably in a news story.

It didn’t cross her mind, as it did many journalists across the country, that the shooter might have been inspired to attack a newsroom by rhetoric coming from the U.S. president, who has called the press the enemy of the American people.

While we do not know all the factors that motivated the suspected shooter, Jarrod Ramos, it seems clear Haynes’ suspicion had merit. Ramos had pleaded guilty in 2011 to constantly harassing a woman on Facebook, and the newspaper wrote about the case. “I said it was probably focused on one person by somebody who had a vendetta,” said Haynes, 36, who had a Capital Gazette delivery route in her early 20s and had heard reporters often were threatened by crime suspects who didn’t like how they were portrayed in news stories.

While Haynes did not know any of the people killed in the shooting two months ago Tuesday, she had a connection to the newspaper and generally views it as a credible news source. Many other residents also have connections to the victims — Gerald Fischman, Rob Hiaasen, John McNamara, Rebecca Smith and Wendi Winters — and feel similarly. Those killed were their kids’ parents and grandparents, members of their church, their neighbors — not their enemies.

Speaking at a vigil the day after the shooting, Maryland House Speaker Michael Busch, told the massive crowd his daughter had played soccer with Winters’ daughter. “They didn’t come from someplace else,” he said of those who died. “They were part of us.”

Surveys consistently show people trust local media more than national outlets. Part of that comes from knowing people who work for local news organizations, which is much more possible in places like Annapolis, the state capital with a population of 39,000.

In Annapolis, civic leaders, politicians and even the clergy have publicly advocated the need for a free press, said Helman Gomez, a minister and hospital chaplain. And it started before the newspaper shooting, he said.

It’s important for Americans to be informed about the world around us, Gomez said. And they must be willing to accept accurate news, even when it’s not good, he said. It is important for Americans to be informed, says Helman Gomez, a minister and hospital chaplain. (Photos by Getty Images, Rod Hicks)

“We understand that there are issues that are hard to talk about,” he said. “But when we talk about them, we grow as a community.”

There are people in town who don’t trust what they read or see on TV. Brian, a bartender in his 20s, said the media are too liberal and too opinionated. He said he has turned to The Economist and Bloomberg, both national sources, because in his view, they just report the facts and “don’t lean left.”

Anne Arundel County, home to Annapolis, traditionally has been more politically conservative than the state. While Hillary Clinton won more than 60 percent of the vote in Maryland during the 2016 election, she barely carried Anne Arundel County and became the first Democratic presidential contender to do so in more than five decades.

Stephen Tillett, a pastor and president of the local NAACP chapter, wants to soon organize a forum in Annapolis that explains the history of the free press and its value to citizens. He mentioned the idea days after the shooting but wanted to put some distance between the tragedy and the forum. Part of the message he wants to get across is that the press isn’t perfect, but it is still vital.

“There have been times that I’ve been at odds with the Capital, but I didn’t want anybody dead,” Tillett said.