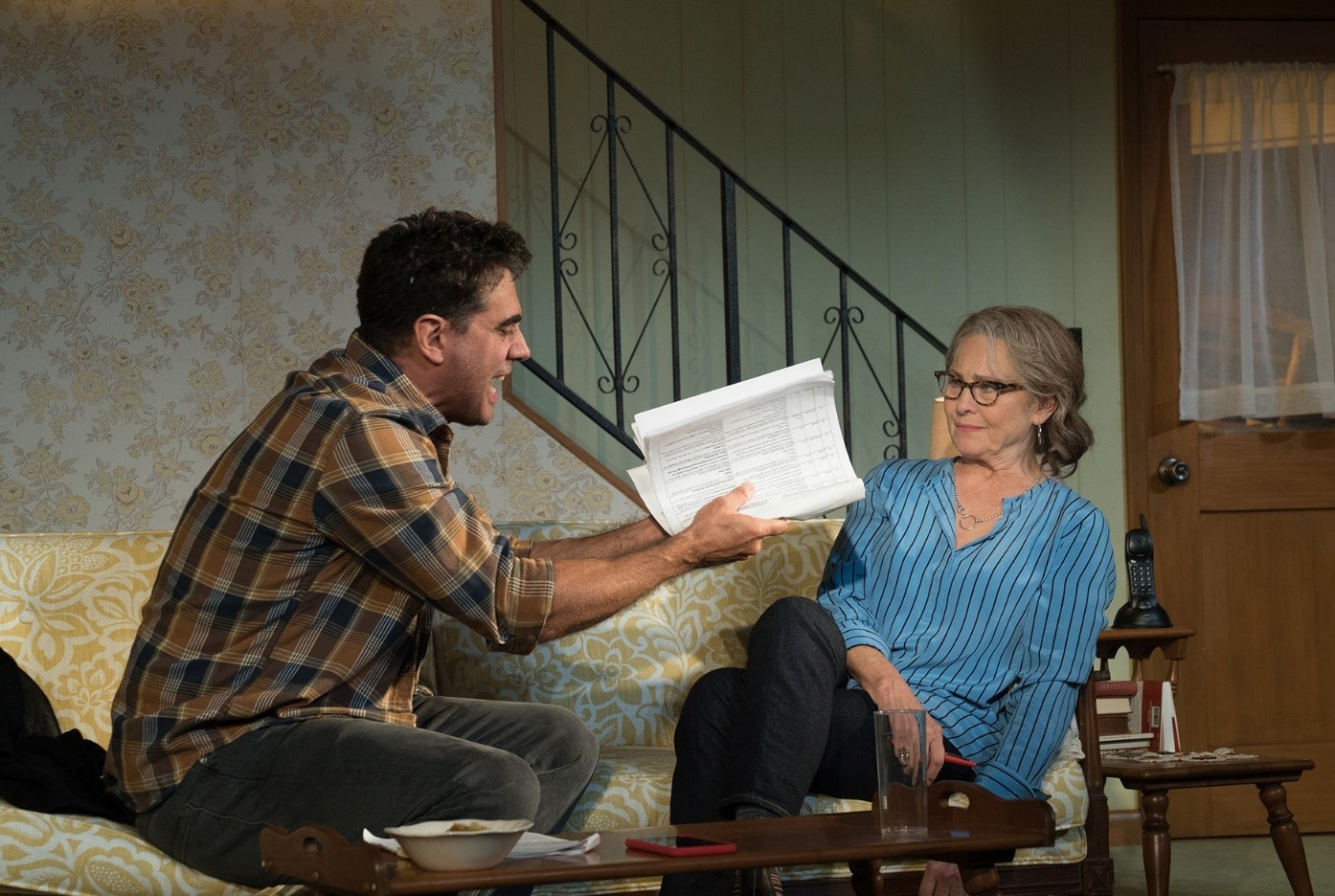 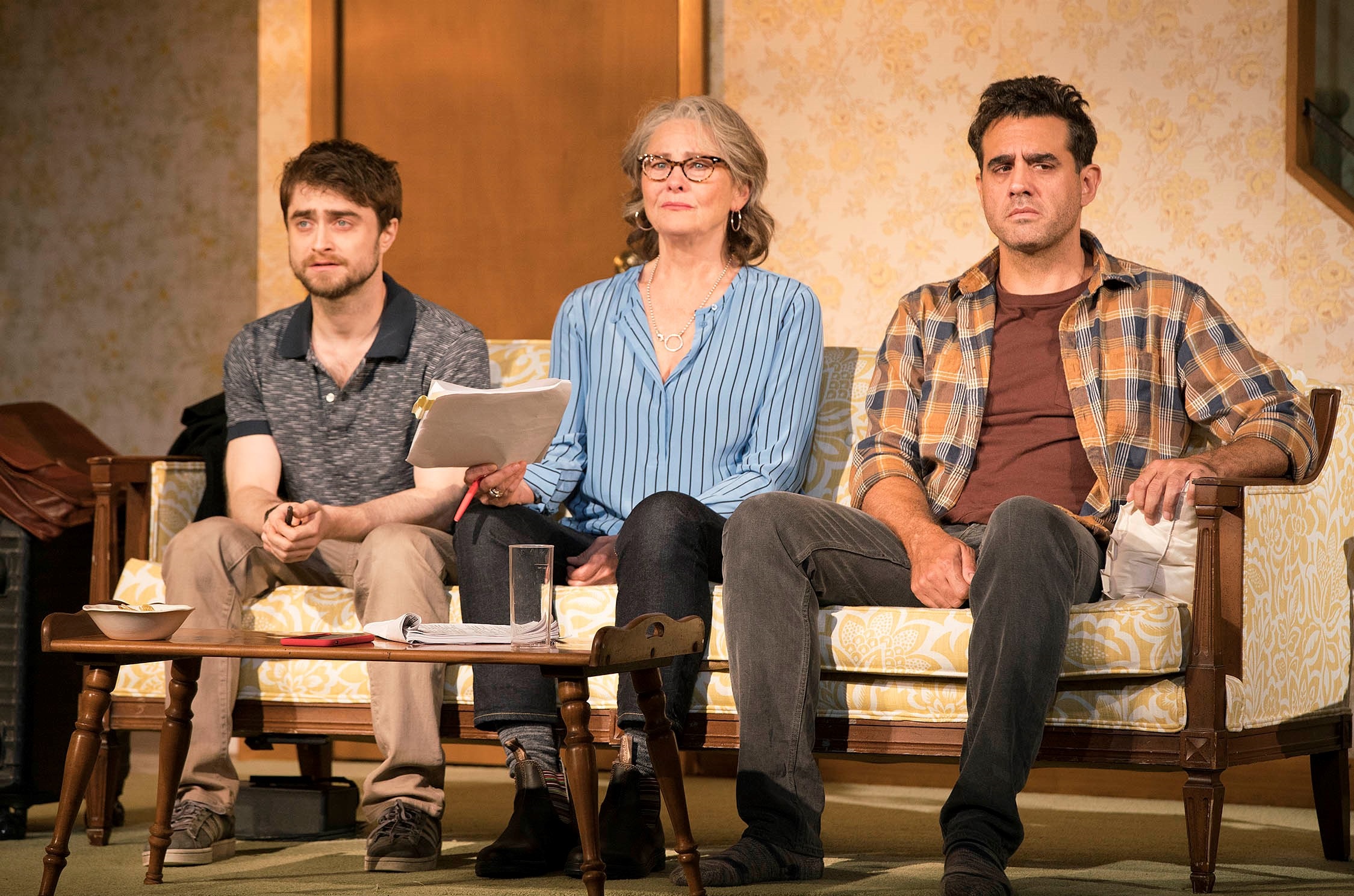 Daniel Radcliffe, Cherry Jones and Bobby Cannavale star in “The Lifespan of a Fact” on Broadway. (Photos by Peter Cunningham)

Early in the Broadway play “The Lifespan of a Fact,” an editor uses corporate-speak to explain why the fact-checking department at her magazine was done away with, drawing a spattering of laughs from the audience.

The woman behind me whispered to her companion, “The ones who laughed at that are all the laid-off journalists here tonight.” In an equally hushed tone, her friend replied, “There’d be more here, except they can no longer afford New York theater prices.”

Did that exchange of dialogue in the darkened Studio 54 theater actually happen, or I am using that bit of dialogue to make a point in this article you’re reading? And, to take it a step further, do the details really matter, as long as I’m capturing the essence of what happened that night?

Those types of questions, and the broader debate of what truth is, what facts are and if they are in fact one and the same, constitute the central focus of “The Lifespan of a Fact,” a hilarious three-person comedy that’s billed as “based on a true-ish story.”

Starring Daniel Radcliffe, Cherry Jones and Bobby Cannavale, the play is loosely based on the real-life conflict between an unorthodox magazine writer and the young intern charged with fact-checking his lengthy essay. (Don’t dare call it an article, which the author repeatedly makes clear in the play would be an insulting term to describe the literary prose he crafts.)

Although the play takes significant liberties with the story, adding the character of the glossy’s editor, for instance, and shortening the action to a five-day period with a hard deadline upping the tension, “The Lifespan of a Fact” is based on a 2012 book of the same name co-written by John D’Agata, the actual essayist at the center of the story, and Jim Fingal, the fact-checker who found inconsistencies in D’Agata’s piece about a teenager’s suicide in Las Vegas in 2002.

The real-life tug of war between D’Agata and Fingal stretched seven years, and the essay was eventually published in The Believer, a San Francisco-based literary magazine, after Harper’s rejected it after factual inaccuracies were uncovered during the editing process.

In this engaging theatrical version, the battle between D’Agata’s sense of truth and Fingal’s insistence on facts starts slowly but quickly escalates, until the two men literally come nose to nose in D’Agata’s living room.

Fingal, played to frazzled, nerdy perfection by Radcliffe, fiercely chases down the veracity of each detail in the essay. D’Agata, portrayed with delicious macho swagger and unwavering ego by the powerful Cannavale, counters that he’s “not beholden to every detail,” instead trying to capture the “music” of how one teen’s tragic death reflects a broader picture of the hopelessness embodied in the Las Vegas strip, its trappings and its inhabitants.

Jones, as seasoned, savvy editor Emily Penrose, plucks the fresh-out-of-Harvard Fingal to give a once-over to D’Agata’s essay, hinting that the author might be known to play around with facts. A line that drew loud laughter was her advice to the eager intern about fact-checking the piece: “If there’s a person mentioned, confirm they exist.”

Very early on, in the essay’s lead, for example, Fingal questions D’Agata’s reporting. The writer states in the first sentence that there were 34 strip clubs in Vegas on the day of the teen’s death, when Fingal’s digging clearly shows there were actually only 31. When D’Agata explains that he chose to write that there were 34 “because I liked the rhythm,” the battle lines are clearly drawn in the epic back and forth that ensues over the next 95 minutes.

Audience members are drawn into question for themselves whether it makes any real difference if the bricks of a building mentioned in the piece were red or brown, whether the name of a bar was The Boston Saloon or Buckets of Blood, how many cars constitute a traffic jam, or if the 16-year-old’s plunge from a rooftop lasted eight seconds or nine, all referenced in the essay. To the Fingal character, the answer is an unequivocal yes. D’Agata, however, passionately argues that there is “a world of facts to choose from,” adding that the details he’s selected are not only “improvements” to what actually occurred, but that the facts can “get in the way of the story.”

The crux of the play is summed up best when D’Agata, feeling cornered by Fingal’s doggedness and fearing he’s losing Penrose’s support for his essay, bellows, “I’m not interested in accuracy! I’m interested in truth!”

That pivotal moment in the clash between both men and their philosophical positions regarding truth is also what makes “The Lifespan of a Fact” as timely as it is entertaining. Even with its topics stretched to exaggerated, comical proportions, the play, written by Jeremy Kareken, David Murrell and Gordon Farrell and directed splendidly by Leigh Silverman, casts the spotlight on the ongoing, serious discourse about “alternative facts,” ethics in journalism, and rampant charges of “fake news,” founded or otherwise, from the current president on down.

In cultural and political discussions in particular, who gets to determine if a fact is indeed a fact has come into question, and a prominent public figure famously declared “truth isn’t truth” in the past year—hardly the high point in history for good ol’ facts.

For journalists, the play’s essential questions perhaps give us yet another chance to reflect on what it is we do, why we do it and how we might do it better, even if in this case it’s by looking into a funhouse mirror. As much as the barbs of “enemy of the people” have been pernicious, being forced to defend ourselves and the profession of journalism has led to reflection and soul-searching, some would argue both long overdue.

Are there valuable lessons about journalistic integrity, who gets to decide what’s true, and if it’s ever acceptable to blur the facts for the sake of a more interesting story entrenched in the witty banter of the play? That depends on whom you ask.

Kevin Lerner, an assistant professor of journalism at Marist College, took his class of 12 students enrolled in a seminar titled Fake News/“Fake News” this semester to a performance of “The Lifespan of a Fact.”

Seeing the play on Broadway as well as reading the book for the class—and observing how the details of the story itself were tweaked and twisted from page to stage—led students to a deeper discussion about fact versus truth.

And the play was a good springboard for lessons throughout the semester in Lerner’s class at Marist about how journalists should seek “the best obtainable version of the truth,” as Carl Bernstein puts it.

“What I try to get across to my students is the tension: on the one hand, the capital-T Truth may always be inaccessible to a reporter, and accurate reporting of facts may not be enough to get society to a real understanding of that kind of truth,” Lerner said. “But at the same time, factual accuracy is an essential baseline for reporters, and if you’re going to work and not get caught up in some kind of existential crisis about whether or not journalism can even exist in a world where truth is inaccessible—well, then you have to come up with a definition for yourself about how you can get the best possible version of the truth that is available to you by deadline. That’s what the best reporters do. They’re never entirely satisfied with the truths they’ve discovered, but that’s what keeps them going to the next deadline.”

Peter Canby, a senior editor and the head of the fact-checking department at The New Yorker magazine, said that while he found the play “hilarious,” it would be difficult to extract any serious questions about truth or journalistic ethics, much less any valuable answers to them, from a show rooted more in farce than facts. “Both the book and the play are built around dolled-up dialogue between Fingal and D’Agata, so it’s hard to look at this as an example of what really happens in the editing process at a magazine, or as a source for serious discussion about actual journalism,” said Canby, who met briefly with Radcliffe during a visit to The New Yorker’s offices when the actor spent time alongside fact-checkers to get a clearer sense of their jobs. “The result is a very funny play with a very talented cast, but I wouldn’t say that there are any serious questions about journalism in the play that we should be looking to take away from it. Those questions exist, just not in this really entertaining play.”

Canby, who has also written feature stories for The New Yorker, Harper’s, The New York Review of Books, The Nation and other leading publications, said he views any debate about a difference between facts and truth or a writer’s search for “deeper truth” without facts to support it as “fundamentally flawed.”

Said Canby: “If you stick to the factual story carefully and thoughtfully, it will reveal more about the truth than if you start trying to make literary or poetic versions of the story that supposedly reveal deeper truths.”

As with most things in journalism, the chance to see “The Lifespan of a Fact” has a looming deadline. The play’s limited run ends Jan. 13. Go see it if you can. It’ll make you laugh. It’ll make you think. And, in fact, it’ll make you appreciate fact-checking even more.

Previous story
Ten with Jacqueline Thomas
Next story
Edit like a boss: cool tools help you master the trade