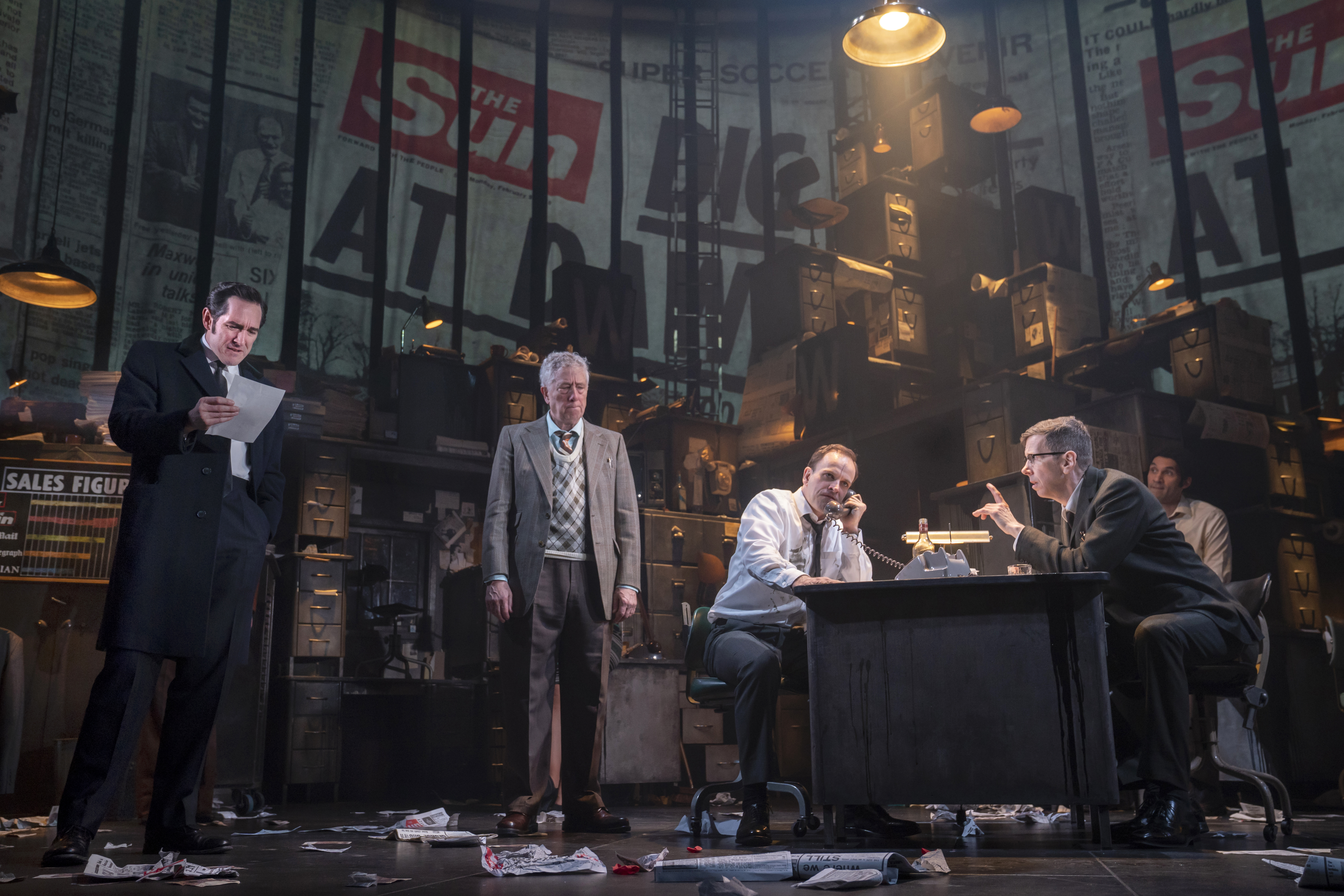 Playwright James Graham’s “Ink” imagines tabloid emperor Rupert Murdoch’s origin story, rooted in a 1969 London we barely see, amidst London landmarks that are named but not evoked, told by characters sometimes half described. 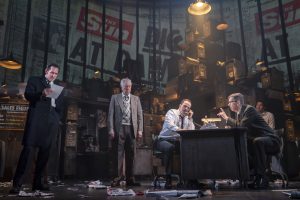 James Graham’s “Ink” tells of the rise of Rupert Murdoch’s media empire. The Broadway production has been nominated for six Tony Awards including Best Play. Photo by Joan Marcus.

As directed by Rupert Goold, “Ink” is alternately dimly lit and rock-show raucous and never quite bold enough for a world grappling with the future of democratic society and the role of media.

This play about a proud purveyor of today’s “fake news” is presented in part as a vaudeville parade of cast-off upstarts we are intended to cheer on their journey to assembling a paper, and in part as a parade of jaw-dropping media shenanigans involving kidnappings and hookers and criminally low pay for journalists. It offers, at worst, a dangerous mess and, at best, an artistically inconsistent bit of theater.

Murdoch, a big talking, profession-smashing Australian businessman, has come to London to shift tabloid journalism into a whole new gear. He purchases the Sun newspaper from a larger conglomerate, and hires Lamb to edit and build a staff from cast-off misfits. The script has publisher Rupert Murdoch (stolid Bernie Carvel) and editor Larry Lamb (excitable Jonny Lee Miller) frame their story to one another, editor teaching publisher, as it were. 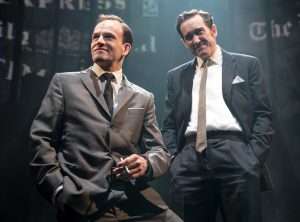 In a ham-handed bit of storytelling, owner/publisher Murdoch asks his editor, Larry Lamb, “What makes a good story?” – but he and we know the answer.

Rather than laughing, Lamb answers him, musing that he used to think the “why” of a story was the most important. But now he thinks it gets in the way of the suspense. He isn’t about looking for truth but seeking the hook. Knowing the why, he says, kills the story. If you don’t answer why, a story can run forever.

For Lamb, who takes the lead on Murdoch’s new newspaper whim, the only thing worth asking is “what’s next.”

What’s lost is what we expect of a good dramatic story: an argument, some suspense and perhaps a surprise or two along the way.

As shown here, the tabloid Sun’s first year under Lamb’s editorship involves name dropping of individuals who will mean little to American ears – so the story feels like a ragtag group of misfits putting on a show. There’s even a conga line and singing at one point.

A flimsy poster board and an easel showing a graph of sales goals (Sun versus its competitors) is moved around the stage to provide a cheap bit of dramatic tension – Murdoch challenges his team to beat the field within a calendar year. He fills out his sales pitch to Lamb with a call to his ancestral ties and parental obligations: make the paper that your working-class father would have wanted to read. 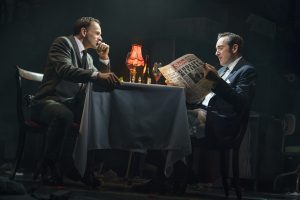 The script doesn’t make entirely clear what motivates Lamb, though. There’s class – Murdoch only seeks a sales goal while Lamb is the degree-less lad in a class-bound society, testing the waters of propriety with lurid tales, bait and switch headlines and a topless women (from the side, tame by today’s standards) qualifying as news. And what else? The sales “clock,” and the whorl of stage business (remember that conga line) pull us through.

We know this story ends eventually with Fox News. Here, back in 1969, we see the acts of a rudderless editor violating norms of journalism left and right and watch the sales improve month by month. But we don’t learn to care deeply about any of the characters, how a newsroom actually operates or how all the pieces fit together.

The actors crawl around the furniture piles like goats which makes for fun and sometimes scary stage pictures, but the design doesn’t help illuminate the story. The detritus merely weighs down the proceedings, providing the occasional lamp-lit office cubby or the mountain to climb, but it’s a climb with no destination.

Today we live in Murdoch’s media world where theatrics meet real-life drama and with a reading and viewing populace increasingly unable to discern the difference. This production keeps us engaged with cranked up volume (music and sound design by Adam Cork), ramped up lighting (design by Neil Austin), and a stage full of inert furniture and informative projections way upstage, but the cartoon outlines of Murdoch and Lamb don’t illuminate the murk beneath.

Playwright Graham does not editorialize about Murdoch’s or Lamb’s ethics. The former is a businessman who sees a new market to exploit human tastes and the latter a striver who chooses the sordid way to success.

We are left to craft the “why” of this story as we, as a culture, explore how to climb out of the damage this story has left behind.