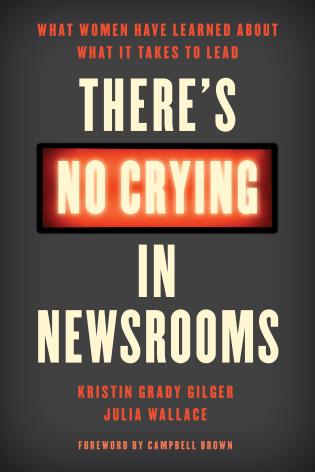 In the new book “There’s No Crying in Newsrooms: What Women Have Learned About What It Takes to Lead,” authors Kristin Grady Gilger, senior dean at the Walter Cronkite School of Journalism and Mass Communications at Arizona State University, and Julia Wallace, the first woman editor-in-chief at the Atlanta Journal-Constitution, share stories of groundbreaking women journalists.

In this excerpt, the authors explore what’s changed—and what hasn’t—in newsrooms. 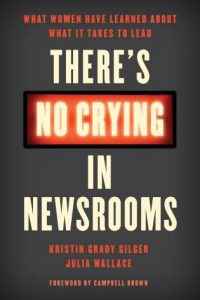 Women who entered the news business in the 1970s and 1980s relished breaking barriers. They called in news stories while in labor and parked their babies under their desks. They had “trailing spouses” who followed them from one end of the country to the other, or they skipped marriage and children altogether, unable or unwilling to sandwich in a personal life against the press of the news.

They learned to navigate a world that was male to its core—and they were called pushy broads and worse for their efforts.

These women accepted and even welcomed the challenges they faced, partly for personal reasons and partly because they felt that history was on their side. They chased exciting careers doing important work, and they believed that in doing so they would clear the way for generations of female journalists after them.

What they never imagined was that decades later, women would be facing many of the same barriers.

In 2018, women in media held fewer positions of power, were promoted more slowly, and made less money than their male counterparts. And, as the #MeToo movement has so vividly illustrated, women still contend with sexual predators as well as a range of lesser but no less toxic behaviors that former television executive Kate O’Brian describes as “plain old disrespect.”

“I find it surprising we haven’t made more progress,” said Madhulika Sikka, who entered the business in the 1980s and went on to hold top jobs at NPR and The Washington Post. “I don’t think we did all this work and tried to be role models and examples to other women just to tell them now, ‘Well you’ve just got to keep sucking it up.’”

Susan Goldberg remembers the disbelief she encountered in 1987 when she became the first female managing editor of the San Jose Mercury News. When she was introduced to people more often than not the response was an incredulous, “You’re the managing editor?”

She doesn’t think the reaction would be much different today. “I would like to tell you I’m having a totally different conversation than I had thirty years ago, but it’s the same conversation, and it’s so frustrating,” said Goldberg, who now heads National Geographic. “There are fewer women running newsrooms now than there were then. It’s astounding.”

Excerpt from “There’s No Crying in Newsrooms: What Women Have Learned About What it Takes to Lead,” by Kristin Grady Gilger and Julia Wallace, Roman & Littlefield Publishing Group, Inc., 2019.

Tagged under: Women in Journalism, women

Previous story
Video: Celebrating SPJ’s 110th at the place where it began
Next story
From the President: Carpe diem