From the President: Carpe diem 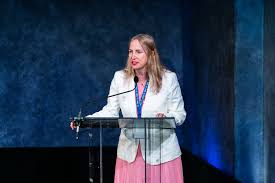 One hundred ten years ago, 10 young men dressed in black and white ceremoniously entered the chapel at DePauw University in Greencastle, Ind. and pledged their faith to the power of journalism. Their youthful idealism gave rise to the Society of Professional Journalists. Our grand experiment has undergone many transformations since being founded as an all-male fraternity. Yet a bright line courses through our history because the spirit of our Society has remained true to the vision of our founders.

In The Roaring ’20s, graduates who had belonged to the Sigma Delta Chi fraternity formed the first professional chapters in cities dotted across the map. In 1960, delegates at the national convention voted to transform the organization into a professional association, with both student and professional chapters, and they established the regional system.

Women were first admitted 50 years ago, after protesting the all-male membership rules with placards reading: “The Fourth Estate Is Out of Date” and “Journalists Are Women Too.” Within a month of the vote by the delegates at the 1969 convention, 70 women had joined, including the nationally syndicated advice columnist Ann Landers and New York Times reporter Charlayne Hunter.

More recently, SPJ broadened the political representation of members in its national decision-making. In 2011 the convention approved “One Member, One Vote,” which extended the ballot for the national board elections to all members, rather than just those chapter leaders who could make it to the annual convention. In 2016 SPJ again gave members a greater voice in its national affairs by creating an opportunity for those who were unaffiliated with chapters to attend the convention as delegates.

Arguably, each of these metamorphoses enhanced SPJ by extending either membership or a voice in leadership to a greater swath of the journalism community. In our organization’s current climate of transition, our members and leaders should, once again, transform challenges into opportunities.

We have many reasons to be optimistic about our Society’s future. Our vibrant freelancer community knits together independent journalists across the country. Our Education Committee puts journalists in classrooms in our #PressForEducation program. Our Legal Defense Fund and Freedom of Information committees serve as watchdogs by signing legal briefs and educating the public on their FOIA rights. Our Ethics Committee serves as the standard-bearer of our vaunted Code of Ethics.

I’d like to draw particular attention to our newly revamped Membership, Generation J and Diversity committees, and to the inspiring group of journalists that the latter has attracted to our annual conference through our Dori Maynard Diversity Leadership Program.

Our partnerships with other journalism groups are another boon to SPJ and will offer even greater advantages in the future. Once again we are cohosting our Excellence in Journalism Conference this year with the Radio Television Digital News Association and the National Association of Hispanic Journalists. These two groups have formed the bedrock of our growing partnership network. In April we held SPJ’s first partnership summit, bringing together more than 30 press freedom groups in New York. This was an unprecedented show of solidarity by American journalism nonprofits ahead of the United Nations Educational, Scientific and Cultural Organization’s annual celebration of World Press Freedom Day. Some of these groups are already expressing interest in future collaborations.

Recently, when executive-director search consultants asked what I saw as SPJ’s greatest opportunity, a single word flashed into my mind: diversity. After all, barriers were made to be broken, just as our women journalists did back in ’69. Today we must endeavor to do likewise and make SPJ more appealing to journalists representing all aspects of diversity. From the daughters of undocumented immigrants to the sons of gay parents, we must welcome all into our fold. Furthermore, we must create a pathway to leadership at the local, regional and national levels so anyone regarding us will see a truer reflection of 21st-century America.

In this time of transition for our Society, we must not perpetuate the stultifying status quo. We fought hard for the right of all members to cast ballots in our national elections, so be sure to vote Sept. 5 to 7. And while you do so, think about what message you want to send to our current and prospective members.

Today our dedicated volunteers exude the same spirit of sacrifice and faith in the power of journalism as those 10 young men who entered a chapel on April 17, 1909. They will continue to do so well into the future, as long as we keep bringing new leaders into the fight for press freedom. It is time to seize the day.