As the Society of Professional Journalists celebrates its 110th anniversary in 2019, it may come as a surprise that SPJ did not have its signature Code of Ethics for the group’s first 17 years.

In 1909 when the young men at DePauw University founded SPJ as a college fraternity, Sigma Delta Chi, one of their goals was “to advance the standards of the press by fostering a higher ethical code.” But they could not agree on just what that code would be. So a committee to write a code was appointed in 1919, and for several years it tried to put forth a code all could support. However, an agreement never came.

Finally, in 1926 someone suggested that SDX simply adopt the “Canons of Journalism” that the American Society of News Editors had established three years before. 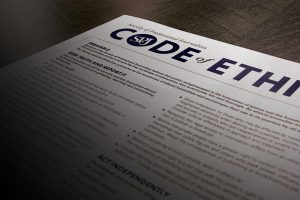 At the 1926 convention held in Madison, Wisconsin, SDX did just that, and the ASNE canons became the first of five different ethics codes that SPJ has used in 110 years.

What was new: Everything. SDX didn’t have an ethics code before this.

The journalist’s duty: “The primary function of newspapers is to communicate to the human race what its members do, feel and think.”

On plagiarism: Not mentioned.

Conflicts and gifts: Not mentioned.

Corrections: “It is the privilege, as it is the duty, of a newspaper to make prompt and complete correction of its own serious mistakes of fact or opinion, whatever their origin.”

The 1926 Code, with its somewhat stilted language, reflects its time. It speaks only of newspapers. Its concern for details is based on print: “Headlines should be fully warranted by the contents of the articles which they surmount.”

But it touches upon issues that will show up in each iteration of the Code, including:

Although the founders had made ethics a primary concern when organizing the fraternity, and the 1926 convention had formally adopted a set of precepts, it is worth noting that there is no mention of this development in “The Sigma Delta Chi Story” by William Meharry Glenn, a history published in 1949.

Ethics remained a concern of SDX leadership, however. The first Ethics Committee was appointed in 1948.

That committee drew up a code and would have established an “impartial board of review” to handle flagrant violations of the code. The proposal was tabled when it came to a vote in 1951.

How to deal with transgressions remained a running theme for a number of years as SDX leaders grappled with the ethics question and whether any code could be enforced.

Gifts and spiffs from sources was another recurring theme during the 1950s and 1960s. The issue came to a head when Ford Motor Company held a conference of college editors in 1964 and gave each one a demonstration car to take back to campus and use for the rest of the semester.

Press ethics and journalistic objectivity hit the front pages across America in 1969 when Richard Nixon’s attack-dog vice president, Spiro Agnew, took on “the nattering nabobs of negativism” in the press.

Agnew charged that journalists operated from a “privileged sanctuary” and that they should be “made more responsible to the people they serve.”

After Agnew’s attack, SDX leaders decided it was time to revisit the idea of a new ethics code. Casey Bukro of the Chicago Tribune spearheaded the effort, resulting in a code that was adopted unanimously at the 1973 Buffalo convention.

What was new: Bukro’s group used the same general format as the 1926 Canons, updating “newspapers” to “media” or “mass media.” A proscription against gifts was adopted.

The journalist’s duty: “The Society of Professional Journalists, Sigma Delta Chi, believes the duty of journalists is to serve the truth.”

On plagiarism: Not mentioned.

Conflicts and gifts: “Gifts, favors, free travel, special treatment or privileges can compromise the integrity of journalists and their employers. Nothing of value should be accepted.”

Corrections: “It is the duty of news media to make prompt and complete correction of their errors.”

Enforcement: At the end of the 1973 Code, there is a “pledge” that states, “Journalists should actively censure and try to prevent violations of these standards, and they should encourage their observance by all newspeople.”

The Code was adopted within its first year by 20 major newspapers across the country, and journalism textbooks began to include it as part of college curricula. The SPJ Code of Ethics was on its way to becoming the gold standard among journalistic ethics codes.

Within the next two decades, two significant additions were made to the 1973 Code that warranted calling the 1987 Code a separate entity.

In 1984, a passage decrying plagiarism was added. Three years later, the pledge calling for “censure” of violators of the Code was replaced with the following:

On plagiarism: “Plagiarism is dishonest and is unacceptable.”

Enforcement: “Adherence to this code is intended to preserve the bond of mutual trust and respect between American journalists and the American people.”

The following decade, an expanded ethics committee, led by Kevin Z. Smith, undertook the task of completely rewriting the code.

The process took two years. The committee’s work was rejected by the 1995 convention in St. Paul, Minnesota, whose attendees wanted more membership input. When the group returned the following year to the convention in Washington, D.C., it was approved unanimously.

The 1996 Code adapted the current format of identifying four key precepts, followed by bullet points addressing important issues. Those are:

What was new: A new, more accessible format. Organization under four key precepts.

The journalist’s duty: “[P]ublic enlightenment is the forerunner of justice and foundation of democracy. The duty of the journalist is to further those ends by seeking truth and providing a fair and comprehensive account of events and issues.”

Enforcement: Journalists “should expose unethical practices of journalists and the news media.”

The SPJ Code of Ethics never has been intended as a set of rules similar to those that govern other professions such as law, medicine or accounting.

Despite periodic proposals to enforce “censuring,” there is no disciplinary system for journalists. In some locations, “press councils” that allowed citizens to air grievances against the media were established; however, they mostly have disappeared.

The lack of a disciplinary enforcement system did not stop lawyers bringing defamation claims to seek to use the Code of Ethics in their cases. The Code, went their argument, established a standard of care for journalists. Its breach was the equivalent of journalistic malpractice. Of course, this result never was the intention of any drafters of any of the Code versions.

At the urging of SPJ’s lawyers, in 2009 a disclaimer was added to the Code: The current version states that the Code “is not a set of rules, rather a guide that encourages all who engage in journalism to take responsibility for the information they provide, regardless of medium.”

It concludes that the Code “is not, nor can it be under the First Amendment, legally enforceable.”

Shortly after its adoption, the 1996 Code, which had updated ethics at the end of the century, already started to sound obsolete, thanks to the explosion of the internet.

In the 2000s, social media networks such as Facebook and Twitter were born. With WordPress and some other publishing platforms, anyone could be a publisher. Anyone could be a journalist.

Yet another new Code was needed.

In 2013, then-SPJ President David Cuillier appointed Kevin Smith to chair another drafting committee to look at ways to make the Code applicable to these developments. [Disclosure: I was a member of the committee that revised the Code].

The product that emerged in 2014 seeks to embrace all platforms and to provide the aspirational standards for citizen journalists who seek to provide information on a website.

There is no mention of “social media” per se, although there are echoes: “Remember that neither speed nor format excuses inaccuracy” is a line that was added. It applies equally to both Twitter and headline-writing.

The 2014 Code is a statement, in four precepts and 37 bullet points, defining “ethical journalism.” This version of the Code incorporates transparency, making the fourth precept, “Be accountable and transparent.” The bullets in that fourth section set out guidelines for interacting with the public, made much easier by computers and comment sections.

What was new: Use of definition of “ethical journalism” as structure. Addition of transparency. Recognition of journalist’s role as watchdog on government.

The journalist’s duty: “[P]ublic enlightenment is the forerunner of justice and the foundation of democracy. Ethical journalism strives to ensure the free exchange of information that is accurate, fair and thorough. An ethical journalist acts with integrity.”

Conflicts and gifts: “Refuse gifts, favors, fees, free travel and special treatment, and avoid political and other outside activities that may compromise integrity or impartiality, or may damage credibility.”

Corrections: “Acknowledge mistakes and correct them promptly and prominently.”

Enforcement: “Expose unethical conduct in journalism, including within their organizations.”

And perhaps remembering how quickly the 1996 Code seemed to age, the 2014 revision committee turned to the internet to keep understanding of the Code current. At the SPJ website, spg.org, there is an annotated version of the 2014 Code, with a series of links to articles and discussions of the different points of the Code.

The ethics committee can provide explanations and applicability as new platforms emerge and understanding unfolds.

The site allows for a “living Code,” to use the words of revision committee member and SPJ Past President Hagit Limor.

This year, SPJ is celebrating its 110th anniversary, and in San Antonio in September, all SPJers can raise a glass to the organization.

But mark your calendar. In seven short years, SPJ will have another reason to toast, as the society commemorates the first Code of Ethics and celebrates the 100 years since.

Author’s note: For the history and background, I used three sources: two society histories (“The Sigma Delta Chi Story” by William Meharry Glenn and “Talent, Truth and Energy” by Bert N. Bostrom) and “Journalism Ethics” by Fred Brown, who compiled the ethics codes in an appendix. The fifth edition of Brown’s book will be published later this year.

Paul Fletcher served as SPJ national president in 2015-16. A publisher and editor-in-chief at Virginia Lawyers Weekly, he is an adjunct journalism instructor at Virginia Commonwealth University and a member of SPJ’s ethics and FOI committees.