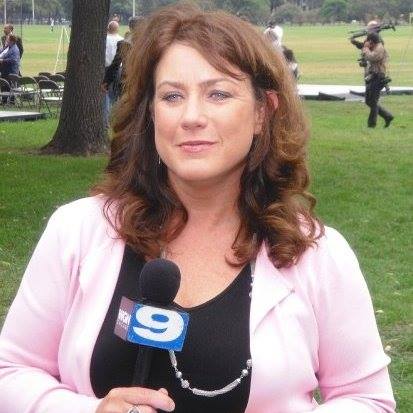 Marcella Raymond joined the WGN News team in October 1998 and serves as a general assignment reporter. In June of 2019, she was diagnosed with post-traumatic stress disorder. “Sharing my story is scary,” she said, “but I’m hoping we can address the stigma of PTSD, show the warning signs, and get real.” She added, “I’m not looking for your sympathy. I know many of you have suffered more than I. But maybe we can help each other.” 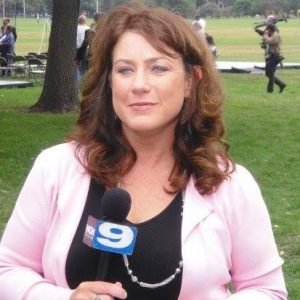 I had four martinis that night in early May. We were celebrating a big journalism award for a friend at the Palmer House in Chicago and that same friend had to drive me home. I passed out in her car. Once home, I fell into bed, dress, Spanx and makeup on. Soon after (I’m guessing), I started throwing up, then stepped into the shower fully clothed. Unable to stand, I laid in the tub, water flowing down on me, soaking my dress and my hair and smearing my makeup. I have no idea how long I was there. I couldn’t get up to vomit or pee, couldn’t move my arm. Paralyzed.

This was the end of a rabbit hole I had been going down for a couple of years and had ignored.

I went public with my post-traumatic stress disorder diagnosis because I knew I wasn’t alone. I’ve had many conversations over the years with fellow journalists about the struggles we have with the trauma we report on. Since then, I’ve had many journalists contact me, saying they understand. They had the same feelings and they didn’t know what to do or where to turn.

The story that broke me was about a boy named AJ Freund. He was 5-years-old when his parents allegedly beat him, put him in a freezing shower and sent him to bed naked. Within hours, sweet little AJ was dead. His parents reported him missing but every reporter, every cop, knew they were lying. We all knew.

I felt like I failed him. A lot of us did.

A week and a half before my breakdown, my phone on my night table kept vibrating no matter how often I ignored it. My assignment editor hoped I could confirm that AJ’s body was found. I turned on the TV and saw our helicopter hovering over a large field populated with detectives and evidence technicians. A tarp on metal poles covered a grave.

I went to work and eventually confirmed the body in that grave was AJ. No matter how disturbing the story, we have to try to get it first. No matter how deeply this story affected me, I had to cover it. But at what cost?

For me, one of the costs was an emotional breakdown. I collapsed over AJ and all the stories of dead kids I’d covered over three decades, an accumulation of emotion that became too hard to handle and push away. I collapsed over the suffering of every adult and child, the pain of everyone who loved them, the absolute fear that this would happen to my family.

Three decades of trauma I had been holding onto. Stories like the mom on meth who put her infant in a microwave. The dad who punished his kids by throwing six puppies into a wood-burning stove. The boy lured into an alley by members of his father’s rival gang and shot to death. The little girl shot to death in her car seat because her father was angry with his estranged wife.

I could go on and on. We see a lot. We try to talk to people on the worst day of their lives. We are in the middle of their grief. We know details we can’t tell the public because they are too disturbing. And we are never taught how to deal with it.

I wish someone had told me this and I didn’t have to learn on the job, didn’t have to navigate how to deal with someone else’s trauma. If you are told that you will become de-sensitized to it, it’s a lie.

Looking back, there were many signs that the job was getting to me. I would lash out for “no reason.” I had no patience. I would cry hysterically at little things that didn’t require that response. I overreacted. I had weeks of depression where I tried to figure out the cause and couldn’t come up with one. I drank too much to the point of being reckless. My stomach would turn, and my heart would race when I was going on a story that I thought would adversely affect me, like another devastating mass shooting.

I had anxiety and was hypervigilant to the point where I thought I was making my son crazy. I told him not to walk alone at night, to be aware of his surroundings, not to get drunk, to know how to get out if someone with a gun comes in. Every traumatic story I covered, I came home and told him how to protect himself. When he was younger, I would wake up in a sweat, my heart racing. Was he OK? I should call the school to find out. Even today, 18 years later, I have to talk myself off the ledge when my mind starts racing about his safety.

Still I had no idea I had PTSD. I mean, only war correspondents, soldiers and first responders get Post-Traumatic Stress Disorder. Jesus. I was a local general assignment reporter. I wasn’t dodging bombs. I wasn’t seeing people, some who were friends, blown up in front of me. I didn’t have to deal with the fact that I couldn’t save the baby from a burning house or that I couldn’t prevent an innocent person being caught in gang crossfire.

But I have been covering a story and heard bullets fired on the next block. I have been sitting in a crew car and felt like I was a target. I am constantly looking around while doing live shots to make sure people aren’t getting too close to me. I’ve had to call the police on people who are harassing me. I have seen more blood than I ever cared to. I have read all the disturbing details in a police report or a child services case worker report.

As in AJ’s case, I read about all the physical abuse allegedly at the hands of his parents, all the ignored or missed signs from state employees that he should have been removed from that house.

Unfortunately, in big cities like Chicago, crime is covered daily. With constant deadlines, there’s no time to think about it … until you find yourself alone drinking wine in the dark.

I asked my colleagues how they cope. They say try not to get too involved. Just put your reporter’s hat on and keep your distance. But I can’t do that. I jump into the fire with both feet. They go to therapy, talk to friends, family and other colleagues who understand. They search for the good in their lives. My friend Meghan keeps a container filled with all the things she loves and are positive in her life. When she has a bad day, she pulls out one of those pieces of paper and it makes her feel better.

Lots of them cry and then let go.

I’ve tried these coping skills, but they don’t work for me.  I’m too far gone to learn how to cope. The damage is already done.

I’ve been thinking about how to minimize the chance of other reporters ending up where I did. It starts in newsrooms. We need to pay attention as a newsroom. Not just by asking if you’re OK while standing at your cubicle. Who’s going to say “No?”

News directors should pull reporters who have covered trauma for days into their office for a debriefing, just like first responders. Then, if they need it, take them off crime for a week. Give them stories that do not involve grief or blood or death. Let them work on a feature or two that they’ve wanted to do but weren’t given the time. Make sure they know about the employee assistance program which allows them four free therapy sessions.

And reporters have to look out for each other. When a colleague had covered crime after crime after crime, I would tell producers that I’ll take the next one because I know how hard that is and how much of a toll it takes on your heart and mind. Let’s change the way things are done. Let’s take care of each other. We need balance so the bad doesn’t batter us day after day after day, causing wounds that are painful and difficult to heal.

Six months after my diagnosis, I’m still working in news in Chicago. But I anchor more and don’t cover crime. I can never cover crime again.

It’s been a daily struggle. I cry a lot. I get triggered easily. I can sit in my condo for days at a time. Eventually, I hope I will get to a place where I don’t have flashbacks of AJ in that freezing shower, where I don’t feel like this will never end, where I can find peace.

Want more information and assistance with the challenges of covering traumatic events? SPJ and other journalism groups frequently include workshops on secondary trauma at conferences around the country. Upcoming events include Self-care for the Resilient Journalist at the Women in Journalism Workshop in May at the Missouri School of Journalism. Also, Poynter offers a self-directed course here.

Previous story
A note from the next generation
Next story
Review: “Mike Wallace is Here”