In its final months on Pennsylvania Avenue before closing (see timeline, below), Washington, D.C.’s  Newseum presents an exhibit that explores an institution whose future seems as unknowable as its own.

“Seriously Funny: From the Desk of The Daily Show with Jon Stewart” celebrates the program that continues to evolve from its parody roots as self-proclaimed fake news into the current era of You Can’t Make This Sh*t Up. (Trevor Noah has hosted the award-winning Comedy Central show since 2015.)

Exploring the exhibit (which closes Dec. 31, along with the Newseum itself) provided plenty to think about regarding not just the show, but also the genre it helped spawn.

The exhibit begins with a primer on American satire and then goes on to explore and ultimately establish Stewart and his 16-year run in the higher echelon of the art form, putting him in such company as Mark Twain and Will Rogers, Lenny Bruce and the Smothers Brothers (who Stewart himself has acknowledged as his forefathers).

It starts with Stewart’s first on-air words, which were aimed at his predecessor Craig Kilborn, (who was not a fit for the show’s eventual destiny, but played a vital role in the creation of a reliably and damn funny rough draft).Then the exhibit ends with a page from Stewart’s last script. The modest-sized showcase winds through his tenure via highlight reels, issue and event deep-dives, and a very museum-y collection of more than 50 artifacts.

Those include show-branded microphones, political convention press passes and, as a centerpiece, Stewart’s desk behind glass. That home base also features an assortment of his camera-ready tools of the trade, including toothpicks, Kleenex, some Poland Spring and a mirror. Of these, a bottle of Purell hand sanitizer inspires the most questions: Was it pumped in anticipation of a guest, or as a ritual post-interview cleansing? If the latter, does there exist a tally of guests-to-pumps ratio? How many for O’Reilly? For John Ashcroft? For Slash?

Less speculation is required for the exhibit’s assessment of Stewart’s impact, articulated through its lengthy coverage of the show’s evolution from news parody to cultural and political heavyweight.

It spotlights such watershed moments as Steve Carrell’s “Straight Talk Express” and the Peabody-worthy Indecision X election coverage. These proved game changers not only for the show, but also for the dynamic between its brand of criticism and its targets, whether press or politician.

The exhibit also lays out the show’s evolving arsenal of satirical slings and arrows, from the less effective but prescient “Rally to Restore Sanity” to the more lethal and enduring, including Bush v. Bush. For the latter, Stewart “moderated” a debate between then President Bush and former Governor Bush to present and eviscerate political hypocrisy. (It’s noted that actual news outlets eventually adopted the same technique in order to, at the very least, show politicians contradicting themselves.) 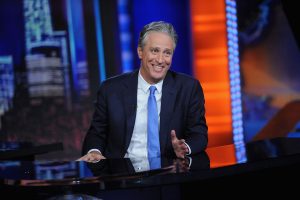 Stewart’s legacy is further emphasized by detailing, briefly, the trajectory of many of the show’s correspondents over the years, particularly those who have taken the reins in their own way, viewpoints and voice to steer satire and comedy in new directions. From Samantha Bee to Hasan Minhaj, Colbert, of course, John Oliver (dubbed the Investigative Comedian) to Wyatt Cenac, and finally Stewart’s successor Noah. For him, the exhibit devotes significant time, space and creativity, from a self-produced behind-the-scenes film of the current show to the suit he wore the first time hosting the program (huh?).

Stewart’s advocacy and passion on behalf of 9/11 First Responders is also given its due. Drawing comparisons to Edward R. Murrow, Stewart began using his position to prod an ultimately upsetting saga forward a decade ago on air, revisiting the issue with fury as needed. It culminated in June of 2019 with a viral Congress-shaming that perhaps may even, kind of, sort of, get actual and serious momentum toward, if not a just then a just-enough conclusion (for now … maybe).

Beyond the specifics of Stewart’s tenure, the exhibit inspired, for me, questions about political satire’s potency and what, exactly and tangibly, is its overall effect on the systems, persons, policies and societies that it targets.

It begins by declaring American satire a sacred First Amendment right, for which we should feel both gratitude and, in agreement with Stewart’s final scripted remarks — “If you smell something, say something” — vigilance.

Later, Howard Kurtz, media critic at Fox News is quoted as saying: “Merely being on ‘The Daily Show’ … was a sign of having made it … [and] then you could fire back and whip up a little exaggerated feud.”

So how much were the negative changes the Daily Show brought to the table recognized and used by the political pundits as a vehicle for their agendas?

Taken with two other bits of the exhibit, the theme becomes unavoidable: One highlighting Stewart’s awarding WWE wrestler Mick Foley the Medal of Reasonableness for his charity work and for “exemplifying sanity and reason everywhere but in his day job”; the other framing Stewart’s riveting and punitive interview with Jim Cramer as the “Cramer Smackdown.”

Stewart is credited with “disemboweling” one such show, “Crossfire,” by commentator Paul Begala and, more widely, for helping bring about its demise through his caustic dressing down of Begala and Tucker Carlson. (This is, wonderfully, also on view at the Newseum.)

During his appearance, Stewart himself made the allusion, somewhat, suggesting that the idea that “Crossfire” (and by extension, “Hardball,” “Hannity & Colmes,” “Meet the Press,” “Face the Nation,” et al.) was an actual debate was “like saying pro wrestling is a show about athletic competition.”

We know how to regard people who believe that wrestling isn’t fake but how do we regard those that believe the same way about wrestling’s poindexter political cousins? What’s the continuing value of these shows and segments?

Stewart thought about and commented on this, in a way.

At his “Rally to Restore Sanity,” he said, “The country’s 24-hour, political pundit perpetual panic conflictinator did not cause our problems, but its existence makes solving them that much harder … If we amplify everything, we hear nothing.”

But Stewart, in giving so much time to and legitimizing individuals such as O’Reilly may not be entirely without fault.

Thinking about it leaves me conflictinatored.

To process all this, I’ll fall back on another thought on wrestling, often misattributed to Will Rogers and Twain, among others.

It goes something like this: Never wrestle with a pig; you both get muddy and the pig likes it.

In his line of work, Stewart engaged, interacted with and perhaps validated his fair share – and maybe he had to in order to be as effective as he was. (Hence the Purell?).

Along with Murrow, he has also been compared to Walter Cronkite as a once- or twice-in-a-lifetime voice of trust and reason, ever in the face of their opposites.

That would seem to indicate he emerged from his time behind his desk without a lot of mud on him. And for that, he probably does belong in a museum.

Though it still does feel awfully soon.

Based in the Midwest, Matt Roland has been a features correspondent to the Indianapolis Star and Interview Magazine. As a playwright, his work has been produced in Indianapolis, Boston and New York, as well as published by Samuel French. He is a recipient of a Creative Renewal Arts Fellowship from the Arts Council of Indianapolis/Lilly Endowment.

April 17 — After maintaining galleries in New York and Nashville, the Freedom Forum — a nonprofit organization founded in 1991 that is dedicated to “free press, free speech and free spirit” — opens the original site of Newseum in Arlington, Virginia. Then-Vice President Al Gore delivers an inaugural address, touching on the importance of the Constitution and a free and open press.

March 3 — The Newseum closes to concentrate on building a new facility in downtown Washington, D.C. The institution’s education department stays in operation off-site and through school programs.

April 11 – After six years, the Newseum opens once again, this time in a state-of-the-art building on Pennsylvania Avenue. The new facility also debuts one of its defining features, Today’s Front Pages Gallery, displaying 80 newspaper front pages from around the world.

August – Unabomber Ted Kaczynski writes to the U.S. Court of Appeals objecting to the inclusion of his former cabin in the Newseum’s popular “G-Men and Journalists: Top News Stories of the FBI’s First Century” exhibit. While the exhibit has since evolved, the cabin has remained on-site.

August 27 – The Newseum marks the fifth anniversary of Hurricane Katrina through “Covering Katrina,” which examined the media’s response to the unprecedented disaster.

November 14 – As part of a collaboration with Paramount Pictures, the Newseum debuts “Anchorman: The Exhibit,” which includes props, costumes and footage from the Will Ferrell film.

May 13 – Controversy surrounds the Newseum’s annual rededication of the Journalists Memorial, a permanent two-story glass façade bearing the names and photographs of journalists who died covering the news. The confliction occurs when, under pressure from pro-Israeli organizations, the institution withdraws the names of two cameramen working for the Hamas-funded Al Aqsa TV. Their names are later reinstated.

May 16 – Collaborating with the Smithsonian Institution, the Newseum opens “One Nation With News for All,” an exhibit exploring the history of the immigrant- and minority-based press.

June 8 – For the first time in its history, the Newseum’s Today’s Front Pages Gallery goes dark, its rows of front pages blacked out as part of a campaign (#WithoutNews) to raise awareness of the threats journalists face around the world.

January 25 — After years of financial turbulence, the Freedom Forum announces its intention to sell the building to Johns Hopkins University, which will use the facility as a center for its DC-based graduate programs.

June 14 – the Newseum’s final temporary exhibit, “Seriously Funny: From the Desk of ‘The Daily Show with John Stewart’ opens.

December 31 — After 11 years on Pennsylvania Avenue, the Newseum will close to the public. Its future yet to be determined.