Bringing with him a résumé that included work as a hip-hop musician, a slam poet, a playwright, a performer and even a comic book author, Al Letson joined The Center for Investigative Reporting to help launch and host public radio’s first hourlong investigative journalism show, “Reveal.” Multiple Peabody, Emmy and Edward R. Murrow awards followed.

In this interview, Letson opens up about his personal story and the state of the media, and he shares insights from his time at “Reveal.” Edited excerpts follow. 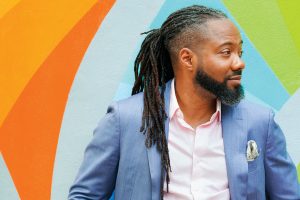 1  Hip-hop and poetry aren’t exactly traditional paths to journalism. How did you make that transition?

I was going about my life, doing my thing, when I saw a contest looking for new hosts and ideas for public media. This was long before podcasts were a thing. I applied and sent in a five-minute clip. My idea was to travel the country and tell the story of America from the ground up, because I felt like so much of the media was top-down. I won the contest and got my own show. That was my crash course into Journalism 101. I hired some really amazing journalists to work with me and learned by doing.

2  How does your history in the arts relate to your journalism–or vice versa?

As a radio journalist I’m constantly thinking about sound, so the way I work my voice and breath control is all about what I learned in slam poetry. When I’m editing a story, I think about all the fundamentals I learned from play writing. If you’re going to keep an audience’s attention for a 90-minute play, you have to figure out how you’re doing the arc of the story, where you’re going to shift things, and also the theme and truth that you’re trying to bring forward. All of those things come into play in the news business. We get the facts, and then we think about how to present these facts in a way that hooks people and brings them in.

3  The “Reveal” episode “Kept Out” investigated the routine denial of traditional mortgage loans to Latinos and African Americans and won a Peabody Award. What sparked that investigation?

That investigation was done by Aaron Glantz and Emmanuel Martinez. Rewind three years ago at this point. I went out to lunch with Aaron [and told him] I was looking at the history of redlining to understand the wealth gap between African Americans and white Americans. Aaron was like, “I think redlining is still going on, so I’m going to dive into it.” I said, “Okay, do your thing!” What we found was that lenders are doing a form of redlining that’s a little more subtle than what happened in the past. There’s a lot of places we highlighted where the local city councils and states are really trying to fix the problem. Doing this as an audio piece where you got to hear Rachelle Faroul [who faced overt discrimination in Philadelphia] talk about what happened to her makes a much stronger connection to a listener than if you just read it in a paper.

4  What’s your opinion on the state of diversity, inclusion and equity in the media?

A lot of people talk about diversity but really aren’t interested in diversity. It drives me a little bit crazy. I don’t go to panels about diversity or want to be on panels anymore. It’s not hard—you go out and hire people of color, LGBTQ (and others who are underrepresented) not because you’re trying to check off a box, but because it makes your newsroom better and stronger. It helps you cover the United States in a more holistic and smart way. The other thing is you hire these people, but you’ve got to give them opportunities to move forward, too. That’s just good Management 101.

5  In 2017 an image of you preventing an unarmed man from being beaten by protestors at the Rally Against Hate in Berkeley was all over Facebook. Give us some insight into that decision.

I was thinking, I don’t want to go home and say I watched this guy get beat and didn’t do anything. The world is going crazy, and I think in these crazy times we have to do things that are out of the norm in order to correct the course. Later I found out that the guy egged it on. He was threatening to fight antifa online in the days beforehand, telling them to come to Berkeley to fight. Where I’m from, we call them woof tickets. If you’re selling woof tickets, they gotta be cashed in. I’m not saying what’s happening to him was right, it just wasn’t as simple as this innocent dude standing there.

6  Is there a temptation to oversimplify? The thing that I hate about the news or the times that we’re in is that everything is complicated and nuanced, yet the media can simplify it because we want people to wrap their heads around it. But I personally think the simplification doesn’t give people the full picture. It’s complicated. You gotta figure out a way (as a journalist) to break those complications down and explain the nuance. It’s not easy though.

7  Are there stories you try to cover at “Reveal” that simply don’t pan out?

A lot of the stuff we do doesn’t pan out. We cast a wide net; we work on a lot of things. Sometimes we have to kill stories. Sometimes a story doesn’t feel like it’s reaching or doing what we wanted it to do. It’s about quality control. Because we’re doing investigative reporting, we have a really high bar of what we put out. We need to prove and back up everything we say. We never put out something that we’re not 100 percent sure about.

8  What do you know now as a journalist that you didn’t know when the show launched?

During the pilot, I interviewed Edward Snowden’s lawyer. It was the first time I did a confrontational interview. I didn’t realize it was going to be confrontational until a minute in. I was like, Holy shit, I’m in the middle of a heavyweight fight. And this guy was knocking me out. We were doing the best we could, but I am so glad that pilot is off the internet because it’s embarrassing how bad I got beat. If you had asked me then if I would ever do a confrontational interview again, I would say, “Oh, hell no.” But if you ask me now, I would say one of the things I want to do more of at “Reveal” is confrontational interviews, because I know how to do it now. I know how to prepare for it, ask hard questions and push back. I also know how to do it in a way that feels right for “Reveal,” because we’re not cable news. We don’t holler at people.

9  How does it make you feel to ask those tough questions?

What we’re supposed to do in the media is remove the cloak and shine a bright light on what people’s intentions actually are. The way you do that is by asking the tough, hard questions. It might feel uncomfortable for me to ask, but I stand for the people who are being affected by those policies. I owe my audience and the people who are on the other end of the rhetoric and getting squashed by it.

10  What has been the most useful feedback you’ve gotten?

There’s this song by Big Sean called “One Man Can Change The World,” and it came on when me and my son were driving somewhere. He looked up at me and said, “Every time I hear this song, I think about you.” Even thinking about it now I get choked up. I’m not a perfect human being, but I want to live a life where my kids know where I stand and who I am.