It reminded me of Secretary of State Mike Pompeo launching into a profanity-laced tantrum following an interview with National Public Radio anchor Mary Louise Kelly. She had asked questions about Ukraine — the country at the center of President Trump’s impeachment — that the secretary preferred not to address. It also reminded me of Sen. Martha McSally calling CNN reporter Manu Raju an insulting name when he asked if the Senate should consider new evidence at Trump’s impeachment trial.

This behavior isn’t new. But when the President of the United States similarly assails the press — which he calls the “enemy of the people” — it’s unsurprising we seem to be seeing it more often.

King, an anchor for “CBS This Morning,” interviewed Lisa Leslie, a former pro basketball player, just over a week after the helicopter crash that killed Leslie’s friend, retired L.A. Laker Bryant, and eight others. During the interview, King asked Leslie if the rape allegation, made 16½ years earlier, had tarnished the superstar’s legacy. Bryant had claimed the encounter was consensual, and prosecutors dropped the sexual assault charge after the accuser refused to testify.

Snoop Dogg, and many other Bryant fans, believed King’s questions were disrespectful, particularly coming as the nation still struggled to make sense of the devastating tragedy. Many vented on social media. The rapper went beyond airing his dis 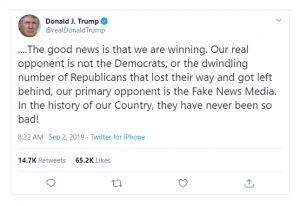 pleasure with the interview and attacked King.

“Respect the family and back off, bitch, before we come get you,” he said in an Instagram video filled with other vile comments.

Journalists work on behalf of the public and generally do not ask interview questions solely out of personal interest. It’s their job to ask relevant questions of public figures, even if interviewees find the queries embarrassing, uncomfortable or insensitive.

That’s not to say reporters don’t sometimes go too far. They do. But no one has the right to attack, intimidate or threaten journalists for doing their job.

Trump began his relentless attacks on the press before taking office, an apparent attempt to discredit an institution that had begun covering him aggressively. He repurposed the term “fake news” as a label for unflattering stories, despite the truthfulness of the reporting. He used the phrase in tweets 273 times in 2019 — 50 percent more than in the previous year, the New York Times reported in a story about the president’ 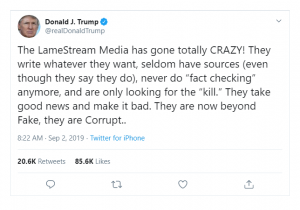 s attacks on the news media. He referred to the press as the “enemy of the people” in 21 tweets, five more than in 2018, according to the Times.

“Four American journalists were barred from covering the president’s dinner with the North Korean leader, Kim Jong-un,” the Times reported. “The administration argued in court that it had the right to ban a reporter from the White House. The daily White House briefing ceased to exist. And a new press secretary rarely spoke in public outside Fox News.”

Politicians in the U.S. and abroad mimicked Trump’s assaults, making journalism a more dangerous profession. Reporters Without Borders, which advocates for press freedom across the globe, warned in a report last spring that the attacks had created a hostile climate for reporters.

“The hostility towards journalists expressed by political leaders in many countries has incited increasingly serious and frequent acts of violence that have fueled an unprecedented level of fear and danger for journalists,” the report found.

The work of journalists is important, particularly in democratic societies. When done fairly and accurately, it provides valuable information about our communities and those entrusted to lead it.

I was encouraged to hear John Kelly, Trump’s fired Chief of Staff, recently stand up for the free press, even if he seemed more aligned with his boss during his time in the White House. He even went as far to say, “if you only watch Fox News because it’s reinforcing what you believe, you are not an informed citizen.”

“The media, in my view, and I feel very strongly about this, is not the enemy of the people,” Kelly said. “We need a free media.”

Previous story
Bookshelf: “Author in Chief: The Untold Story of our Presidents and the Books They Wrote”
Next story
Excerpt: Tips on organizing notes from “The Craft of Science Writing”