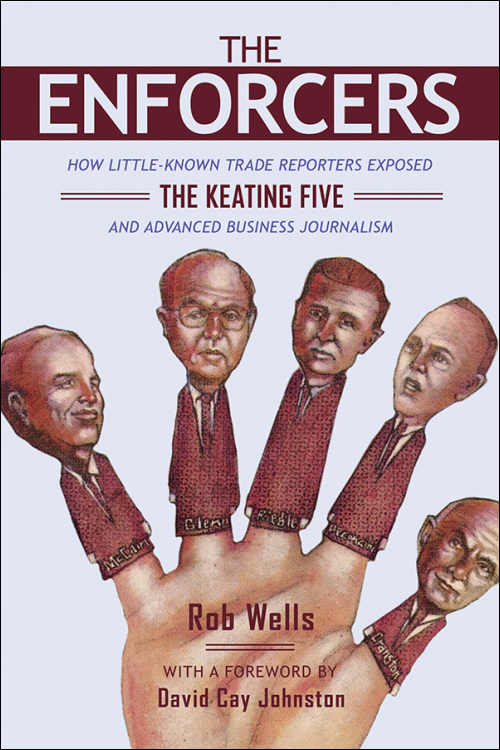 In late 1989, front pages and evening newscasts were dominated for weeks by stories about the national savings and loan crisis that saw more than 1,000 thrift institutions fail. Drawing particular interest from the media was a high-powered businessman named Charles Keating Jr., whose backroom wrangling with five U.S. senators made him the poster child for self-dealing S&L leaders.

But here’s the thing: The big-name newspapers and high-profile broadcasts that were “breaking” the Keating story to millions of 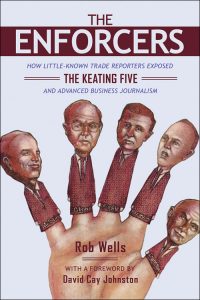 Americans were actually playing catch-up to a feisty little trade publication. The 10,000 weekly subscribers to the National Thrift News, which covers the savings and loan industry, read about the Keating story two years before it made national headlines.

In his book “The Enforcers: How Little-known Trade Reporters Exposed the Keating Five and Advanced Business Journalism” (University of Illinois Press), Rob Wells highlights the National Thrift News and its breaking of the story of Charles Keating and his bank failure that cost taxpayers $3.5 billion. But “The Enforcers” is more than a history lesson. Lauding the weekly’s investigative journalism and a scrappy editor named Stan Strachan, Wells uses the National Thrift News tale to argue for a new era in journalism, one in which the “big-brand news media” collaborates with smaller, spunkier outlets like National Thrift News for the good of the profession and the news-consuming public.

We recently talked with Wells – an assistant professor of journalism and strategic media at the University of Arkansas and former Wall Street Journal, Bloomberg News and AP journalist – about his views on the state of journalism and the changes he would like to see.

In your book, you refer a lot to accountability journalism. How do you define that?

It’s a close cousin to investigative journalism, and it’s the type of journalism that is aimed at holding powerful institutions or public figures to account for their actions. An example would be the John Carreyrou book on Theranos, “Bad Blood,” and his reporting about Elizabeth Holmes and her abuse of power in the corporate space, lying to shareholders and investors about technology, and putting the public at some risk with the idea of having a false blood test.

It sounds a little like a version of the old, “Comfort the afflicted and afflict the comfortable.”

I think it’s really just a modern spin on that. It stems back to one of the foundational normative practices of journalism: to serve the public interest and hold political and public figures to account.

Your book makes a strong case for the high-quality journalism practiced at trade journals.

High-quality trade press will tell very candid stories about what’s going on in their industries, because that is the value that people find in those publications. They find that value by knowing who the bad actors are. And that goes to the whole point of these trade publications serving as a conscience of the industry, as enforcers of a type of ethics, business ethics. I want to try to sharpen the idea that high-quality trade publications, not all of them, but ones like the National Thrift News and Tax Notes and Women’s Wear Daily, Computer World, and Aviation Week and Space Technology, these publications write really aggressive stories about people in their industries … fair, well-reported, strong stories about bad actors, and people find that to be valuable.

The excellence of some of these publications really speaks for themselves. I had a friend of mine at the AP who came from Telecommunications Week I think it was, and she was really fully invested in Washington politics and policy. She came on to cover technology in the ’90s, and ended up being the Federal Reserve reporter for the AP during the 2000 financial crisis. Just an outstanding reporter who came from the trades. The current economics editor of The Washington Post is Damian Paletta. We hired him at Dow Jones from American Banker. The training that you get in a quality trade press newsroom is excellent. What I’m arguing is, I think we ought to look at having some sort of cross-pollination between the legacy outlets that have the brand names and the distribution infrastructure and these niche publications that have expertise. Marry those two together and we have a way to leverage journalistic power to really bring some good scrutiny and consistent reporting on the business sector.

How do you get young journalists interested in learning about the business sector?

It’s a hard sell, but what I do is go into basic reporting classes, and I say, “How many of you want to be a political reporter?” And some of them will raise their hands. “Well, if you want to report in the big leagues, you’re going to have to know how to follow the money. This is what my class teaches you. How many of you want to cover sports?” Most of the hands go up. “OK, well, are you going to cover contract negotiations without a business background? Give me a break … How about licensing rights? Do you know what a labor contract is?” So, I make that pitch. Same with entertainment. “You want to cover the entertainment industry? Try covering Disney. It’s a multinational company that’s doing things that are not aligned with producing quality entertainment all the time. It’s shareholder-driven.” I try to break it down like that.

What are some of the lesson that you think journalists need to learn, but also, to take it even broader, what do we need to learn from this story to be good citizens?

I think for citizens, it’s to realize that as journalism restructures and big newsrooms downsize, there is some really high-quality journalism happening in unexpected places. It could be through the trade press or through some of these digital start-up publications, ProPublica and so forth, that have professional journalists running them, they abide by the SPJ Code of Ethics, and they are every bit as trained and sophisticated … Just because it doesn’t say The New York Times, it  doesn’t mean it’s not producing valuable journalism. You can find high-quality journalism in these small newsrooms that adhere to this professional culture.

I think what it says about journalism is, I hope this is a wake-up call about the arrogance of institutional media mistreating and ignoring the trade press and dismissing its work. It’s something I’ve seen a lot, especially in legacy newspapers, big metro papers, is they kind of want to go do their own thing, and they don’t want to partner with a digital start-up … and they are suffering because of it. Because they’re not innovating. And this could help us all better understand what’s happening in our economy and our business sector, which affect us in so many different ways. I hope it will open some eyes in larger newsrooms about the opportunities to work together with smaller players for the public interest.

Previous story
Excerpt: Tips on organizing notes from “The Craft of Science Writing”
Next story
Hicks: During crises, public needs trust in government and the press