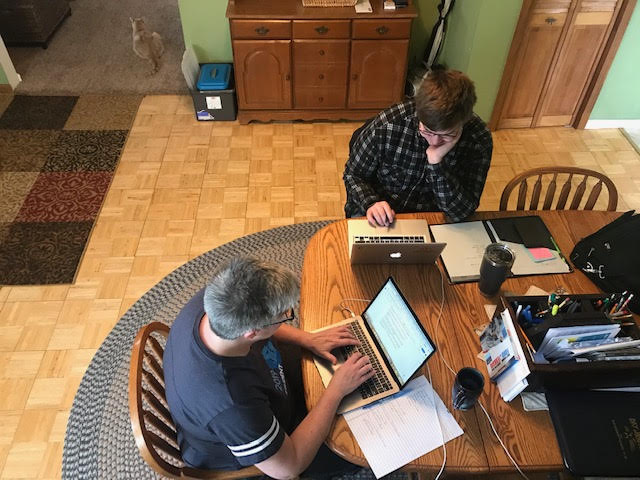 He was about to begin dress rehearsals for the school play. 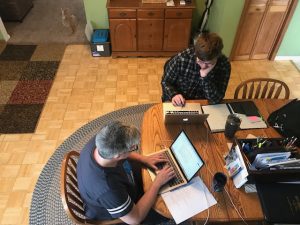 Sam Shelenberger, a senior at Saegertown High School in Saegertown, Pennsylvania, had scheduled a week off of work at a local gas station to prepare for his role in “Matilda,” a play about a precocious five-year-old girl. Then on March 12 Shelenberger, who also is the editor in chief of Saegertown High’s Panther Press, got the word: Schools throughout Pennsylvania were shutting down. The gut-punch realization soon set in: His senior year was over.

He contacted his media adviser Stacey Hetrick and visited her house that night to come up with a plan. “Their initial thinking was, ‘Let’s get everything online that we know right now,’” Hetrick said.

The students at the newspaper and website started a Slack channel and created a document of guidelines for the rest of the 25-person staff (grades 9-12). They plowed forward with a robust Instagram presence, as well as “Saegertown Shutdown” stories and photos from the community. The goal is to post one every day during the Coronavirus pandemic, in addition to regular coverage.

The next morning, alumni of The Panther Press – forced home from college closures – gathered on Hetrick’s porch (practicing social distancing) to see how they could help.

About 30 percent of the residents of Saegertown — a rural community of about 1,000 — don’t have home internet access. The primary local industry is tool and dye, so many businesses remain open making medical equipment. There are stories to be told.

The staff released a print issue of The Panther Press “even though we haven’t been in school all week,” Shelenberger said. He has a stockpile of evergreen stories in a Google Drive folder in case things get dire.

“It’s really been interesting to say the least,” Shelenberger said. “I didn’t think when I started journalism three years ago that I would be stuck at home from school writing about history we will be talking about when I grow up. I never expected that I would be writing the first draft of history.”

They speak for their generation

Currently many high school teachers across the country are not allowed to make assignments or require students to do work for a grade, yet student media staff continue to put out a product. Media advisers often have to request permission (and sometimes sneak into) schools to grab cameras, iPads and other equipment students might need.

Staffs mimic professional newsrooms. Those who covered beats like sports, for example, jump into special COVID-19 coverage. They do it all while schools are closed, on a volunteer basis. They speak for their generation. For example, at Saegertown a story on how COVID-19 affects students enlisted in the military was posted this week.

“They are reaching out to each other and saying, ‘What we’re doing here is important. Get on board.’” Hetrick said.

Leslie Dennis, Director of the Southern Interscholastic Press Association, which serves schools in 15 states, has been impressed with the “wealth and depth of coverage” student journalists have shown during the pandemic.

“Student journalists have not stopped as their classrooms have been shuttered and continue to cover how COVID-19 is affecting their community and peers from a variety of angles,” Dennis said. “The storytelling they are doing right now illustrates the importance of journalism in secondary education.”

It’s helpful, students said, that they are already connected hourly by technology, so that if a source is needed, a connection is not much further than a quick check on Instagram or Twitter. 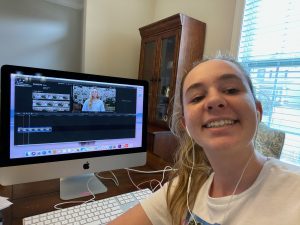 Karin McKemey, adviser at Catawba Ridge High School, oversees the student-run Catawba Ridge News and CRN-TV newsroom in Fort Mill, South Carolina Her staff puts out a daily broadcast despite not being together in school. She sees the dichotomy of technology and in-person interaction and how that helps her staff get out the news.

“They sit close together on a couch – maybe three or four of them – texting, but they’re all together,” McKemey said, thinking back to more normal daily operations. “They’re more well equipped to handle this but they do realize they miss the social interaction of being near people. They are getting creative with how to do interviews. I mean, how many stories can you really do from your family room?”

Her staff of eight students posts every day despite the fact that there are no seniors to lead the way in school, which only opened in fall. They have held Virtual Spirit Week and are debunking myths propelled into social media by teens, such as “if you gargle with vinegar and hot water it won’t be in your system,” McKemey said.

She always tells students “You are not the story.”

“But now I’m going back on my word,” she said. “They are the story. This is a chance to really document history.”

Sometimes that has challenges.

“None of these kids have taken television [class] before,” she said, and added that not all of her students have access to equipment.

At CRN-TV students send encouraging messages to one another over the news channel’s YouTube channel called “Friday Feels,” positive messages that keep up student body morale.

Although her students, like many others across the country, have not covered all curriculum material, COVID-19 coverage allows students on-the-job training.

“Even though they use their phones every day they are used to better quality with depth of field in cameras,” she said. “Instead of nonlinear editing they really have to start thinking in a linear way so they can capture to edit.”

Paige Bell, 17, a reporter with CRN-TV, said her classes dismissed March 15 but learning continues at home with online instruction. Bell, who said she was “raised old school in West Virginia, where you don’t have your phone at the table and you go outside to play,” values face-to-face interviews and has found it difficult to give that up.

“Definitely the hardest part has been trying to get an interview, but if you really want the interview you’ll do whatever you can to make it work,” Bell said. “Even though I’m as involved in media as I am as a student journalist, I’m just not crazy about my phone. With my interview process, I’m like, ‘Can you please just meet me out, anywhere, even in the middle of the road?’ It’s definitely been really frustrating for me.”

CRN-TV, like other student media, hopes to instill a sense of normalcy for students with features like Copperhead Challenge, where students take videos of what they are doing in their free time and challenge two or three people to do the same.The Morning Daily helps students keep routine in their mornings and “lets them see how they are affected directly, locally, instead of watching national news,” Bell said.

Sometimes it affects reporters directly, not just their readers and viewers. High school reporters get early practice at checking emotions at the door while getting the story.

“Sometimes whenever I get really thinking about it I think, holy crap this is my senior year and this is happening,” Shelenberger said. “That aspect has been kind of taxing – to think that my senior year has gone a different way than I thought it would.”

Bell echoed that sentiment and reflected on other national tragedies, such as school shootings.

“With those we kind of move on with our day and shove it under the rug,” she said. “But with Coronavirus, it’s just so in your face all the time.”

Across the country in California Justin Raisner, media adviser for the newsmagazine Highlander and the Scot Scoop website, saw his students launch features such as “Bored and Quarantined” after school closed March 16. The site is updated daily with help from 20 students on the COVID-19 coverage team at a school with 2,200 students.

“As the world is falling apart around you, to see a group of students come together to work together to create something and do such amazing work is the one thing that gives you hope,” Raisner said, by phone from his home.

Audrey Boyce, a junior, is the editor in charge of the Scot Scoop News COVID-19 section and said the online product drives to help people stay informed and calm anxiety.

“The most fun part about it is definitely that I really like serving the community in this way,” Boyce said. “The student response has been pretty awesome.”

Her staff sent out a form to students asking what questions they had about COVID-19 so the school media could answer them with expert commentary.

“I think not being at school is difficult because we like to do a lot of meetings with everyone to check in,” Boyce said. “Keeping in contact with everyone has been probably the most difficult part. Zoom calls are good, but 15 people not everybody gets to share those ideas as they would in person.

Scot Scoop Editor-in-chief Veronica Roseborough said social media has been a helpful tool to ask students what concerns they might have so that the staff could cover those angles and the “yearning for knowledge.”

“I’m really proud the way our team pulled together to make this happen. We had to rearrange all of our deadlines to make this work. What really amazed me was everyone’s dedication to it. Everyone is so enthusiastic about learning about it. Most of us are 16 or 17 and we haven’t gone through something like this that affected us so greatly.”

“We’re kind of known as the generation that is consumed by our phones,” Roseborough said. “I think we’ve kind of come to realize that we need that social interaction … to maintain that connection with people.”

Erinn Harris, adviser at Thomas Jefferson HS for Science and Technology in Alexandria Virginia, advises TJ Today online as well as broadcast and yearbook staff. The print magazine will go online this month because “There’s no point in printing a March issue,” she said, since the last day was March 12. Her new normal is waking each morning to take her temperature to make sure she doesn’t have a fever. Then she checks her phone to see what students have posted.

“They are doing without any sort of external motivation,” Harris. “They are just doing it because they love their jobs. If I wanted to find joy in all of this, my biggest joy is watching them do without being asked to do. The biggest accomplishment and bright spot that I’m getting out of all of this is that they are really taking the lead.”

Harris thinks pushing forward with coverage has another, added benefit in addition to serving the community.

“One of the things is motivating them is the distraction, “ Harris said. “If they are proofing pages or designing spreads they can’t really think about the world.”

Back in Pennsylvania, Shelenberger is thinking about the world and how he will tackle the next task as editor. As he wraps up this interview, the professional journalist in him kicks in. One more thing he really wants people to know about his staff, covering the Coronavirus pandemic:

Check out the work of these student journalists at the links below.

Meredith Cummings is a Tuscaloosa, Alabama-based freelance journalist who is also an instructor in the Department of Journalism and Creative Media at The University of Alabama. She is former president of the Alabama Pro SPJ chapter. Find her @merecummings on social media.