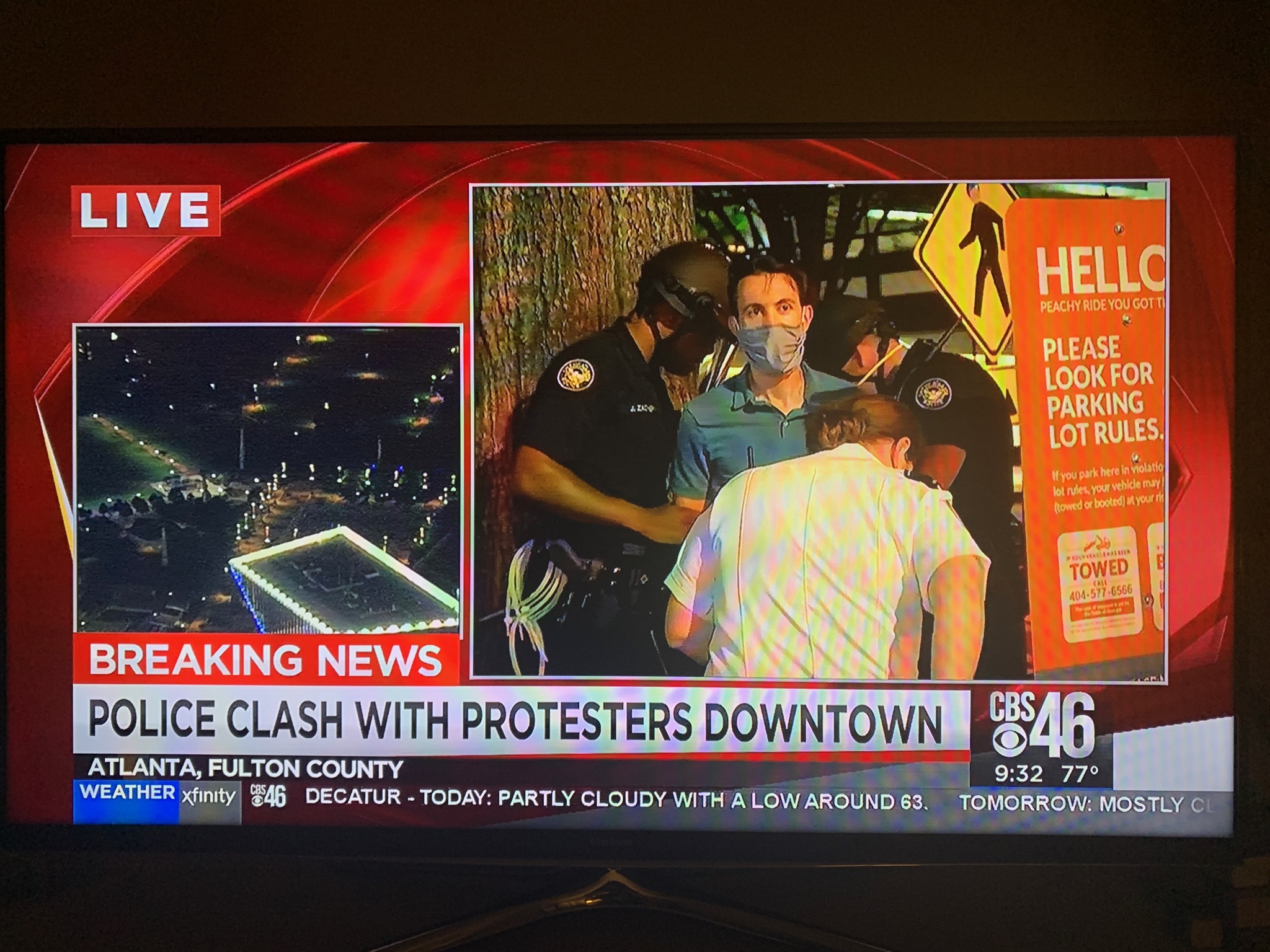 Police and protesters: Please let journalists do their jobs

That is, until I noticed a swarm of police officers heading my way and yelling.

A woman who appeared to be leading the group demanded a press pass, and I told her I had one from the Post on my phone. She said that didn’t count, only a paper credential was valid. I attempted to show the document anyway, which included the newspaper’s logo, a letter stating I was on assignment and the cell phone number of the editor I was working with.

Instead, my phone was taken from my hand, as was the pen I was holding, and I suddenly found myself being handcuffed and searched for weapons.

Doing my best to stay calm, I explained that I was a freelancer, that I live in Georgia rather than Washington and therefore held no physical badge from the Post. I told her she could call the number if the credential wasn’t enough.

Along with the pen, there was a reporter’s notebook in my back pocket. Atlanta was quiet by that point and protesters long gone. What reason did I have to lie?

Instead, my understanding at that point was I was being arrested and taken to jail, who knows for how long and under what circumstances.

The turning point apparently came while my pockets were being emptied. The officer searching me pulled out my wallet and I told him it contained business cards. The thought hadn’t occurred to me in the rush of detainment, and I’m not sure it would have made a difference. They had insisted digital credentials weren’t valid because they could be made up.

My business cards were made up, by me, on Vistaprint. 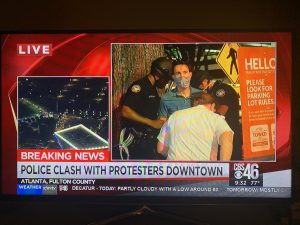 Journalist Haisten Willis is detained by Police in Atlanta

Nonetheless, the tension seemed to drop from there. I told the officers they were welcome to visit my website, which is listed on the card. Whether they did or not isn’t clear, but after another five minutes or so the cuffs were removed and I was free to go. Later, I learned the incident was broadcast live on CBS46.

What I’d love to write here is how tough I was in the face of detainment and handcuffs. The truth is, after a few minutes, shock and disbelief had me seeing stars and feeling like I would pass out. I asked to be seated, and mercifully my request was granted. With my identity verified, the police eventually offered me water and made sure to stay with me until they could be sure I was okay.

I was one of the lucky ones, detained for a few minutes by officers who by the end were rather polite. Many of my fellow journalists haven’t been so lucky. Dozens, in fact.

Where do we begin?

There was the wrongful arrest of a CNN news crew in Minneapolis. In the same city, photographer Linda Tirado said she was blinded in her left eye by a rubber bullet. There was the arrest of two photojournalists in Las Vegas. Police fired what appeared to be pepper balls at Louisville TV reporter Kaitlin Rust. Reporters were attacked or arrested in Denver, Phoenix, Philadelphia and Milwaukee, just to name a few.

It’s not just police either. Protesters attacked a photojournalist in Pittsburgh. A Fox News reporter was chased and harassed near the White House. Fayetteville Observer reporter Paul Woolverton was attacked capturing video at the looting of a J.C. Penney and later treated for a concussion.

I could go on, but the point should be clear. For Americans to know what is happening at protests across the country, they must have access to accurate information provided to them by journalists.

“The Post condemns all efforts to impede the work of journalists covering stories of public interest. That is especially true as journalists cover demonstrations such as those we’ve witnessed over the past week,” Washington Post Executive Editor Marty Baron said in response to my incident and to the others. “Journalists have been respectful of the role of police, and they’re owed respect for their role in providing information to the public. Any deliberate targeting of journalists for detention and arrest or, worse, violence is an intolerable and dangerous assault on freedom of the press.”

Some TV networks are now employing private security for their reporters. Not only should that be unnecessary, the vast majority of journalists don’t have the resources needed for such measures.

I spoke with another journalist, 29-year-old Chicago freelancer Jonathan Ballew, who spent five years in the Marine Corps and was pepper sprayed and tear gassed as part of his training. But he never expected to get sprayed covering protests for news outlets including Block Club Chicago and The Daily Beast.

Last Saturday Ballew reported from the front lines, credential around his neck, in a heated scene with cars burning and general chaos. Police were walking back a line of protesters with pepper spray, tear gas and rubber bullets, saying “back up, back up.” Ballew complied, walking backward while holding up his bright yellow pass, yelling “press” to identify himself and recording.

Nonetheless, an officer unloaded pepper spray directly into his face. Ballew managed to block most of it with his forearms, fighting through the pain and washing his eyes out with water. The spray on his arms was reactivated by the shower he took later on, keeping him up all night and burning for nearly 24 hours.

“It’s hard to believe somebody would not believe I was press if they looked at me,” Ballew said. “I’m screaming ‘press,’ I have a press badge and a reporter’s notebook. I had been up and down the front lines for hours. [The officer] did look at me, I saw him make eye contact. I can’t say with certainty he knew I was press. It sure felt like he knew.”

What really upset Ballew was a press conference the next day where city and state government leaders universally praised police efforts.

“This city has a long, troubled history with the police,” he said. “For the mayor and the Police Board president to say this has been a textbook and perfect use of force was disheartening.”

Ballew was interviewed by The New York Times about the encounter, but it didn’t make the final story. Apparently, they had too many others to choose from.

He said the incident made him even more eager to get out on the front lines and report. I’ve continued covering the protests too. But I fear journalists will become more timid in their reporting or simply refuse assignments if they fear arrest or chemical sprays. When that happens, it’s the public that loses.

As Ballew put it, it’s vital for journalists to be on the front lines so we can get an accurate and true portrayal of what happened.

Everyone knows the First Amendment to the United States Constitution guarantees freedom of speech. What some do not know is that it specifically mentions the press as a protected entity under this freedom. The founding fathers thought it so important they called out, by name, freedom of the press as a guaranteed right in the U.S. Presumably they also knew the press would find itself under attack from time to time.

The Bill of Rights was ratified on Christmas Day 1791, making it older than Abraham Lincoln, older than the state of Minnesota and the cities of Atlanta, Minneapolis and Washington, D.C. Yet it’s more important than ever that its protections be honored in the age of Twitter and smartphones.

Prior to my detainment, I spoke with sign-waving protesters who passionately told me why they came out and why they’re fighting for equality. I felt the sting of tear gas. I saw police on the front lines preventing a repeat of the looting Atlanta saw last Friday, some kneeling with protesters.

Those observations and heartfelt quotes weren’t for me, they were for the public, for anyone in America who chooses to read in order to know what is happening in their country.

Please, police and protesters, let those voices be heard.

Let journalists do their job.

Haisten Willis is an Atlanta-based freelance journalist and a member of SPJ’s Freedom of Information committee.