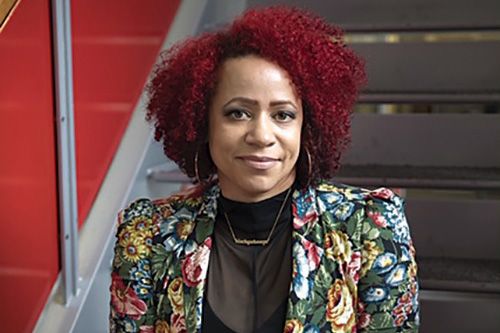 When The New York Times Magazine writer Nikole Hannah-Jones pitched the 1619 Project to her editors last year, she didn’t know that people would drive 60 miles to get their hands on the issue the day it dropped or that a few thousand more would line the streets outside the paper’s office nearly two weeks later to snag a copy. The  special issue marking the arrival of the first enslaved Africans in the United States 400 years ago has since won a Sidney Award for investigative reporting and a Pulitzer Prize for commentary.

In this interview, conducted in March, she shares where she first came across the 1619 date, her saddest and proudest moments while developing the project, and the one person sh most wishes would read it.

In a book a high-school black studies teacher gave me called “Before the Mayflower.” I’d never heard that people of African descent arrived here that early. It stuck out to me that not only was the date important, but there was a reason we’d never been taught about it.

2 Where did you even start?

When I pitched this project, I saw it as an opportunity to show that there is very little about modern American life that has been left untouched by the legacy of slavery, even though it operates invisibly. It was never my vision that this would be a history. I wanted to show the ongoing legacy in a way that underscored that we aren’t free of it.

3 How did the project evolve from your initial pitch?

My original idea was to dedicate an issue of the magazine to a series of essays tracing modern American life back to slavery. But then it grew to be much bigger. We compiled works of original poetry and short stories by some of the greatest black writers into a literary timeline, we commissioned original works of art, and then we turned the project into a podcast and a series of live events.

4 You’ve previously called the project a “love song to black people.” But is it also an education for white people?

Who the project was to and who it was for weren’t necessarily the same thing. The 1619 Project is for all Americans — anyone, whether they’re black, white, Latino, Native or Asian will better understand the country that we live in after reading it. But this is a project to black Americans, people who have been and who are still marginalized in American society, who are at the bottom of the caste system and whose contributions have been obscured. So it was important that the language and the storytelling be unflinching. It couldn’t hold back on how devastating and brutal this history was — it couldn’t be concerned with trying to save white Americans’ feelings.

5 At what point in the project were you saddest?

I was reading book after book after book about this history and understanding that there never really is triumph that lasts. The period after the Civil War is a particularly difficult time because the scene is hopeful during Reconstruction, when black people actually believe that they’re going to be treated as citizens. And then within 12 years, they’re forced back into quasi-slavery. I was looking at photos of lynchings, of soldiers being brutalized when they came home — it was unending misery.

6 What was your proudest moments?

The first time I saw the entire thing laid out — printed and pinned on the wall — I just started sobbing. I’d spent a lot of time worrying about doing justice to people who had been treated so poorly in this country that, while I didn’t think we’d created something perfect, I felt like we’d done it justice. And then the day the project came out in print — within an hour or two, I started seeing posts all over social media that people couldn’t find it, that people were driving 60 miles from store to store to store looking for it. In a country that has never wanted to deal with the history and legacy of slavery, and where black people still struggle to be represented accurately in the media, to have created something like that at the paper of record, and to have so many people wanting to own it, was an enormously proud moment.

7 Why do you think the project was so moving to people?

To have a project about one of the most fundamental but misunderstood aspects of American life led by a black woman, and written almost entirely by black people, in The New York Times was very powerful. And I think our decision to present the 400th anniversary not as a history, but to show in very shocking ways how this legacy is alive, was really damning. People told me again and again, “I had no idea; I’d never heard any of this.” I also think that if this project had come out under the Obama administration, there would’ve been a different reaction. When Obama was elected, there was a sense among white Americans that we were a post-racial society, and if the project had come out while he was in office, I think a lot of people would’ve asked, “Why are we dredging this up? We’ve moved past this.” But a lot of people were trying to understand how a country they thought they knew could produce both the first black president and Donald Trump — whom many Americans consider a racist and a white nationalist — back-to-back.

8 Did the feedback surprise you?

The day it published online, I sent out a Twitter thread about it that got 45,000 likes. That’s when I realized that this was going to be something that would do what I knew it had the power to do, but that I hadn’t known if it would do. And then the Sunday when it published in print, it just went crazy. It sold out everywhere. I’ve never received so much correspondence in my life. I was overwhelmed.

9 Does one response stand out?

There are two. One was when a 90-year-old black woman approached me, almost weeping, after a talk I gave in New Orleans. She thanked me for the project and told me she felt seen. It was surreal that a 90-year-old black woman in the Deep South who’d lived through racial terrorism and Jim Crow was thanking me for anything, because clearly the debt was owed in reverse. Then a friend texted me that Senator Chuck Schumer was talking about the project in front of Congress. He was talking about the story of my dad and his American flag, and [Schumer] started tearing up and could barely get the words out. I started crying because my dad died when he was 62, after working menial jobs almost his entire life, and he never would’ve thought that something that I wrote — or that anyone wrote — would mention his story in front of Congress.

10 If you could ensure one person read this project, who would it be?

If there were one person in Congress standing between H.R. 40 — the bill to study reparations— being passed or not, I would hope they would read it.

Previous story
Hicks: Safety and self-care vital for front-line journalists
Next story
From the President: Journalism, now more than ever