There have been equally big changes to the way on-air talent is vetted and hired.

“Prior to the pandemic, we advised our clients not to entertain a prospective offer if the employer was not willing to fly them out for a station visit,” said Jeff Marcu, CEO of the broadcast talent agency OTA Talent. “We rarely made exceptions.”

These days his company makes lots of exceptions, as does pretty much everyone else in the industry. They have to, since operations at a station could be deeply compromised by a visit from just one COVID-positive prospective hire. Given that new reality, Marcu says his agency now sees the benefits — or perhaps the unavoidability — of video-only hiring.

“I think virtual videoconference hiring could be here to stay for some positions,” he said. “Removing the station visit from the equation for some jobs eliminates some of the bureaucracy from the hiring process.”

A couple of things haven’t changed, however. Though stations across the country, slammed by precipitous declines in advertising revenue, have trimmed their staffs, the number of anchor-level jobs currently in play hasn’t declined much, if at all.

“I haven’t perceived that there’s a slowdown in hiring,” said Robert Feder, media columnist for Chicago’s Daily Herald. “COVID has presented a lot of new obstacles, but hiring continues.”

It helps that the pursuit of on-air talent was never all that hands-on, even in the pre-pandemic days. 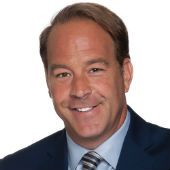 Ray Cortopassi was recently lured away from his Fox59 anchor job in Indianapolis by Chicago’s WGN.

Anchor veteran Ray Cortopassi, who recently closed out a two-decade stint in Indianapolis to take up the same duties at Chicago’s WGN, remembers that, back in the 1990s, job hunting consisted of scoping out an ad in a trade magazine, writing up a cover letter and resume, and dispatching them in a box containing a videotape highlight reel.

“You would take them to the post office and ship them off and hope you heard something back,” he said. “Now everything is done digitally and it’s so much easier. You send a link and there’s an instant impact.”

In the pre-pandemic days, being a native of the city in which you wanted to work was always an advantage. It meant you already knew the area and might more easily be accepted by viewers. These days it likely counts for even more because a newcomer won’t have to “learn” the market — a more difficult task with restaurants, bars and cultural venues on lockdown.

Indeed, it likely played a role in Cortopassi’s new gig, since he’s a Chicago native.

“That’s my unique advantage,” he said. “WGN puts a high premium on hiring team members that have a connection with the city.”

What they don’t have, apparently, is a requirement that potential hires be put through a bunch of videoconferences. Cortopassi says his vetting process was accomplished using phone calls, emails, and not a single Zoom session.

“It’s a little unique in these times that we still did it more or less the old-fashioned way,” he said.

Interestingly, Cortopassi has his job thanks to one of the biggest remote hiring efforts in the history of broadcast journalism. He was called to WGN to take over for Joe Donlon, who will co-anchor News Nation, a national news startup created by WGN’s owner, Nexstar. It debuts Sept. 1 on the WGN America cable network.

The company started staffing up the new enterprise just as the pandemic hit its stride last March.

“They had to switch to Zoom to hire everyone,” said Feder, who has reported extensively on News Nation. “It’s an amazing story, including how they gauged the chemistry among the anchors, who had never been in the same room together or interviewed in person. But they did it. They’re 100 percent staffed up, and it was all done over Zoom.”

Though that’s quite an achievement, it’s also not how the company (or any company, for that matter) would prefer to do it.

Given that fact, it’s reasonable to assume that not all the accommodations made by management for the remote reviewing of job applicants will outlast COVID-19. Just as local stations will likely do more in-person interviews when circumstances allow, they’ll also re-institute in-person meetings when it comes to high-profile, high-dollar hires.

Marcu reports that, even now, a certain percentage of potential employers continue to demand face-to-face contact.

“We still have a good percentage of clients who employers are flying out for station visits,” he said. “We are seeing that more with frontline anchor and weather positions, where co-anchor chemistry is important to test before both sides agree to move forward on a deal. We are also seeing employers flying out candidates for substantial six-figure salaries and correspondent positions.”

“As a tool for managers, videoconferencing is effective,” said Michael Depp, editor of TV News Check, a trade publication covering the broadcast industry. “But everybody misses the interactivity, because there are elements of a verbal transaction that just can’t happen unless you have that face-to-face meeting. As one Fox executive told me, ‘I can read a room, but I can’t read a Zoom.’”