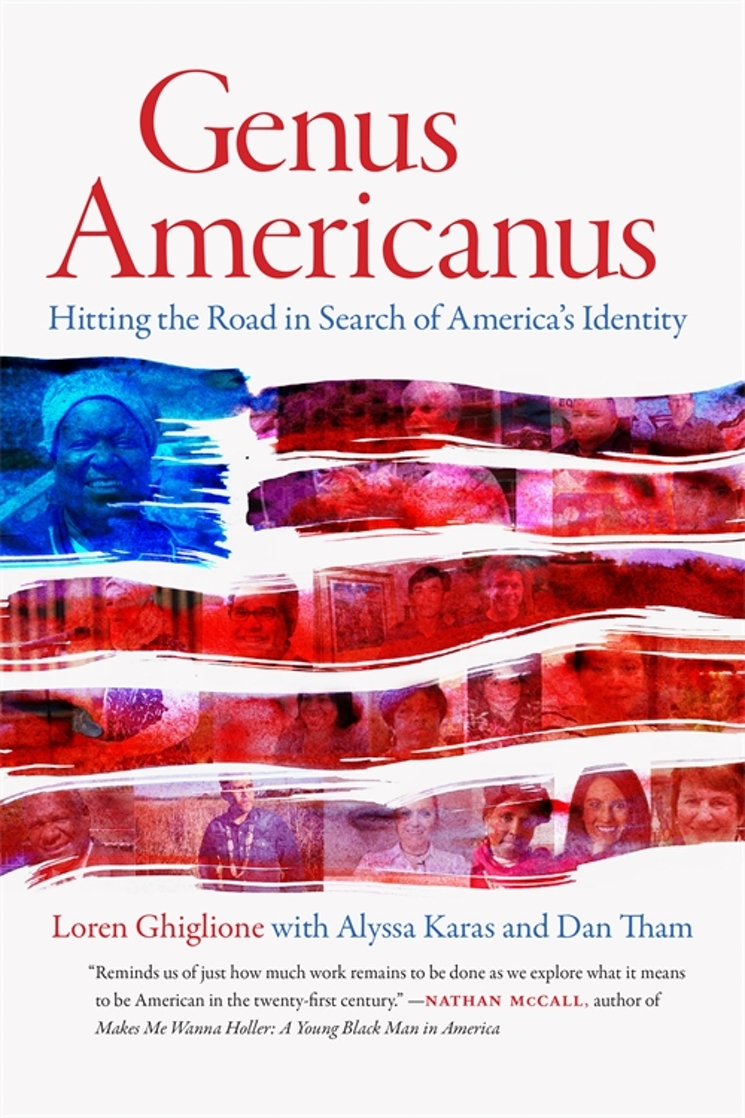 Loren Ghiglione, a lifelong devotee of Twain, who through his own work as a journalist, educator, and writer, has challenged the preconceptions of the system, looked to the legendary author for answers to the question: What makes up the American identity?

“I saw some parallels from his era in our era,” he explained, and so inspired by Twain’s “non-racist” views, and a desire to explore the nuances about race, gender, and class that make America so richly diverse, in 2011, he set out on a journey chronicled in his new book “Genus Americanus: Hitting the Road in Search of America’s Identity” (University of Georgia Press).

Leaving from Hannibal, MO, where Twain was raised and which he also used as the inspiration for the settings of his famed novels, Ghiglione, who taught journalism at Northwestern University, packed a minivan with laptops, books, cameras, and research material (“At least I left my bust of Twain behind,” he writes) and traced the steps of his hero. During the three-month-long journey across 28 states, he interviewed 150 Americans hoping to find answers to his question.

Unlike the men of Twain’s era, Ghiglione is fully aware of the way in which he’s perceived by minorities. “I am a white, able-bodied, straight, Christian, cisgender male,” he writes in the introduction, “however, I am not required to be a self-loathing, self-flagellating prisoner of my privilege,” he states. Which is why he brought two of his students along for the ride, twenty-somethings Alyssa Karas and Dan Tham, each of whom have identities defined by intersectionality.

Ghiglione, a self-declared optimist, not only allowed the enthusiasm of his companions to affect his own worldviews and challenge his notions but also made them co-authors of the book. “I think the millennials are doing things that maybe will bring change,” he explained. “I don’t think they’re more cynical, I think they’re more skeptical,” he added.

Throughout the book, Ghiglione’s elegant but approachable prose is interspersed with passages in which Karas and Tham observe the same places, the 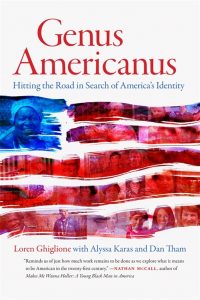 same people, through their own life experiences. Rather than becoming an account of the alleged breach in the generational gap, “Genus Americanus” reveals something profoundly moving: that Americans would realize they have much more in common with each other than they think.

The lack of conflict proved an anti-selling point when Ghiglione first pitched the book to publishers, who wanted to read about the divide, not unity. “We play different music on the radio,” said Ghiglione, so “we agreed that the person who was driving the car, got to choose the music.”

What’s most compelling about “Genus Americanus” is its generosity. Rather than romanticizing the “flyover states” or people who aren’t part of the “coastal elites,” as the media often does, the book dives deep into the complexities of its people.

In Boston, the trio meets with Gunner Scott, who talked to them about the treatment of transgender women of color in America. Karas pithily writes about the murder of Rita Hester, although she proceeds as a journalist her humanity shines when she writes about the way in which a woman’s voice chokes out reflecting the “pain of losing a loved one.”

“I see myself as a reporter,” explained Ghiglione, so one of his prompts to his fellow travelers was to approach the work not as “a philosopher or psychiatrist,” but as observers. When he was president of the American Society of Newspaper Editors, Ghiglione strived to nurture more diversity in newsrooms. His kindness towards his co-authors shows a man who walks the talk.

Although he’s not one for grandiose thesis and tying packages with perfect ribbons, Ghiglione came out of the trip with great appreciation of the changing landscape of journalism and how news are consumed.

“I don’t think you can tell people to change and then they will,” he said. But by identifying the disruptive force of the internet and what it’s done to newspapers, he saw that “change is happening whether you buy into it or not.”

Ghighlione turns 80 next year, but “Genus Americanus” reveals a man who is a constant student, someone who can never stop learning. We talked on the phone while he kept an eye on his five grandchildren who were in Zoom sessions in their respective school classes. But clearly there were six students in the house. As we wrapped up the conversation, the author spoke about his interest in what’s happening in small towns in Africa and Latin America.

He remembered a trip he took with students to South Africa when he taught at Emory University, and how his students were changed by what they saw there.

“Everything that they experienced, reminds me of James Baldwin talking about going to Paris,” he said, “going there allows you to understand America better because all these things are churning around in your head from travel.”

If the book doesn’t ultimately define what constitutes the American gene, it’s effective as a snapshot of a country too large to be contained by a frame. In quarantine, it’s also a perfect example of a genre that Twain mastered, the American road trip. The economic but poetic prose in the book allows readers to wander with the protagonists — and get lost with them as they look at their country with new eyes.

It’s easy to imagine a miniseries starring the three travelers. “The kids thought about that,” said Ghiglione. “Dan wanted Jennifer Lawrence to play Alyssa,” he added.

As for him, “something between Bill Murray and Clint Eastwood,” he laughed, “although [the latter’s] politics are terrible. It would probably be some curmudgeonly actor.”

Then with all respect, Mr. Ghiglione, you didn’t read the same compassionate book I did.