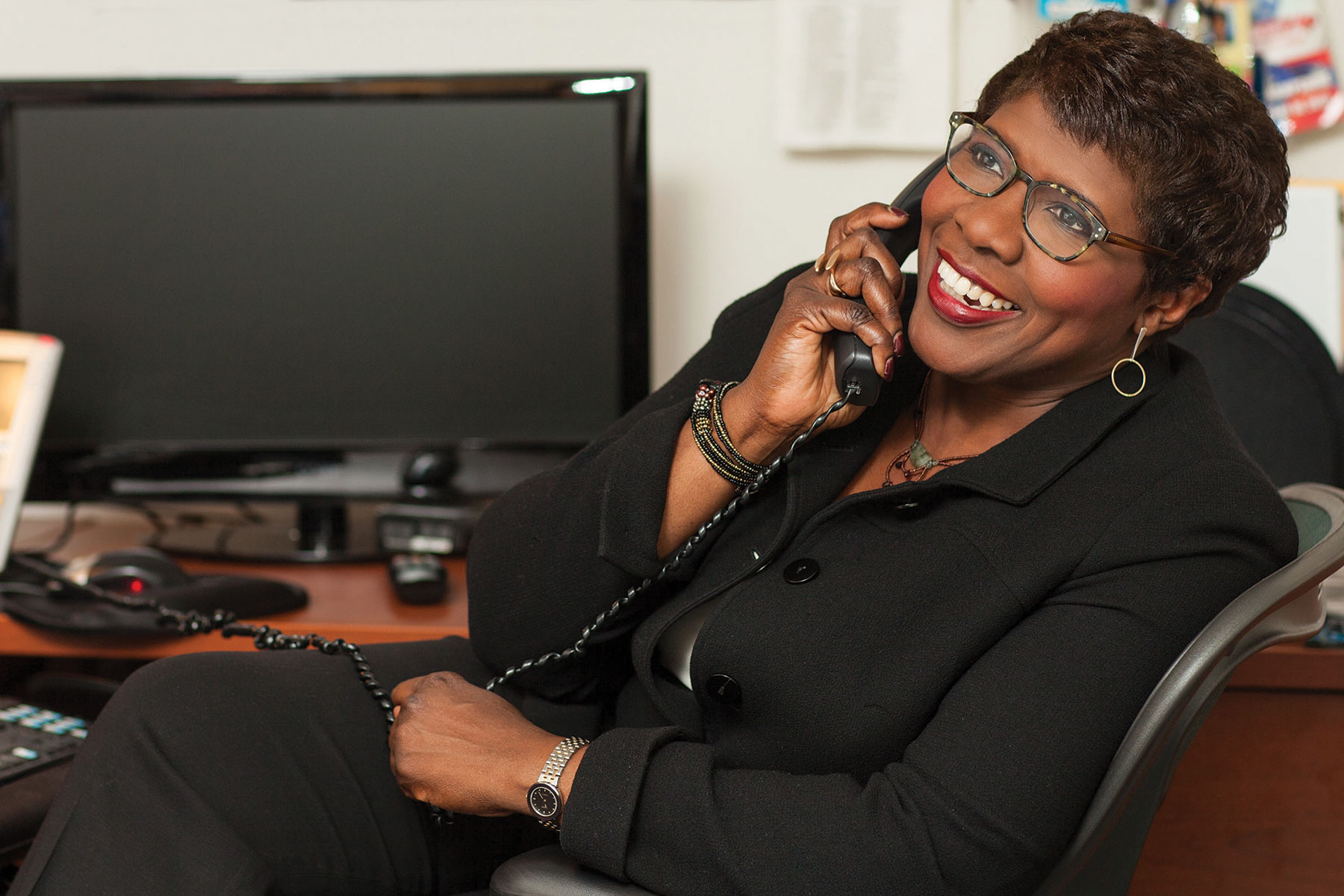 Gwen Ifill was a trailblazer and journalism icon with near-universal respect from peers for how she conducted her craft.

She began her career in newspapers and moved to television networks, serving as moderator and managing editor of PBS’s “Washington Week” and co-anchor and managing editor of “PBS NewsHour” at the time of her death in 2016. Her journalistic journey included stops at The Boston Herald American, The Evening Sun in Baltimore, The Washington Post, The New York Times and NBC News.

The Society of Professional Journalists has posthumously named Ifill a Fellow of the Society in recognition of her accomplished career, which included moderating presidential and vice-presidential debates and becoming one of the first African American women to preside over a network TV political analysis show.

Among her numerous other accolades, Ifill’s image gazes from a U.S. postage stamp alongside the hopeful word “Forever.”

We asked six people who knew her well to share what Ifill meant to them and others.

I knew I had found my best friend and fellow traveler in journalism when Gwen Ifill rushed up to me in The Washington Post newsroom before I stepped into an interview with then-Metro Editor Milton Coleman, grabbed my shoulders and told me to add $10,000 to whatever salary I had mind. Breathless from literally dashing across the newsroom, she said, “Just do it because it’s what the white boys do, and you happen to have the talent to back it up.”

I was stunned that she had taken notice of my work. Stunned that she trotted across a busy newsroom just to give me a dash of self-confidence. And stunned that she gave voice to an uncomfortable but rarely acknowledged salary disparity, delivering it as a fact instead of a complaint whispered in hushed tones.

It’s a classic Gwen Ifill story: tracking and spotting talent, lifting others up and putting a spotlight on the kinds of hard truths most people would prefer to avoid out of some combination of trepidation, confusion or ambition.

There is a long line of journalists who got into this business or stayed in because she put a proverbial hand on their shoulder, especially as the entire industry entered a period of technology-induced vertigo. More of us should take notice of that and put it into practice in our own newsrooms.

Gwen left us too soon, but her legacy is indelible, and her journalistic integrity burns bright like a guiding beacon in this moment of tumult.

JUDY WOODRUFF — Anchor and managing editor of the “PBS NewsHour”

“Fearless.” That’s the word I’d use to describe my dear friend, Gwen Ifill.

Something in her DNA gave her the confidence to look anyone in the face — no matter how powerful — and ask questions that needed to be asked. She was insatiably curious and believed a journalist’s responsibility was to try to get honest answers and hold public officials accountable.

Gwen had an incandescent quality about her, the ability to flash the smile that lit up a room, trade insider intel with colleagues about whatever story they were covering, express strong views about who’d be the right guest to discuss taxes on a particular night’s “NewsHour” and, most impressively, locate the best barbecue restaurant in any city.

She could manage all this and still be available to co-workers and friends with life advice and to younger journalists, for whom she was an exemplary model, with career advice. There are scores of young reporters working across the country that Gwen made time to talk to about their careers. She was committed to diversity, determined that the next generation of journalists of color not be the lonely one or two in the newsroom. She had vivid memories of her own experiences that she didn’t want to see repeated.

Gwen made everyone around her a better journalist and a better person, including me.

ROCHELLE RILEY — Director of Arts and Culture for the city of Detroit, former Detroit Free Press columnist, author of “The Burden: African Americans and the Enduring Impact of Slavery” and “That They Lived: African Americans Who Changed the World,” to be published in 2021.

It has been nearly four years, and I still pick up the phone to call her.

Such was the impact that Gwen Ifill had on my life, as a friend and journalist and example of good character, grace and spiritual stewardship. Her judgment and taste were impeccable, her advice unimpeachable.

She was the person I looked up to most in my career, and in my life. She was a role model who taught by example how to live, how to care about others and how to aspire to a necessary greatness that Black journalists had to achieve to keep our jobs. She was that for me — for hundreds of others personally and thousands more through her work.

She celebrated my successes, which would never rise to the level of hers, but which she treated with deference and equity and respect. And, as with every major step in my life, I still want her advice and consent or wisdom and warning.

She was never wrong.

She didn’t get to see me leave the newsroom, to stop writing consistent commentary, to begin a new career. She would have loved the pivot. She would have reminded me of what I know, that once a journalist, always a journalist and how those skills can make you great in oh-so many other places.

She was my best friend, the best person I called friend. I am a better person thanks to her, and every now and again, I still want to pick up the phone and tell her so.

It’s still hard to believe Gwen isn’t here, but then again, she is. Her influence and success as a mentor have meant many journalists are doing today what Gwen preached when it came to both practicing tough accountability journalism and expanding opportunities for folks to enter the field from any walk of life.

For me, Gwen was someone I admired from afar until I got the privilege to get to know her and learn from her when I joined NBC News. I spent a lot more time with her both on air and off, since she was easily one of Tim Russert’s favorite contributors.

When I made the jump from print to TV, moving from a small newsroom to a massive one, Gwen became an important person from whom I regularly sought advice, even though we never technically worked together. She had already successfully jumped from print to TV and was incredibly generous to me during my own times of uncertainty.

I won’t share everything she shared, but needless to say, she stiffened my backbone and set quite the example. I’m sorry she’s not here on the front lines with us now, but her influence is in the many of us still pursuing the truth.

Gwen and I became friends when she joined me as a reporter for The Washington Post in 1984. Over the years, our friendship grew into a sisterhood. Our passions for journalism were different. For the most part, she liked to cover people in power; I liked to cover people affected by policies set by those in power.

She was hardworking, talented and smart. She was curious and strongly believed in holding people in power accountable. She was quick to pick up on how social media was changing the way journalists do their jobs. She was on Twitter and was tweeting up until a couple of weeks before her death. She enjoyed meeting and talking to young journalists who sought her advice.

She also knew that as much as she loved her job, she had to take time for herself. She liked spending time with her family and friends. She and I frequently went to brunch on Sundays after attending Metropolitan A.M.E. church in Washington.

Oct. 3, 1999 was a memorable day for me. It was the day I met Gwen Ifill and the day we both started work at the “PBS NewsHour.” I came to look forward to the post-editorial meetings, presided over by Gwen in her office, that were funnier, dishier and more frank.

Gwen and I worked together for 14 years. She was tough, fair-minded, smart, proud and generous. In a business fi lled with no shortage of aspiration, ego, success and disappointment, she was a skilled poker player. You only found out what she really thought when she was good and ready to let you know.

She loved fiercely: her family, her friends, her godsons. She knew who to look out for in the cutthroat conjoined twin worlds of Washington politics and television. She was funny and ready to share a laugh with others. She maintained her composure and never wavered in the face of criticism and unjust questions of integrity that swirled around her as she published her book, “The Breakthrough: Politics and Race in the Age of Obama” — just as she prepared to moderate the vice-presidential candidate’s debate in 2008, featuring Obama’s VP pick.

Gwen had a career packed with achievement, and she rose to challenge after challenge. It was a gift to know her and to have her as a colleague and a tragedy that her clear, strong voice was stilled when so many great stories lay ahead to be told.

Tagged under: Fellows of the Society