It regularly takes a while — sometimes days, even — to get full results from an election. So we shouldn’t call the outcome and risk disenfranchising voters until we’re sure.

In the meantime, while we all patiently wait, try this week’s News Biz Quiz.

1. (ARCHIVE) The above famous (inaccurate, as it turned out) headline ran in what newspaper, which President-elect Harry Truman famously held up during a photo op upon being declared the actual winner of the 1948 election?

2. Though it hasn’t specified how it will do so, what e-mail marketing company says it will try to fight disinformation campaigns by shutting down the accounts of people it deems to be spreading content that’s “materially false, inaccurate, or misleading in a way that could deceive or confuse others about important events, topics, or circumstances”?

3. Sid Hartman, the sportswriter who helped bring Major League Baseball to what city through his work with the Star-Tribune newspaper and WCCO radio, passed away in October at age 100 — the same day one of his columns ran in the paper?

4. What founding editor of The Intercept, known for his previous reporting based on leaked information from Edward Snowden, has stepped down from that job after he claims he was “censored” by fellow editors who didn’t want to run a story about Joe Biden they claim was “teeming with distortions and inaccuracies”?

5. (ARCHIVE) This instrument, seen here as part of a memorial to him, was famously used by what journalist during televised coverage of the 2000 presidential election? 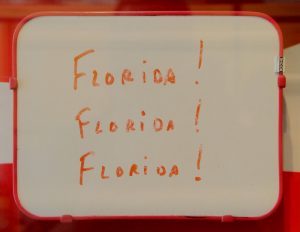 6. Which of these cable news networks was the only one to see a revenue increase during the spring and summer height of the COVID-19 pandemic, according to the Pew Research Center?

7. The Student Press Law Center, the Native American Journalists Association and the Foundation for Individual Rights in Education have all decried a memo sent by the president of Haskell Indian Nations University attempting to bar that school’s student newspaper editor, Jared Nally, from seeking public records about the death of a university employee. In what state is Haskell Indian Nations University?

Scroll down for answers.

Stan Jastrzebski has competed in trivia competitions in 14 states (and Washington, D.C.), including appearances on “Jeopardy!” and “Who Wants To Be A Millionaire?.”  He’s won more than 40 state, regional and national journalism awards and has spent more than a dozen years leading NPR member station newsrooms. He lives in Lafayette, IN with his wife and daughter.