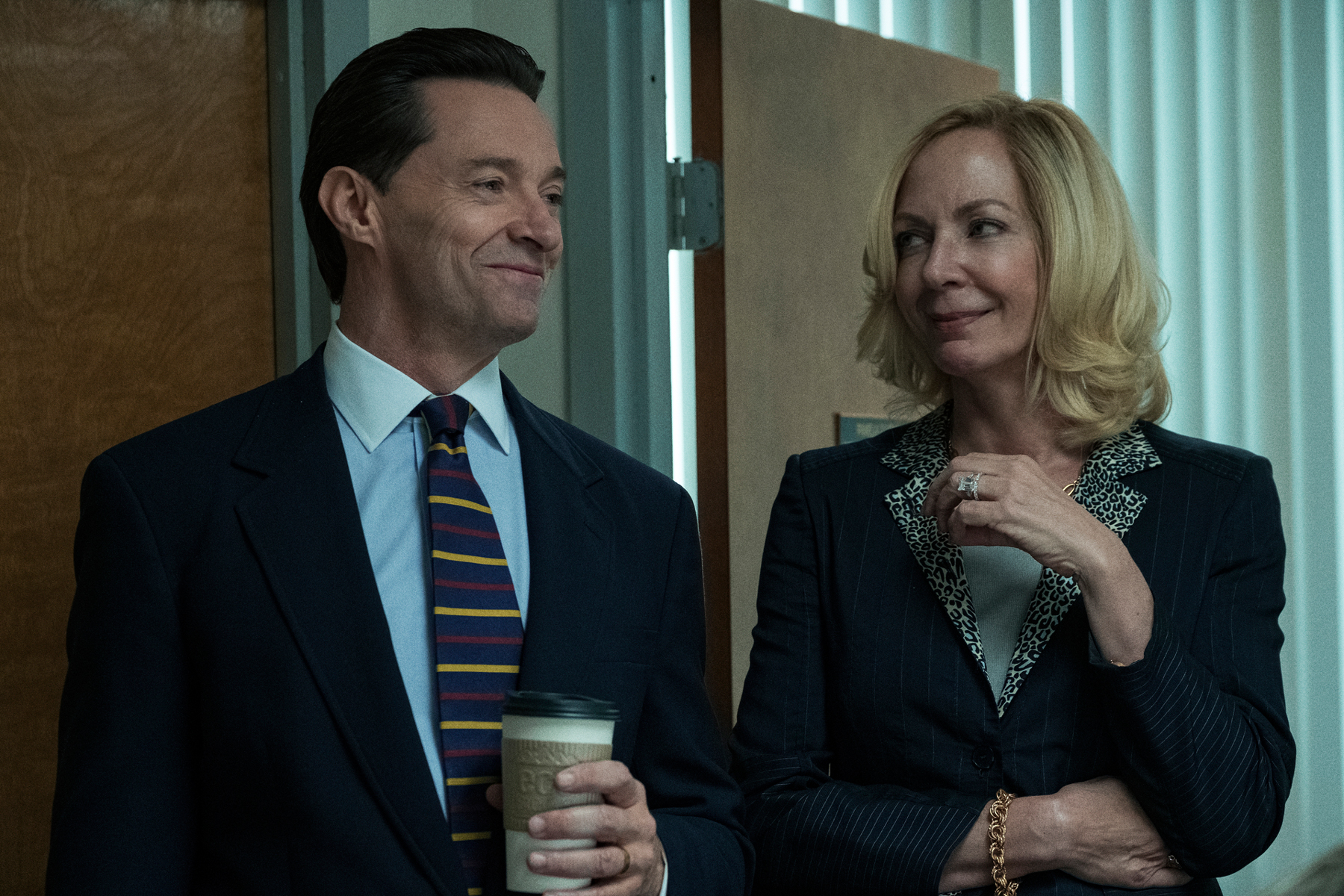 “Bad Education,” “The Photograph,” “Most Wanted” and more journalism movies

Need ideas for what to watch over the holiday breaks?

Here are a batch of recent films we’ve added to our almost-exhaustive, ranked list of 110+ Journalism Movies. To see where these are ranked and to view the entire list, click here.

Thanks to the continued efforts of the team from Midwest Film Journal for their contributions.

Bad Education (2020). At a time when bombshell stories drop daily — and the leaders, movers and shakers at their centers continuously, and miraculously, emerge unscathed — “Bad Education” arrived as a refreshing reminder of journalists’ ability to take down the corrupt. When Roslyn School District Superintendent Frank Tassone (Hugh Jackman) encourages a high-school newspaper reporter (Geraldine Viswanathan) to dig deeper into what she calls a “puff piece” on a school construction project, she uncovers the largest public-school embezzlement scandal in American history. Based on true events and written by former Roslyn middle-school student Mike Makowsky, “Bad Education” aches with authenticity. You can practically smell pencil shavings, feel the heat of fluorescent lights and smell the fear of school administrators come budget season. Rather than simply satirizing Frank as a slick swindler, Makowsky, Jackman and director Cory Finley capture the warm light of a lifelong educator that still flickers in his soul, however faintly. When news surfaces about Tassone’s malfeasance, though, you’ll breathe a sigh of relief at the sight of justice served through journalism. (SW) 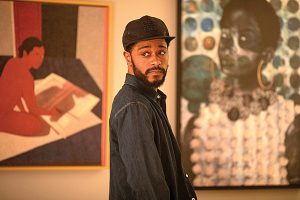 to interview residents about life after Hurricane Katrina. While there, he learns about a subject’s long-lost love and sets out to find her. Coincidentally, the lost love’s daughter, Mae (Issa Rae), is determined to learn about her late mother’s past, thanks to photographs left to her in a safety deposit box. Fate brings Michael and Mae together, beautiful people destined for a beautiful union. “The Photograph” is tasteful, sultry Valentine’s Day programming, set in a world where Michael’s work writing about random folks lands him the love of his life and a sweet new job in London. Saxophones and tinkling xylophones play when Michael and Mae make love for the first time; they reprise as Michael sits at his computer looking at a blank page, wondering how to describe it all for an audience of, surely, dozens. (ED) 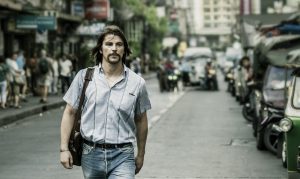 Most Wanted (2020). Writer-director Daniel Roby’s Canadian film occasionally resembles a scrappier, grimier, one-nation-north version of “The Insider.” Conveyed in a crosshatched, non-linear style, this true-life tale dramatizes the late-1980s Thailand arrest of Canadian citizen Alain Olivier (fictionalized as Daniel Léger and impressively played by Antoine Olivier Pilon as a troubled kid out of options and in too deep.) Josh Hartnett portrays Victor Malarek, the Globe and Mail reporter who untangled a plot involving overzealous and underhanded cops, as well as a small-time drug dealer (Jim Gaffigan, who brings palpable menace to cognitive-whiplash stunt casting). Roby tries to cram far too much into two hours, but Hartnett propels his portions with a puckish personality, and there are frank, funny and sometimes fraught exchanges with his editor (J.C. MacKenzie). Although it would benefit from a bigger canvas, “Most Wanted” remains a keen, timely treatise on systemic law-enforcement strong-arming tactics and the urgent need to expose them. (NR)

Still Here (2020). Even if you only interned in a newsroom, you’ll see how this well-meaning but woefully 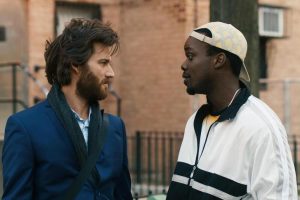 inept film gets the details so heinously wrong. Swaggering and smoldering Christian Baker (Johnny Whitworth) writes for the fictitious New York Chronicle and becomes personally invested in a story about a young Black girl’s disappearance. “I wanna know what’s really going on out there,” Baker gnashes before dropping cash to a source for intel. “Something I can sink my teeth into.” After a quick glance at Christian’s incendiary copy that calls out the cops, his editor yells: “F*ck it! Let’s run it!” Perhaps it’s fitting that Whitworth resembles a suaver cousin of “Parks & Recreation’s” Jean-Ralphio Saperstein. As journalism films go, this one’s definitely among the worrrrrrrst. (NR)

Run This Town (2019). “Run This Town” chronicles the final year of former Toronto Mayor Rob Ford’s time in office, back when a video of a politician smoking crack cocaine could still derail their career. Robyn Doolittle, the recent university grad who broke the story in real life, is replaced here by a fictional male reporter aimlessly floating about early adulthood — a questionable choice. Without knowing that background, though, “Run This Town” simply comes across like a minor-level attempt at the rhythms of Aaron Sorkin, filled with colorful conversations and walk-and-talk sequences that never feel like more than the sum of their parts. Worth it, though, for character actor Damian Lewis’s fat-suited performance as Ford, almost entirely unrecognizable under the sweat and latex. (ED)

Long Shot (2019). When Seth Rogen ping-pongs off a parked sedan to survive a several-story fall, it’s OK to fear that “Long Shot” is just Rogen’s asinine “Neighbors” with an I Voted sticker. But even with an abundance of bodily fluid gags, “Long Shot” matures into a meaningful political romance that’s worthy of mention beside “The American President.” (The script is from Dan Sterling and Liz Hannah, respective co-writers of listmates “The Interview” and “The Post.”) Rogen is a liberal-minded reporter who resigns on principle after a conservative-media monolith buys his independent newspaper and then begins writing speeches for Charlotte Field (Charlize Theron), a POTUS-hopeful Secretary of State on whom Fred harbored a teenage crush. “Long Shot” is foremost an inversion of “Pretty Woman” (soundtrack and all), but Sterling and Hannah infuse journalistic notions of personal integrity and, yes, ideological struggle into Fred and Charlotte’s romance. Fred helps Charlotte understand even the ugliest truths are worth telling. Charlotte helps Fred express himself more meaningfully by shedding his perpetual sarcasm. And the film’s astuteness about Charlotte’s uphill battle for hearts and minds as a woman in politics is less a woke-fiction badge of honor than a believable barometer of real-world pressure. Most of all, “Long Shot” is often laugh-aloud funny, from quick-punch jabs at misogynist morning-show banter to a sublime showcase for Theron during which Charlotte negotiates an international incident while tweaking out of her gourd. (NR)

Greed (2019). “Greed” starts off as a juicy eat-the-rich satire but ultimately dries up into unearned dramatic territory. Steve Coogan stars as retail tycoon Sir Richard “Greedy” McCreadie, a thinly veiled stand-in for British fashion mogul Philip Green, and David Mitchell is Nick Morris, the nebbish journalist/biographer following McCreadie around to ghost-write a flattering memoir. Set during an extravagant party much like Green’s real-life jamborees, the film flashes back to McCreadie’s past as a boarding school brat and traces his rise and fall in the fashion industry. Not until the third act does co-writer / director Michael Winterbottom really focus on the fact that McCreadie’s empire was built on the backs of Sri Lankan women working in sweatshops. The ending title cards aim to shock us with disturbing facts about the fashion industry and the socioeconomic disparity involved, but after 90-plus minutes of Coogan hamming it up for humor’s sake, this information feels like it belongs in a better film. Like Nick, “Greed” commits the journalistic sin of glossing over the victims of a charming devil. (SW) 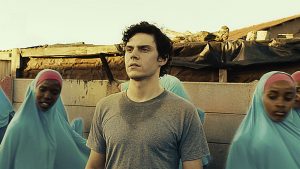 Bahadur’s 2011 book opens on audio of Mario Savio’s “bodies on the gears” speech. It’s ostensibly a mantra for a fictionalized Bahadur, given increasingly loud life by Evan Peters. But “Pirates” regards it like a dorm-room poster, a decoration to moon over for what you think it says about you and look straight past until it’s time to pack up for the summer. The many plights of Somalia — the “somewhere crazy” to which a desperate Bahadur flees after chucking the Canuck life — is similarly filtered through western-world whininess. Bahadur’s endless first-person monologues blame the fourth estate for burying his earliest stories. Those stories are all he has, but are they any good? Throw in romantic grace notes a la “(500) Days of Somalia,” Bahadur’s hypnotized animated visions of piracy set to the Notorious B.I.G.’s “Hypnotize” and spiral-cut ham interludes from Al Pacino as Bahadur’s mentor, and you’ve got just another flip, touristy and disengaged geopolitical drama — something like “Captain Phillips” made by Todd Phillips. (NR) 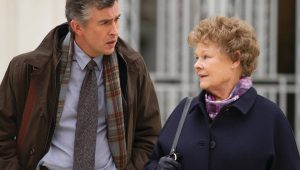 journalism can forge unlikely bonds and bring justice to decades-old sins. Based on a true story, the film follows former BBC journalist Martin Sixsmith (co-writer/producer Steve Coogan) and an elderly Irish woman named Philomena Lee (Judi Dench) as they search for the son who was taken from her when she was living at a convent 50 years prior. While its humor doesn’t always land smoothly, “Philomena” steadily stirs up suspense. Of course, the resolution of the real-life story is just a Google search away. But like an effective piece of journalism, the film still holds you in its grip. Director Stephen Frears draws great performances out of the two leads. Dench makes Philomena’s desperation our own while Coogan sheds light on how human-interest stories can linger in journalists’ hearts and minds long after they write them. (SW)

The Paperboy (2012). Matthew McConaughey stars in this vile piece of southern exploitation as Ward, a big-city journalist brought home to help exonerate a convicted felon, Van Wetter (John Cusack), at the behest of the murderer’s smitten girlfriend-via-correspondence, Charlotte (Nicole Kidman). There is a lot going on in “The Paperboy,” and although McConaughey plays a good investigative reporter, the rest of the film is buried under grim excess to a comical degree. Zac Efron co-stars as Jack, Ward’s brother, who is smitten with Charlotte — a problematic position to be in given her predicament. At one point, Charlotte has to drop trou to save Jack after a jellyfish attack and, well, that’s about the high point of the story. (ED)