Congress unanimously approved the Fallen Journalists Memorial Act (H.R. 3465), which allows construction of a monument “to commemorate America’s commitment to a free press as represented by journalists who sacrificed their lives in their line of work” as the House report on the bill explains it. 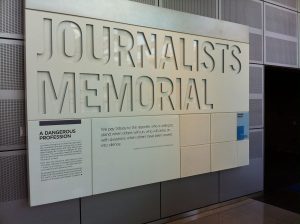 The Newseum in Washington, D.C., closed in 2019. It was home to a journalists’ memorial, which listed reporters, broadcasters and photographers who died reporting. Photo from Wikimedia Commons by Lenitha.

The Journalists Memorial at the now-shuttered Newseum listed 2,344 reporters, broadcasters and photographers who died reporting, including 159 Americans. The Committee to Protect Journalists counted 32 journalists killed worldwide in 2020.

Maryland Senator Ben Cardin (D) sponsored the legislation, which was largely inspired by the 2018 shooting at the Capital Gazette in Annapolis where five journalists lost their lives. The assassination of Washington Post columnist Jamal Khashoggi the same year also spurred support.

House sponsor Grace Napolitano (D-Calif.) explained in a prepared statement “even amid a global pandemic we see how journalists continue to provide an essential service to the public in fulfilling their duty to deliver the news. They put their lives on the line day in and day out to protect our democracy and a free and independent press, and fallen journalists are deserving of special tribute.”

The monument still must jump some major hurdles before becoming reality. The legislation requires it to be built with non-federal funds. The Annenberg and Ferro foundations donated $300,000 in seed money to start the Fallen Journalists Memorial Foundation, which will operate under the auspices of the National Press Club Journalism Institute.

The foundation needs to select an architect, come up with a design and raise money. It also needs to find a site: The memorial can go in or near Washington, D.C.’s tourist area but not in or adjacent to the National Mall which is already overcrowded with monuments.

“You cannot really know what the cost will be until you pick the site and design,” says Foundation President Barbara Cochran, who noted that other memorials have cost anywhere from $20 million to $50 million. “We hope to get support from journalists, of course, and media organizations but we think a lot of people will want to support” the project. The legislation gives the foundation seven years, but Congress has given extensions for other memorial projects.

The foundation hasn’t figured out how to choose an architect and may sponsor a competition, Cochran says.

The road isn’t always easy. A memorial to President John Adams and his family, authorized in 2001, has not been built. And construction of a memorial to Dwight D. Eisenhower got held up when his family objected to the design.

While the size hasn’t been determined, the foundation tentatively wants an acre. The plan calls for no names to be mentioned on the memorial. “We want this to be something lasting and will not need to be updated every year,” Cochran explains, noting that it will commemorate reporters, photographers, editors, producers, etc. “It won’t necessarily have a statue.” It may include engraved quotes about the importance of a free press.

Major journalism associations have supported it, including the News Media Association, National Newspaper Alliance, Society of Professional Journalists and CPJ.

Meanwhile, at least one famous correspondent killed in the line of duty got some federal recognition. In 2020, Congress approved naming a post office in Dana, Indiana, the Ernest ‘Ernie’ T. Pyle Post Office. The legendary World War II correspondent was killed by a Japanese bullet while traveling with the U.S. Army in the Pacific campaign in April 1945.