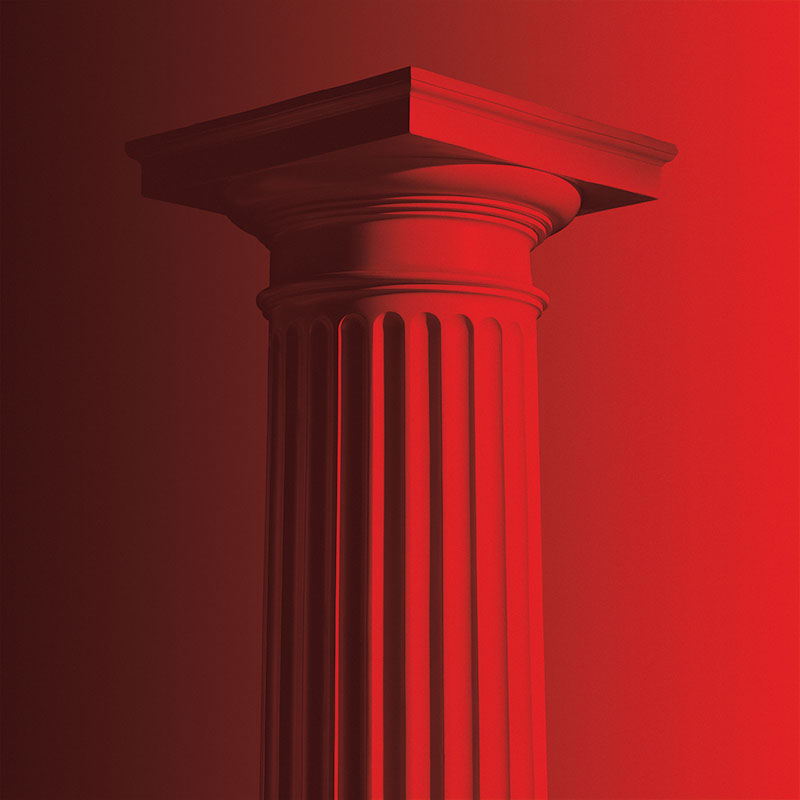 This feature celebrates one of SPJ’s four guiding principals: We are champions for journalists.

For nearly 90 years, the Society of Professional Journalists awards have honored journalists and outlets for their crucial contributions to the profession. The awards are designed to recognize the very best in professional journalism across print, radio, television, newsletters, art/graphics and online.

Each category is judged by a panel of veteran journalists, with just one winner selected. No ties or honorable mentions are awarded. The entries highlighted below each went above and beyond what is expected, with work that led to legislative action and state-level investigations, exposed the terrors of life for everyday people living through a political crisis, provided lifesaving data and challenged the press to become more transparent than ever. You may not know the names of these hardworking journalists. But we hope you’ll be inspired by their efforts, take their lessons into account, and maybe try for your own award during the next cycle.

Jose A. Del Real’s reporting for the series, “Brown Water for Brown People: California’s Overlooked Drinking Water Crisis,” started the same way a lot of brilliant reporting does: while he was working on something completely different. At the time, Del Real was a Los Angeles-based reporter for The New York Times, writing a series about life on the U.S.-Mexico border. The idea was to help Americans learn more about the often-discussed but little understood region. Del Real eventually became curious about the lives of farm workers, especially because he felt coverage of the issue often centered around farm owners rather than the people who were really growing the food.

What he learned was surprising, at least to him.

“I realized it would be valuable to make sure I was talking to farm workers and understanding what their lives were like,” said Del Real, who now works for The Washington Post. “People would mention offhand the problems with their drinking water. They’d say, ‘10% of our income goes to bottled water,’ because they can’t use the taps at home.”

The lack of safe drinking water was a daily fact of life for people in these communities, and yet Del Real had never heard of the issue. He figured if he didn’t know about it, many others didn’t either, which led him down a rabbit hole that culminated in the four-part series.

Del Real eventually found a treasure trove of public data and spoke with state employees and researchers at the University of California, Davis, which led him to visit other communities with drinking water issues. Once on the ground, he made sure to speak with people directly rather than going through advocates or intermediaries, and his ability to speak Spanish proved valuable, as well. Many of the people he talked to had never spoken with a journalist before.

“The first step for me is always knocking on doors,” he said.

There was a thick irony in that these places depended on sophisticated irrigation systems to grow America’s food while failing to provide safe drinking water for local residents.

When the series debuted, the impact was immediate. Within days there was movement in California’s state legislature toward fixing the problems. “The legislation had been in the works for a long time, yet had not been passed,” Del Real said. “That showed me that the series raised significant attention for this issue.”

In the same way, he was honored to win the New America Award since it brings further attention to these often-overlooked communities.

“To have the series recognized in this way is especially meaningful because it elevates the voices and community actors who are on the ground doing this work every day,” he said. “Awards elevate the story and signal the value of this type of work. That hopefully creates more of this type of work.”

Transparency is always important at PBS FRONTLINE. The show has for years released transcripts of interviews so viewers and sources can see the full context from which quotes originated. The show took that a step further with the Transparency Project, in which FRONTLINE developed interactive versions of its films, allowing the audience to see quotes in context and full interviews with various subjects.

“We see this as a public archive, a library of FRONTLINE’S content, but also a story generator,” said FRONTLINE Executive Producer Raney Aronson. “It’s an effort to say that as a news organization we welcome the debate around how we choose to tell an edited story. The heart of the matter is we’re trying to be transparent in order to build trust.”

The work was recognized for demonstrating the ideals outlined in the venerated SPJ Code of Ethics.

Aronson said sources in particular are huge fans of the initiative, as it removes concerns on their part that quotes will be taken out of context or used to make a point that wasn’t intended.

“When you do publish your underlying materials, it opens you up to questions and criticism,” Aronson said. “That’s what we want. We want this to be an open process as opposed to a behind-thescenes process.”

That doesn’t mean everything a source says goes unchecked. FRONTLINE fact-checks claims and even has lawyers go through to make sure comments are not libelous. Where changes are made for accuracy, it is noted for viewers to see.

“I’d like to believe that this could help [rebuild trust in journalism],” Aronson said. “It would be naive to think this was all that was needed to rebuild trust. So much has happened and there are big attacks from the right about the mainstream media. We need to do a lot more than transparency work, but I think it starts with transparency.”

When Casey Miller joined the Los Angeles Times in February 2019, she knew a core tenet of her job was to create a live California wildfires map. But she didn’t realize how urgent that need would become.

The effort began in earnest that summer and included speaking with reporters who covered the fires and with various agencies to track down data as her team began crafting the project.

In November, a fire broke out near Santa Clarita and, ready or not, it was time to take the map live. The continuously updated map includes information such as the most recent fire to start, where the state’s largest active fire is located at any given time, and how many acres that fire has burned. Readers can click on the locations of active fires to learn when they began and view an outline of the fire’s perimeter.

Feedback has been overwhelmingly positive, as people have used it to check on their houses and family members, some even using it to help plan potential evacuation routes. Readers have also sent a stream of suggestions for improvement, which Miller takes to heart.

“I’ve really found the reader feedback on this to be helpful and gratifying,” she said. “It’s been great to have the map live. Fire season was so huge this year, especially in the Bay area with their air quality issues.”

Knowing the map has proven to be a valuable resource for readers makes Miller proud, and she feels the award brings attention to that.

“We wanted to help people, and I feel like winning the award recognizes that we’ve created a helpful piece of journalism,” she said.

Aviva Okeson-Haberman was a senior at the University of Missouri when she took an investigative reporting class and needed a project to work on. Her classmate, Kyra Haas, came up with the idea of looking into the poor response people often received when trying to call the state’s adult abuse hotline. The pair issued open records requests and noticed the number of calls had steadily increased with no accompanying increase in staff. And unfortunately, seniors generally can be a population that goes unnoticed.

“The elder abuse hotline is not something that gets a ton of coverage,” said Okeson-Haberman, now a reporter with KCUR in Kansas City, Missouri. “We heard a common refrain from experts, which is how elder abuse is so far behind child abuse in terms of resources and attention. There just wasn’t a ton of reporting about it in Missouri.”

The pair doggedly pursued the topic, following up FOIA requests with phone calls and, eventually, a trip to a conference in St. Louis on the topic of senior financial exploitation. A participant at the conference brought up the hotline issue, and Okeson-Haberman and Haas knew they were onto something.

Officially, 99% of calls to the hotline were handled, but the investigation found that the true number was only about 50%.

Though the pair were just college students, their story led to the Missouri Attorney General launching an investigation into the hotline within hours of its publication. That investigation led to changes in how calls were handled, including the creation of an online reporting system, whereas only phone calls and faxes were allowed before.

“What I’m most proud of is the fact that changes were made because of the reporting,” Okeson-Haberman said. “That’s why I got into reporting, and that’s what I love about my job.”

Rodrigo Abd is a Lima, Peru-based photographer who has covered some of the most harrowing conflicts in recent history, including the Syrian civil war and the 2010 Haiti earthquake.

In 2019, he flew to Venezuela to cover the political crisis unfolding as Nicolás Maduro and Juan Guaidó struggled for control of the nation’s presidency. The struggle dragged on longer than expected, which presented an opportunity for deeper coverage. Reading a local newspaper one day, Abd learned of citizens starving as the conflict wrecked Venezuela’s economic infrastructure.

“It’s always good to show the daily suffering of people apart from press conferences or marches,” Abd said. “I wanted to document the daily lives of people and families. There’s a lack of food, a lack of medicines for people in hospitals. There are even difficulties burying relatives who die in Venezuela.”

His photos for “Venezuela on the Edge” include harrowing images of dead and dying people, many starving right in their homes. Some could only afford to eat once a day, and in one photo a man looks over the body of his deceased baby daughter for the last time before she is buried. 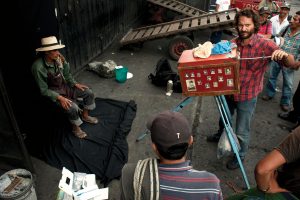 A worker, known in Guatemala as a “cargadore,” or “loader,” poses for a portrait in La Terminal market in Guatemala City in 2012. Photographer Rodrigo Abd took a series of “loaders” with a wooden camera that he bought while living in Afghanistan during a year assignment for The Associated Press. (Photo by Daniele Volpe)

Abd has covered political crises and their ramifications for years, so these types of scenes were not new to him. He feels these stories are crucially important to share with the world, and when he explains to subjects why he is interested in telling their stories, they often open up to him.

Abd said response to his work in Venezuela has been positive and that it helps people understand what’s happening beneath the big political struggles.

“In my career I always want to focus on people who suffer and are at the end of the line,” Abd said. “That’s what’s important about journalism: it helps people be more sensitive to what’s going on in these places.”

Haisten Willis is an Atlanta-based freelance journalist who contributes to The Washington Post, U.S. News & World Report and The Atlanta Journal-Constitution. He chairs the SPJ Freedom of Information committee and is a past president of SPJ Georgia.