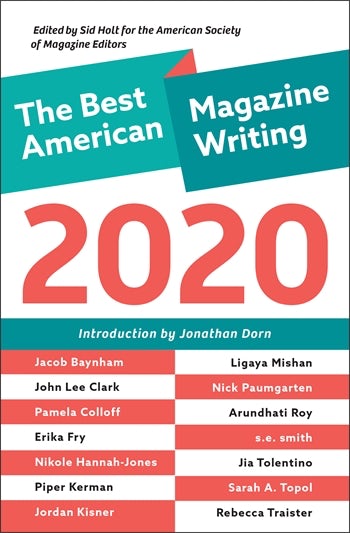 Sid Holt, executive director of the American Society of Magazine Editors, knows a thing or two about long-form journalism.

He started his career in 1984 at Rolling Stone, where he rose to managing editor within six years. His crowded resume also includes a stint as editorial director of Us Magazine; editor-in-chief and executive vice president of Adweek Magazines from 1998 to 2004; chief editor of Editor & Publisher; and editorial director of VNU Business Media, whose digital and print portfolio includes Billboard and the Hollywood Reporter.

In 2008 he was appointed chief executive of the American Society of Magazine Editors, which sponsors (along with the Columbia University School of Journalism) the National Magazine Awards. He also selects the stories included in the award program’s annual anthology, “The Best American Magazine Writing.” This year’s edition includes stories from usual suspects The New Yorker, Paris Review and The New York Times Magazine, but also from Catapult, Poetry and The Believer.

With a bit of breathing room between the 2020 and 2021 editions, Holt shares his views on everything from the future of the industry to what makes a good magazine tale.

How has the magazine industry changed since you began your career?

Obviously the biggest change has been the impact of the web on magazines. First, it’s changed the way magazine content is consumed. Secondly, it’s had a major impact on advertising support. There’s no doubt that that’s the biggest change — probably since magazines first began being published in the 18th century. And that change is accelerating, thanks to the pandemic. It’s speeding the transition to digital consumption of media of all types.

So while traditional magazines aren’t doing so well, the magazine story format is strong?

I’m not in a position at this point to comment on the state of the industry. Obviously there are challenges on the business side, but I don’t want to be associated with the notion that traditional magazines are getting weaker and weaker. What is the future of print? Well, fortunately magazine storytelling doesn’t depend on paper. You can read great magazine stories every day online.

How big of a field do you draw from when picking stories for “The Best American Magazine Writing?”

For much of it we draw exclusively from the stories that are nominated for the National Magazine Awards. Occasionally I reach outside of those nominees and try to pull in something that is representative of a new trend. So right from the get go, we have a limited number of stories that we draw from. I know that there’s great work that’s not, for a number of different reasons, submitted to the National Magazine Awards. But we begin with their nominees in what I call the reporting and writing categories, which are reporting, feature writing, profile writing, essays, criticism, columns and commentary. But sometimes we reach out beyond that. This year we took one from The Washington Post on prison life. The challenge isn’t picking the best, it’s picking the most representative. Because you could theoretically put together an entire edition from the work of the New Yorker or The Atlantic or a number of other magazines that are regularly honored by the National Magazine Awards.

What sort of editorial balance are you looking for?

When we put together the lineup for each year’s edition, we want a book that represents a broad range of magazine writing. Certainly feature writing and reporting and essays are important, but it should also represent the trends we see in magazine journalism. For instance, one big trend is regionalism. The audience is more fragmented and the magazines themselves, to a certain extent, are decentralized. New York is still obviously the center for magazine publishing, but there’s an extraordinary number of great magazines that are published outside of New York. We want to put together a collection that represents this. The challenge isn’t so much finding great work, which is served up on a platter by the National Magazine Awards judges, but putting together a collection that represents magazine storytelling today.

Did you get a lot of pandemic stuff this year, or was it too soon in the editorial process to see that?

It was too soon. The National Magazine Award judging for the next edition is actually going to take place later [in April], which is later than it’s been in recent years. The deadline used to be at the end of the year. This time we pushed a little bit later because everything is sort of running on that extended schedule because of the pandemic. I think we’ll see the impact of the pandemic on the finalists, and also, I expect, the impact of issues around social justice that played important roles in the national conversation.

What’s the future of magazine journalism?

I like to say, probably too often, that if someone says they know what the future of media is, you should get up and run away from them as fast as you possibly can because they’re obviously crazy. I don’t think anybody really knows the future of media. Or if they do, they’re rich and I haven’t had a conversation with them. However from my perspective, I think we’re actually looking at a golden age of journalism, and especially magazine journalism and storytelling. Even though the business is challenged, the stories themselves have never been better. In addition, the techniques of magazine storytelling have been adopted by all forms of media. For instance, the front page of every newspaper now has what was once considered a magazine story. And that same kind of storytelling has influenced electronic media as well. I think that the age of old-fashioned newspaper media is dead—especially since news is available on such an accelerated schedule. The need to put the news into context is becoming increasingly important for newspapers, as well as other forms of media. Obviously I’m prejudiced, but I think the model for that is magazine storytelling.

Sam Stall has written dozens of books and hundreds of articles, including an interview with Les Zaitz for the Fall, 2020 issue of Quill.