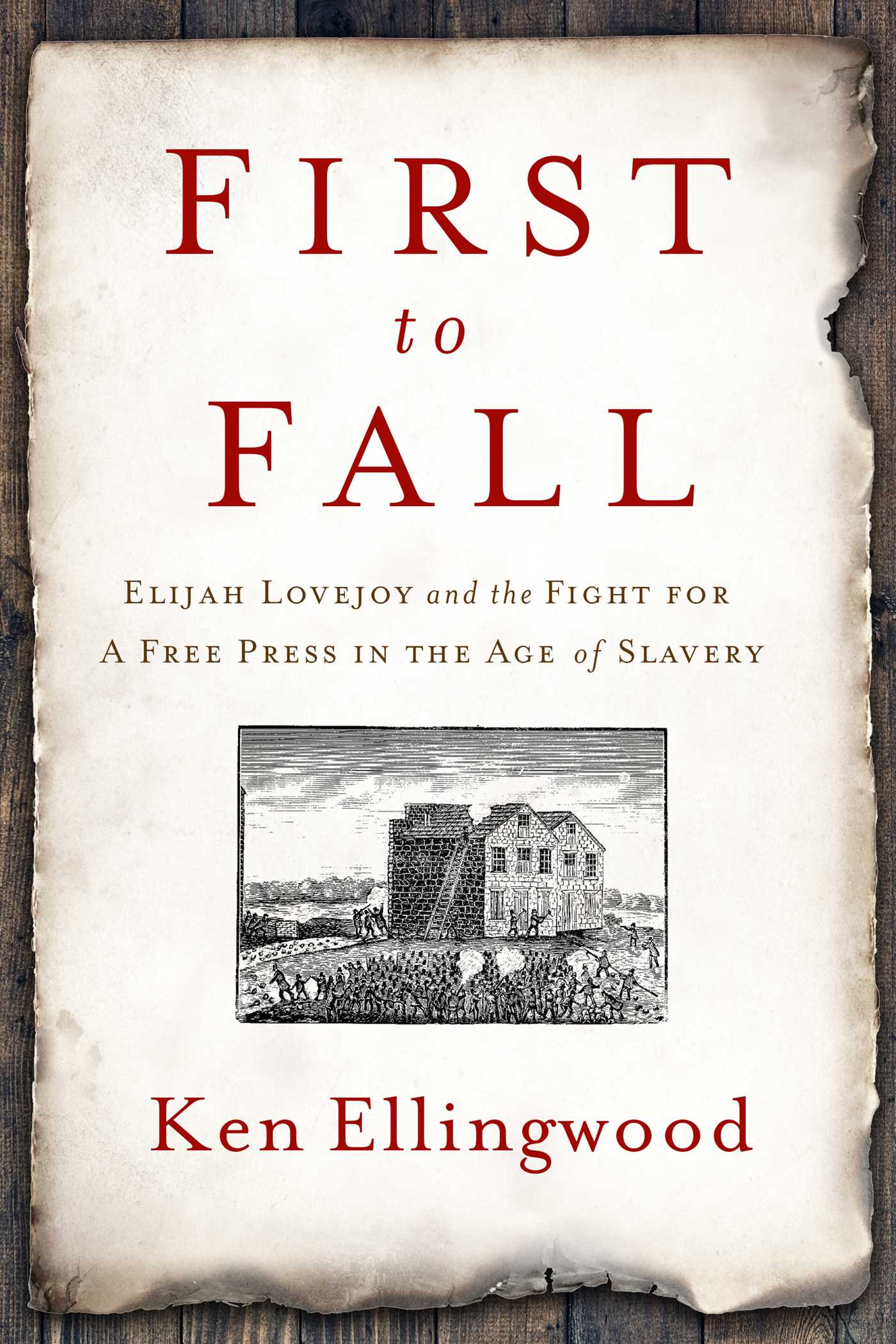 Ken Ellingwood readily admits that the subject of his new book is not exactly a household name. But for anyone who believes mightily in the First Amendment, Elijah Lovejoy was a titan of its promise and protections.

“First to Fall: Elijah Lovejoy and the Fight for a Free Press in the Age of Slavery” is Ellingwood’s deeply researched story of a man in the 1830s who used the power of the pen to speak out firmly against the horrors of slavery, fighting back harder with every death threat and unruly mob who came after him.

Lovejoy, killed in 1837 just two days before his 35th birthday at the hands of a pro-slavery mob, had a gigantic impact on 19th century figures such as abolitionist John Brown and Abraham Lincoln. While he struggled with his religion early in life, he found his calling by becoming an ordained minister in 1833 after completing the Princeton Theological Seminary. His anti-slavery beliefs challenged the sacred, which placed him in a precarious position with those who believed slavery was a biblical right.

Lovejoy not only observed plenty of devastating incidents, but also faced danger himself, all of which shaped his resolve and led him down the path of literally fighting for abolition until his final breath.

Ellingwood, a former foreign correspondent for the Los Angeles Times, sat down to chat from his home in Abu Dhabi about his book. He spoke of his initial desires to dive deeper into the life of Lovejoy and his impact on modern journalism, and if today’s media is passing the test after five years of being derided as “fake news.” 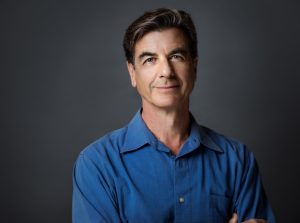 Elijah Parish Lovejoy can be considered the father of freedom of the press, yet you mention that many Americans have probably never heard of him. What put you on the journey of learning more about this man and his impact on modern journalism?

It was really kind of an accident. I had a 20-year career at the Los Angeles Times, then found myself in China for my wife’s job, when I got a teaching fellowship at a Chinese University. They wanted me to teach their journalism students about American journalism, and I thought it was a great opportunity to engage with principles of American journalism without challenging their own system directly. I introduced them to Elijah Lovejoy, which was sort of a footnote in a unit we did on abolitionists.

At the time, I had known a little bit about Lovejoy but never really dug in too deeply, and my surprise came when I saw the reaction of the students who were taken by his story. This universal tale of one man fighting against the greater forces of evil, and perhaps not prevailing with his life in the end but fighting the good fight all throughout. It was around 2014 when I started working on the book, which was before we saw a lot of the developments in the past five years in American journalism. It has such tremendous relevance to the current moment — the denigration of truth, and the disparaging of journalism as fake news.

Lovejoy had a strong feeling that his work could result in his death, and sadly he was correct. He was killed while protecting a printing press.  Was that inevitable?

You can feel in the book the tension building, like this is coming to a head. He’s given a lot of exit ramps but he doesn’t take them, and he seems determined to carry the fight on. What I found remarkable about him was how he evolved during his career. There was his editorship where he went from being rather antagonistic towards anti-slavery activists and then began to embrace their stances, even the more radical ones.

As the pressure against him increased, he married [his anti-slavery position] to committing to the freedom of the press. And I think there’s just no other more powerful proof of a person’s courage and commitment than their willingness to sacrifice their life for it. Even though he was fairly anti-Catholic and some of his commentary against the Irish was rather infuriating to read, what’s undeniable is that this person was willing to put his life on the line.

To continue that thought — do you believe that he felt his role as a journalist was more important than any other role in his life, including being a husband and father? Did getting the truth out supersede every other role he played in life?

He may not have consciously made the choice of one over another, but I never saw any evidence that he was willing to set aside his larger principles for any other interest. I know he wanted the bullies, the mob and the people who attacked his home and terrorized his family to leave him alone.

He was really a person acting alone, and as a working journalist myself, a lot of what we do as journalists we do alone. I’ve worked in a lot of difficult zones of conflict, and the choices you make are not just each day or each week, but each moment you’re on a story. Do I go there, do I go that extra step, do I take the chance? These are calculations of courage you have to make when you’re on your own.

Abraham Lincoln mentioned Lovejoy in a very powerful speech in 1857 — “Lovejoy’s tragic death for freedom in every sense marked his sad ending as the most important single event that ever happened in the new world.” A huge function of journalism is to speak truth to power, and keep leaders accountable for their actions. Yet throughout history, this profession has put truth tellers in the firing lines of those who will do anything to silence their voices. How much do you feel that Lovejoy’s life and death has had an impact on journalism to this day?

I think it’s had a great impact in the evolution of modern journalism. The landmark Supreme Court rulings, press freedom and all the cases from the 20th century we all learned in journalism school, he didn’t have all that. He had public opinion. It wasn’t the result of any great court cases that allowed him to push forth his cause, he only had his actions.

One of the things that’s had a lasting influence is this idea that journalism is meant to be a forum for all kinds of opinions. There also needs to be acceptance or tolerance of viewpoints that aren’t necessarily popular. Those who were seen as radical at a certain moment, as were the abolitionists, ultimately were vindicated. The cause that many people despised at the time was right, and Lovejoy and the reaction to his death was a step forward in this consensus that there has to be the free exchange of ideas in the American press.

To expand, slavery was one of the first things to test the limits of what a free press could handle. As you said in the book, “Those who chose to take on slavery were attacking a structure through which a number of fundamental forces coursed: economy, morality, racial identity, culture and sectional political clout.” How do you feel our media has fallen short of these lofty goals?

If you look at the reactions to coverage of the Black Lives Matter protests and the killing of George Floyd, the press became a big target. Journalists are now operating in much more dangerous situations. We saw any number of cases of photographers being attacked for doing nothing more than carrying out their jobs. If you look at the Jan. 6 insurrection and the out of control mob that ran amok at the U.S. Capitol, what did they do before they entered the building with force? They attacked journalists and the equipment they use, trying to intimidate and actually impede the work of journalists.

The most worrisome trend is the change in climate in which these journalists are operating. It’s tied in with the overall attempt to devalue the independent and free press in our country, and that’s what worries me. Having a story like Lovejoy’s reminds us that the freedoms that were fought for are really fragile. They didn’t just come out fully baked at the time of the founding of the country. We had to actually work and fight for them and make them functional in the way they are now.

What were some things that really surprised you as you did your research?

One thing I found extraordinary was the degree to which the country in which Lovejoy operated was determined to make sure that journalists did not discuss the topic of slavery. In the book I call it a suppression regime. This vast effort, formally in laws that were passed in the south, a practice of intercepting abolitionists journals in the mail, and a gag rule that was passed in the House of Representatives. All of which added up to a strong effort to prevent the topic of slavery from being discussed. And then you add in the kind of extra judicial actions of violent mobs, and it all adds up to a really broad suppression campaign across the country that lasted for years. It took this topic, America’s worst sin and most fundamental flaw, and left it as a taboo subject that could not be discussed. The cost of trying to discuss it, as Lovejoy found out, was violence and in his case, death.

I think it’s a really surprising chapter in American history that makes me wonder what would have been different about the course of history if there hadn’t been a successful stamping out of discussion over slavery, but a free interchange of opinion everywhere in the country instead. Of course we’ll never know the answer to that. I think we have to consider the injury to truth as one of those legacies, and Lovejoy’s attempt to be an antidote to that.

In the last five years through the Trump administration, it feels that the Constitution was tested in ways that it has not been tested before, or at least in a very long time. Do you feel that with all we’ve seen and been through, the Constitution came out stronger, or do you feel it’s been forever damaged?

I think the jury’s still out and we’re still in the moment. I don’t know where we will end up but in some ways I think we really acquitted ourselves well as a country. I mean, the fact is that it’s still standing. There’s still a free and independent press. The Washington Post and New York Times still get scoops, and that’s important.

I do worry about the overall climate, because at the end of Lovejoy’s story, it was really about the American reaction to his death, and the clear verdict that we will not go as a nation. We will not accept the kind of censorship of the press through laws or through mobs and lawlessness. In the moment that we’re currently in, I think our rights as a free press are being tested and I have my worries, but we can also see that if we came out stronger with what happened to him, we still have the ability to come out stronger now.

I hope that Lovejoy’s story helps remind people of how we got here and the costs and sacrifices that were made along the way so we don’t demolish those rights.

David John Chávez (he/him) is a Bay Area–based theatre critic and arts journalist. He has contributed to Theatre Bay Area, The Mercury News and AmericanTheatre Magazine, as well as his own website, bayareaplays.com. Twitter:@davidjchavez