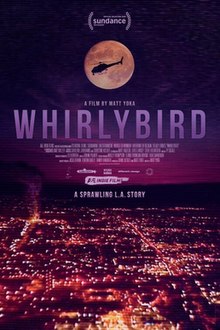 “Whirlybird,” a new documentary by Los Angeles-based filmmaker Matt Yoka, is a deep examination of Zoey Tur (who lived life as Bob until coming out as a transgender female in 2013) and Gerrard. Now available on Apple-plus and other streaming services, the film looks at the meteoric rise and precipitous fall of both their professional and domestic lives.

Their success was unparalleled. The numerous awards for journalism and their footage of two infamous moments in American media history – the beating of Reginald Denny at the onset of the 1992 Los Angeles riots and the Ford Bronco chase of O.J. Simpson in 1994 – put them into a new stratosphere of fame and notoriety. 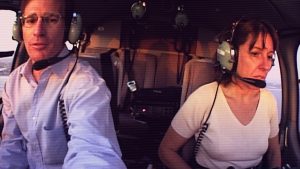 Yet their success was on borrowed time. The pressure and trauma of such high-stakes careers careened into their married life, which ended in 2003 after 23 years.

Yoka took time to answer questions about the film, which covers the devastation of trauma on a professional career and personal life and Tur and Gerrard’s long-term impact and influence on journalism in Los Angeles and beyond.

The following has been edited for space and clarity.

What impact do you think Tur and Gerrard had in the world of journalism, especially in today’s media, which can often be an intersection of news and reality television?

Tur and Gerrard were the continuation of a long history of reporters trying to be at the center of the story. Zoey makes the point in the film that they weren’t the only ones chasing news — journalism has always been a cutthroat business of “who can get there first.” And I think they deserve credit because I don’t believe it’s always so easy to discern what’s “newsworthy” as events are unfolding. A high-speed pursuit is a danger to people in the area, but is that why people are watching it? Tur and Gerrard believed it was their job to bring the city of Los Angeles into everybody’s TV room, and they did that incredibly well, better than anyone. But it might be the news directors and newspaper editors that share a lot of the responsibility for what content ultimately reaches the public. That said, I do think Tur and Gerrard were so good at it, they inadvertently turned breaking news reporting into a form of live entertainment. The term that comes to mind is “news junkies.” I think Tur, Gerrard, and the audience were all news junkies (myself included). I thought about that phrase, its allusion to addiction, a lot when making the movie and just living through the Donald Trump presidency.

Clearly, they were a very successful news team when it came to breaking news and acquiring massive viewership. They even raised someone, Katy Tur, who is a star in the news business as an MSNBC on-air talent. Are they able to look back and see the success they’ve had, or do they view those years in more regretful terms?

As extraordinary as Zoey and Marika’s story is, I hope this is a theme that audiences identify in their own lives. Many of us become so obsessive with our work that we end up sacrificing our happiness and maybe even the happiness of those around us. At least that’s something I’ve struggled with. But of course, the highs and lows of their relationship is pretty extreme — the helicopter providing an apt metaphor. I think they are still processing these highs and lows, but I have endless respect for how they explored and grappled with their lives so candidly in this film.

One of the worst dynamics of the kind of news they covered was that it had a huge impact on the way Black and brown people were viewed by the public. Often, without context, images of people of color struggling were brought into millions of homes, often irresponsibly. As a Los Angeles native, what impact do you feel this type of media had on marginalized communities?

The impact was devastating and immense. There are scholars dedicated to examining the ways journalism and media creates bias, reinforces stereotypes, divides communities, and that’s just the tip of the iceberg. I felt it was important to acknowledge and shine a light on the consequences of that kind of reporting in “Whirlybird,” but I didn’t want to do it in an informationally driven way — peppering in “expert voices” etc. At its core, “Whirlybird” is the story of a relationship, it’s a marriage story. I hope in telling an emotionally driven and narrowly focussed story like this, we recontextualize how media comes to be. “Whirlybird” isn’t the definitive examination of these issues, but perhaps it provides a space for reflection on who creates media, what kind of media we consume and what are the effects of that kind of diet. I don’t want to tell people what to think, I just want to give them the space to think.

But to try to answer your question more specifically… I don’t want to speak for Tur and Gerrard but in talking with them I got the sense that people were dying on the streets, communities were suffering, they couldn’t just turn their camera off. And after living the archive, I can confirm that they covered every type of story in L.A. imaginable. I don’t think anyone documented Los Angeles during that time period more than that couple. That’s what was so kaleidoscopically mind blowing about their archive. And I wanted audiences to feel that in both positive and negative ways.

The images of Reginald Denny and the footage of the Los Angeles Riots in 1992 are so hard to watch. The documentary seems to suggest this was a huge turning point for their personal lives and their careers. Even when the Tur family went to Hawaii to relax shortly after, the cameras never went off and they still seemed so tense. What does this say about the toll that this business can take on families when there is no separation between personal and professional lives?

I don’t think we talk enough about trauma when we talk about news reporters. But I think I understand why that is. You look at Reginald Denny being beaten or even those doing the beating and the suffering among them all and the idea of wondering how that affected the reporters covering the crisis might seem borderline offensive. But I think that’s such an interesting and helpful thing to reflect on in terms of what’s going on inside the minds of the people bringing us the news. It’s not even that I’m necessarily trying to make the audience sympathize with them, I’m just trying to better understand them. When it comes to the 1992 riots, I think Marika and particularly Zoey started seeing society descending into chaos. That’s why I love that scene on the beach in Hawaii because you couldn’t have a greater contrast between the serenity of the location and the turmoil of the mind. Marika talks about how they couldn’t do the work they do in a place like Hawaii. And Zoey expresses a lot of nihilism, saying there really aren’t any solutions, that society has to destroy itself. These are people who are really struggling with what they are witnessing and what is their role in it all. We then see that struggle really start to permeate their lives.

Without giving any spoilers, Bob’s transition to Zoey, after suppressing her self-described “gender dysphoria” for so long, led to some solace but still so much devastation in how she contributed to the collapse of her family. In one moment, she tells a horrified Marika, “I don’t know how to communicate with you any other way than through violence.” Do you get a sense that she feels she could have had a more traditional home life while still being the pioneer she was? Or were those two ideas that could never coexist?

I try very hard not to speak for Zoey, so I’ll just quote something she said in the film that I think is the key to better understanding the life she lived. She said, “one of the things I liked about breaking news is that it diverted my mind from the things that were going on in my head.” Going back to my previous point about the extraordinary yet familiarity of their story, what she is saying is something I feel many of us can relate to.

David John Chávez (he/him) is a Bay Area–based theatre critic and arts journalist. He has contributed to Theatre Bay Area, The Mercury News and American Theatre Magazine, as well as his own website, bayareaplays.com. Twitter: @davidjchavez

Previous story
SPJ Journalist’s Toolbox Tool of the Month: How to build a cool chart in Google Flourish — Handout + video
Next story
Ms. Mayhem: A self-funded news website takes pride in reporting on the intersection of race, class, gender, ability and sexual orientation