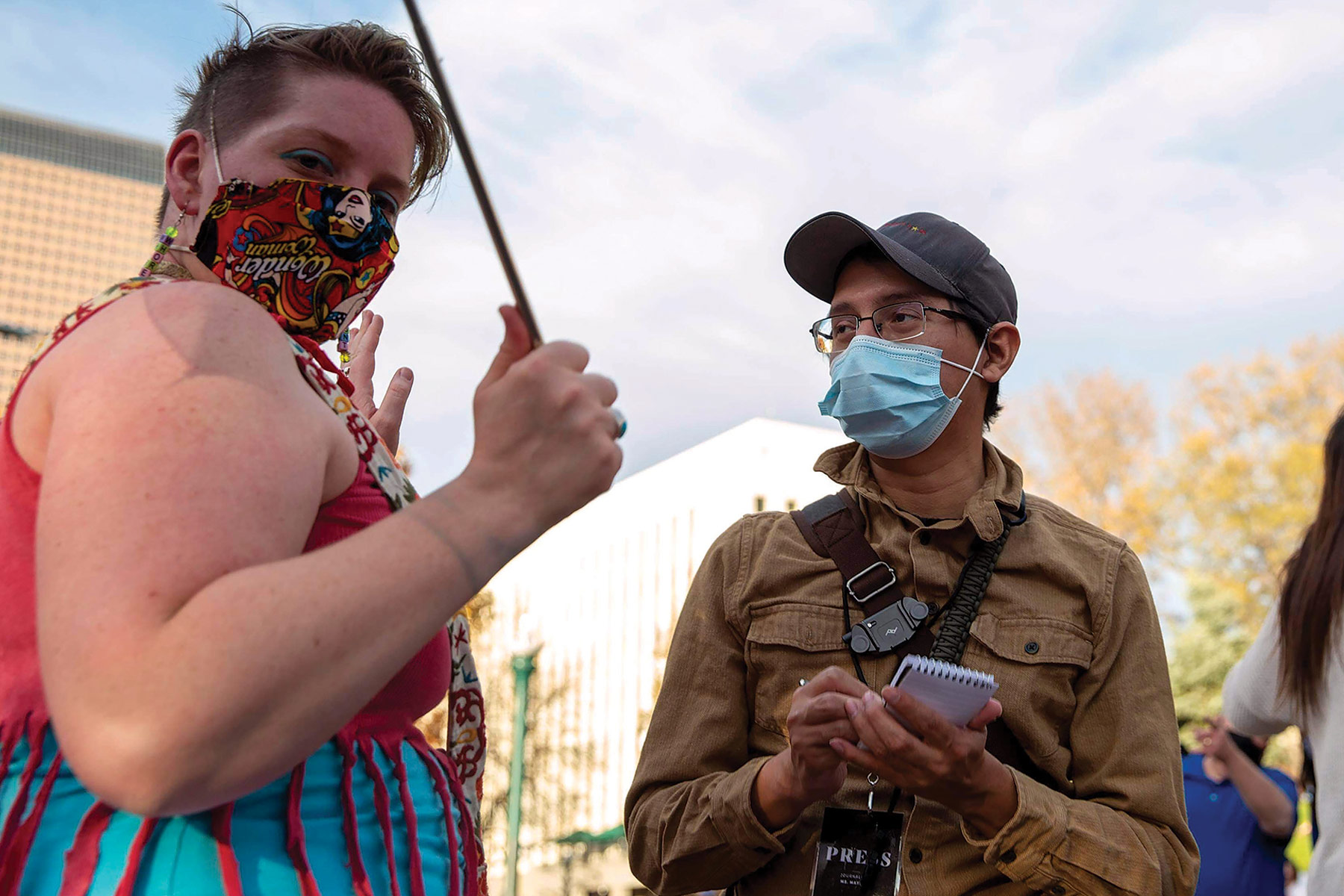 “I realized that I wasn’t going to be able to write the stories I wanted to write unless I was working for myself,” she said. “Being a new reporter to any newsroom, you’re pretty much stuck with a lot of the grunt work and I just realized that’s not really the path for me.”

Lauterbach also had interests, including tattooing, motorcycling, skateboarding and graffiti art, that aren’t often a major focus at legacy publications. Especially women in those areas.

So back in Colorado, after a long day of work on The Metropolitan, MSU Denver’s student newspaper, Lauterbach floated the idea past a few of her friends while they were blowing off steam at the student union brewery.

And from there Ms. Mayhem was born.

Ms. Mayhem, founded by Lauterbach, Cassandra Ballard and Ali Mai, officially launched May 22, 2020, as an online publication “dedicated to authentic, in-depth news, and uncovering the stories of underrepresented voices.”

Ms. Mayhem, self-funded by Lauterbach, focuses on reporting from the intersection of race, class, gender, ability and sexual orientation, as well as reporting on and for marginalized communities by talking to those most affected by the story. It focuses on covering “mainstream stories” from a different perspective and telling the stories of women and other femme-identifying individuals disrupting male-dominated fields. Staff members, mostly women, are paid as freelancers.

“It is and it isn’t” a full-time job, said Mai, who is the visual editor. She’s paid per article and hourly for administrative work, supplementing her income by freelancing for the nearby Longmont Leader, and doing various gigs such as food delivery. Co-managing Editor Esteban Fernandez also works weekends at Alamo Drafthouse Cinema.

“We don’t have anybody exclusively covering beats, because that takes time and money that we unfortunately don’t have,” Fernandez said. However, “that also means we can be more flexible with what we cover and people are free to pursue passion projects.”

Many of Ms. Mayhem’s core writers are early career journalists and it has had hiring drives to pick up more. Currently, it’s putting out about two editorial packages per week and Lauterbach would like to get to at least once per day, if not more often.

Diversity is important. “That’s been kind of a core foundation of Ms. Mayhem since the start,” she said. “We really wanted a newsroom that was representative of the communities we were writing about. Most of my staff identifies as queer. We’ve got a ton of writers of color. I mean, I’m disabled. We’ve also got a couple former or current sex workers.”

“We try and have as big of a blend as possible on the news team. So that way, it allows us [to write] for communities instead of about them. One of the ways we do that is by having a person who belongs to that community write the story.”

“Indeed, a core part of journalism is developing sources, and the more journalists knows about the inner workings of a community, the better equipped they are to know who to ask, what questions to ask, and how to frame those questions in a way that gets to the heart of the story,” Nicole A. Childers, executive producer of Marketplace Morning Report, wrote for Nieman Lab last November. “If a journalist is from a community they are reporting on, they’re more likely to know the history of that community and be able to put it into proper context for their audience.”

“When underserved populations don’t see people who look like them reporting the news, they are more likely to discount those news outlets,” Dale Willman, author at State of the Planet, wrote in “Journalism Needs More Diverse Voices.”

How does that play out in practice? For example, this tax season Ms. Mayhem published an informational article about how sex workers file their taxes. One of the first stories was about how the sex worker community was impacted by COVID-19. The feedback received from the sex worker community was positive and they were happy to have their voices heard, considering its long history of not trusting journalists due to being outed or put in danger.

After the Atlanta massage parlor shootings in March, Mai covered a candlelight vigil for the victims, which also doubled as a protest against anti-Asian hate. From what she could tell, she was the only Asian and woman covering the vigil.

“Sometimes people are told, ‘You can’t cover a story that is focusing on the issues and experiences of the Asian community if you, too, are a part of that community,’ because we’re too biased,” Mai noted. “At Ms. Mayhem, we see that that as an asset, actually.”

It goes beyond representation. “It doesn’t mean that I’m the only one who can go cover the Asian community,” she added. “But just having someone there working in proximity to you allows you to be able to have those conversations, that dialogue and making sure you’re saying, you know, ‘Am I right? Am I using the correct word? Is this terminology correct? What is your perspective? Is there an angle I’m missing?’ And so, I think it’s really great that we’re building a newsroom that has those conversations.”

Making sure to think about stories from the perspective of who is involved is important to Fernandez, as well. He said sometimes other local outlets miss out on including minority voices that are impacted or crucial to a story.

Plus, he added, “We can call each other out on our bullshit. If I see someone exhibiting their bias…I tell them, ‘Hey, let’s step back. I can see you’re very personally invested in it.’ And other people do the same to me…. Then we’re not falling for groupthink.”

While start-ups are a challenge anywhere, Denver has some advantages.

Although The Denver Post has fallen victim to major layoffs, downsizing from a staff of 350 to less than 70, successful newcomers such as Chalkbeat provide reasons for optimism. Lynn Schofield Clark, Chair of the Department of Media, Film and Journalism Studies at the University of Denver, also noted the influence of the Colorado Media Project, which was formed in 2018 to fuel journalism innovation.

“Much of their efforts have been around finding new business models that support journalism and doing a lot of grant writing to support initiatives that are of interest, and then also doing collaborations and really building relationships among journalists across the state,” said Clark. “And we’ve become one of the kind of shining stars in the U.S. around that issue.”

She noted Ms. Mayhem may also see some competition with other Colorado news outlets such as: OUT FRONT Magazine, the second oldest independent LGBTQ publication in the U.S.; Westword, a Denver-based publication focused on local news, restaurants, arts and culture; and Denverite, which focuses on covering the city and was purchased and absorbed into Colorado Public Radio in 2019.

Ms. Mayhem’s success, observed Clark, may depend on outside investors and funding. But that wasn’t originally part of the plan. Lauterbach said the founders decided to avoid outside investors so Ms. Mayhem could stay independent. It has only recently begun looking for advertisers.

The pandemic made funding a greater challenge. Prior to its launch, the staff was looking for grants and other funding, but much of that was diverted to be COVID-19– specific. And because Ms. Mayhem had just launched, it was ineligible for pandemicrelated support from the government.

Working with friends has had its upsides and downsides.

Mai said that overall it’s a blast getting to work with people she’s built relationships with and became friends with through working together at the university, but it can be a challenge to find the separation between work and friendship.

“I definitely made some mistakes that I’ve learned from,” added Lauterbach. “No. 1 is definitely blurring the lines between friendship and business. We’ve lost a couple people from the team that transferred over from The Metropolitan, and I think that it was mostly just because there was a miscommunication between when it’s time to be friends and when it’s time to be co-workers.”

Another lesson for Lauterbach: Not to get too friendly with activist groups. “When we were reporting on the protests, there was some misunderstanding from people on Twitter that we were activists and that we were ‘on their side.’”

As for the future of Ms. Mayhem, the first goal is to find funding or revenue that allows them to hire full-time staff and more freelancers and to continue expanding the newsroom.

“We’d like to be national, if not international,” Lauterbach said. “We want to be kind of like the next Broadly or Bustle. But still keeping in mind that communitybased, kind of grass roots place we came from…. We want to have an established connection with any community that we decided to expand to.”

In the meantime, they’re considering test expanding to New York City at the end of the year where co-Managing Editor Annie Burky is pursuing her master’s.

“There’s no question that we need more journalists at this time,” Clark said, “to do more of the work of especially accountability journalism, but also community journalism — just reporting on what’s actually happening in our community so that we can all know the people who are part of our lives in a better way. Then we also can make better decisions, both together and individually.

Zoë Berg is the communications coordinator for the Society of Professional Journalists and the assistant editor of Quill.

Previous story
‘Whirlybird’ documentary covers copter couple who covered L.A.
Next story
The 19th*: Gender, politics and policy are the keywords at a bold start-up writing “for communities rather than about them”