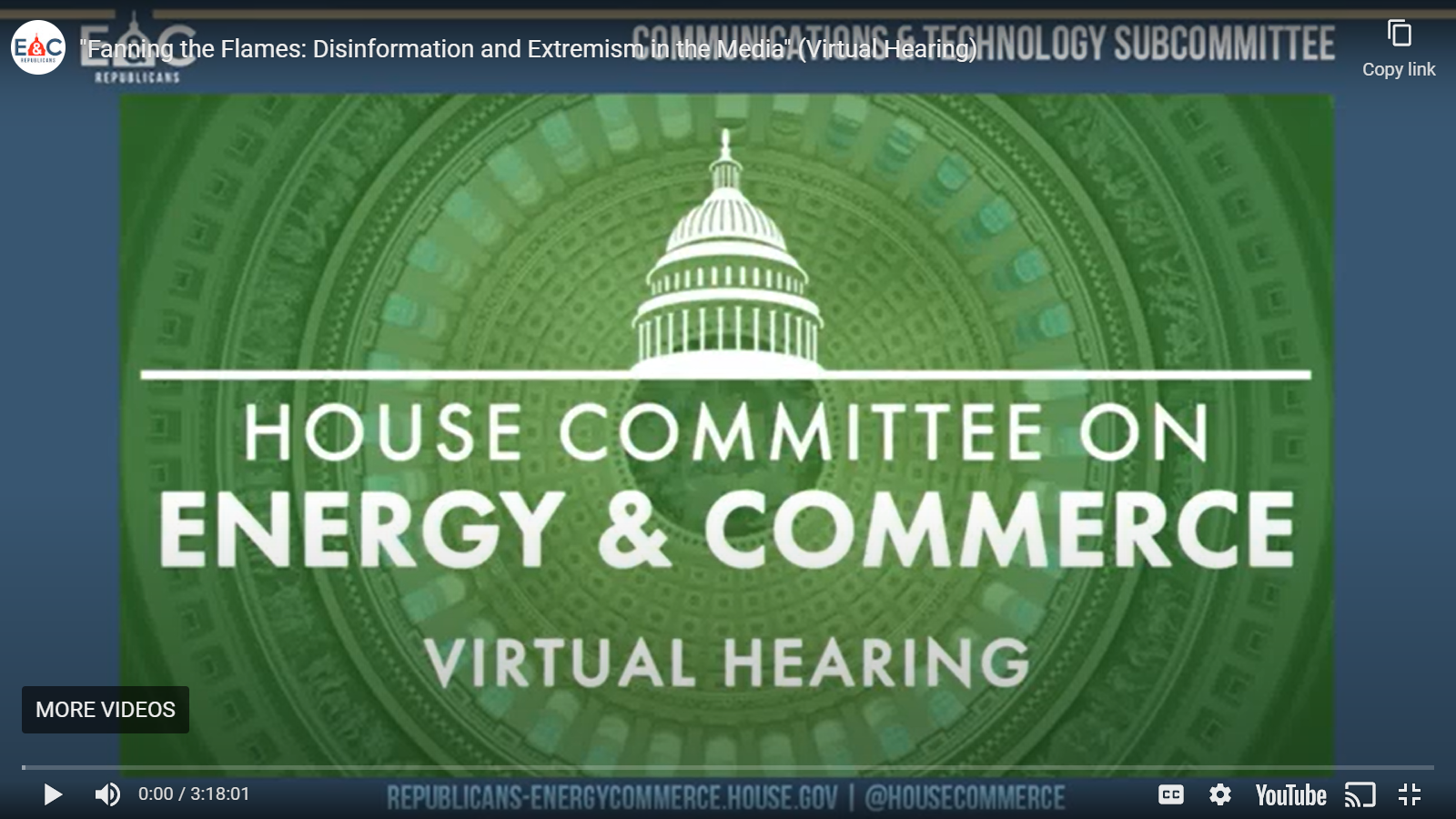 Since government can’t censor news content, can it control it indirectly through threats and intimidation?

A congressional inquiry this year led by Democrats hinted at it and attempted to examine whether conservative news media were responsible for inciting violence.

The representatives said they were just asking questions. But did they go too far down the slope of content control?

And if direct pressure is overstepping, can government control the news by regulating, threatening or intimidating the platforms that host the offending news services?

The House Energy & Commerce Committee conducted a hearing last February on whether inaccurate and biased reporting by conservative news networks is causing real harm, such as encouraging people not to get coronavirus vaccines based on bogus reports about them. (View it here) The committee focused mainly on whether conservative charges that the 2020 presidential election was stolen inspired violence, especially the Jan. 6 invasion of the U.S. Capitol. Two California Democrats on the committee also sent a threatening letter to the CEOs of the 12 major satellite/Internet/cable companies complaining about their allowing “misinformation, disinformation, conspiracy theories and lies” on their platforms, mainly emanating from “the right-wing media system.”

So far, it seems the investigation may be just huff and puff to intimidate news carriers, as the representatives and committee involved have taken no action on the matter and and haven’t even released the results of their inquiries. Their staffs would not even discuss the matter.

Reps. Anna Eshoo and Jerry McNerney wrote to Comcast, Cox, Alphabet, etc. reminding them that “purported news outlets have long been misinformation rumor mills and conspiracy theory hotbeds that produce content that leads to real harm. Misinformation on TV has led to our current polluted information environment that radicalizes individuals to commit seditious acts and rejects public health best practices, among other issues in our public discourse.”

The letter blames “right-wing media” specifically Newsmax, One America News Network (OANN) and Fox News for false reporting about the November elections, for instance. They wrote “Fox News…has spent years spewing misinformation about American politics” and that these networks “have been key vectors of spreading misinformation related to the pandemic.”

The letters all questioned the executives about their polices. The one to AT&T CEO John Stankey, for instance, said “As a company that serves 17 million Americans, AT&T plays a major role in the spread of dangerous misinformation that enabled the insurrection of January 6th and hinders our public health response to the current pandemic.”

Blame is being cast on the carriers, noting that “to our knowledge, the cable, satellite and over-the top companies that disseminate these media outlets to American viewers have done nothing in response to the misinformation aired by these outlets.”

The representatives demanded answers from the executives on their “moral or ethical principles (and) content guidelines” in choosing what to air and what they did following the election and riot “to monitor, respond to, and reduce the spread of disinformation, including encouragement or incitement of violence….” They asked if the platforms plan to continue carrying the aforementioned news sites and “If so, why?” They suggested they may send more questions.

Nothing has come out of the threat of regulation yet. And it seems no one wants to talk about it. The representatives have not released responses to their letters. Committee majority Press Secretary Elysa Montfort referred Quill to the offices of Eshoo and McNerney. But Eshoo Press Secretary Katy Nystrom and Legislative Director Asad Ramzanali did not respond to multiple attempts to reach them by phone or email. Neither did McNerney Press Secretary Nikki Cannon.

Quill also sent queries to all 12 providers receiving the letter. None answered. Tim Mulvey, press secretary for the House Select Committee to Investigate the Jan. 6 Attack on the Capitol also didn’t respond to a query on whether the committee would explore alleged media incitement as part of its probe.

(Author note: In more than 40 years of covering Congress, I have never been so badly stonewalled.)

But the Capitol riot doesn’t constitute the only violence that Fox News is accused of provoking. The committee received a missive from the National Hispanic Media Coalition complaining about “anti-Latinx and anti-immigrant programming” appearing on the conservative networks. It noted that “in 2019 alone, Fox News made over 70 on-air references to an invasion of migrants, aired at least 55 clips of Trump calling the surge of migrants an invasion, made 24 references to an invasion on Fox & Friends, Fox & Friends First and Fox & Friends Weekend, combined, and allowed four Republican members of Congress to spew invasion rhetoric on their new platform.”

The coalition, devoted to advancing Latinx representation on all forms of media, complained that the networks “face little to no consequences when airing hate and extremism that enables white supremacy, spreads false information, helps incite an insurrection, and ultimately takes lives. Media is one of the most powerful institutions if influence in this country, and until the media is held accountable for the role it plays in the dissemination of hate and violence, equity and justice will remain out of reach for the Latinx community.”

Thirteen Republican representatives signed a letter to the Federal Communications Commission (FCC) saying the letter sent to carriers was “disguised as ‘oversight’ but clearly designed to pressure these companies to block certain conservative media outlets.

Rep. Bill Johnson (R-Ohio) complained at the hearing “I have to say I am seriously disappointed and blown away by [the letter] to the broadcasters pressuring them to remove conservative news channels from their networks, a letter that looks earily similar to the statement released by the Chinese Communist Party when it banned the BBC.”

West Virginia’s Republican Attorney General Patrick Morrisey wrote the companies that “the letter contains highly intrusive information requests, thinly-veiled threats, and a plea that companies consider cutting off access of millions of Americans to three conservative news channels that these members dislike.” Morrisey compared the letter to the “Hollywood blacklist.” (Morrisey assistant Tyler Ohrn said that none of the CEOs responded to him.)

And Newsmax complained that the letter misrepresented its coverage. Eshoo and McNerney wrote that as “a violent mob was breaching the doors of the Capitol, Newsmax’s coverage called the scene ‘sort of a romantic idea.’” Newsmax responded that the claim “is deliberately misleading” as it merely quoted an outside source “describing the rally before any violence or illegal action had taken place at the Capitol.”

Eshoo, however, said at the hearing that “Congressional Research Service experts reviewed our letter (and) saw no First Amendment problems….I think the idea that members asking questions violates the First Amendment is absolutely absurd. It’s our job to ask questions.”

One of the witnesses, Jonathan Turley, a George Washington University law professor and oft-quoted guru on constitutional and other legal matters, opined that “the fact that it’s a question doesn’t hide the fact that it is really meant as a really audible statement…with a question mark at the end.”

At the hearing, Ranking Republican member Cathy McMorris Rodgers warned that “Democrats may want to review the Fairness Doctrine,” which between 1949 and 1987 required broadcasters to present contrasting views of controversial issues. “Combating disinformation is a shared goal. But we do not want to follow the lead of authorization countries like China,” she said.

”Though the U.S. Supreme Court upheld the doctrine in 1969, “there is a substantial question of whether the fairness doctrine would be upheld today” in an era when more voices can be broadcast on more outlets, Turley testified.

Members of Congress aren’t the only Democrats seeking to use government as a cudgel against on-air news coverage.

In May, the office of Baltimore City State’s Attorney Marilyn Mosby issued to the FCC “a formal complaint requesting an investigation into the broadcasting practices and media content distributed by FCC-licensed station WBFF, a Baltimore City-based Fox News-affiliated network….”

The letter cites “a disconcerting and dangerous pattern: beginning with a slanted, rigged, misleading, or inflammatory headline; followed by a conspiracy theory; and supported with guest commentary from disgruntled ex-employees or political opponents that lend false credibility to their biased coverage or omission of facts.”

Senior Republican FCC Commissioner Brendan Carr immediately called the complaint “a chilling and direct attack on free speech and journalistic freedom. The complaint her office filed with the FCC asks the Commission to censor a newsroom simply because journalists are doing their constitutionally protected jobs and shining a light on the work of the State’s Attorney.” (Mosby is currently under a federal criminal tax investigation.)

Previous story
The 19th*: Gender, politics and policy are the keywords at a bold start-up writing “for communities rather than about them”
Next story
Why Lou Grant mattered (in memory of Ed Asner)