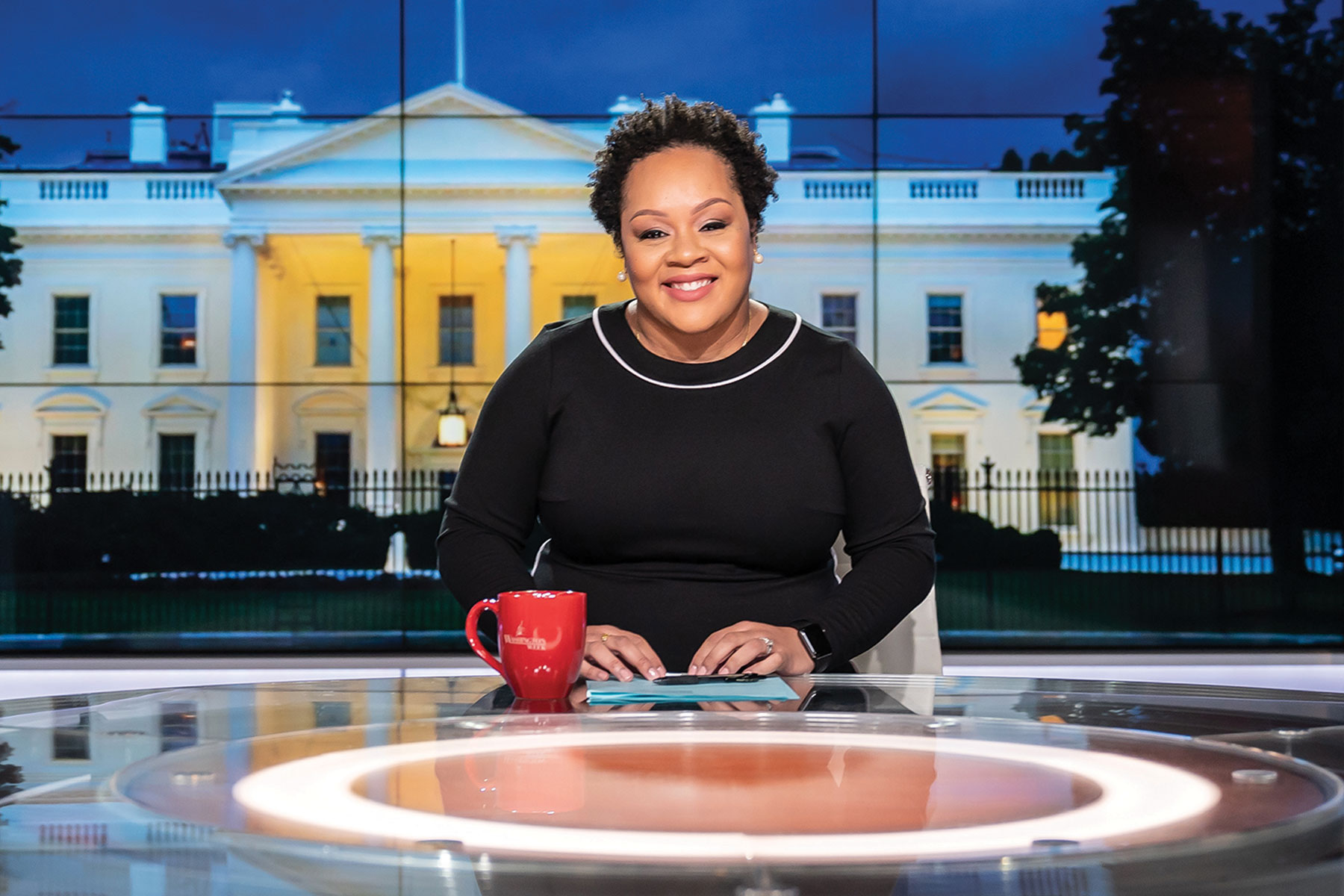 Yamiche Alcindor sees her role as seeking the truth on behalf of Americans and telling stories in ways that connect to their lives.

Alcindor is White House correspondent for PBS NewsHour and moderator of “Washington Week,” a PBS news analysis show anchored for years by her late mentor, Gwen Ifill. She also has worked at Newsday, USA Today and The New York Times and serves as a political contributor for NBC News and MSNBC.

“She is just a great journalist and a great human being,” said New York Times Editor Dean Baquet. “She is sober, bold and just so passionate about the profession. It is remarkable how much she has achieved, and I’m betting she will be seen as one of the great figures of the profession.”

Alcindor spoke to Quill about her career, which began budding during her junior year of high school while working as an intern at the Westside Gazette, a Black weekly newspaper in South Florida that she credits with teaching her journalism basics. “They took a chance on a young kid who was eager to learn and happy to work hard,” she tweeted last year.

What drew you to this profession?

I was interested in journalism because of the story of Emmett Till and civil rights journalism, and I just fell in love with the idea of writing about civil rights and human rights and politics in our country.

Are there any influences from your first jobs that still guide you today?

When I was at the Westside Gazette, understanding the role of the press was really, really important. They were constantly teaching me the importance of having reporting that gets at the hard truth of America. When I went on to the Miami Herald as my first big paper, there were so many lessons because I interned there for two summers. I was very nervous because I wasn’t even in college yet. I remember one of the editors telling me, “If you’re nervous, lean into that because it means that you’re doing something important.” And that’s something that I definitely keep with me.

Is there an overriding principle or philosophy that guides you as a journalist?

To tell the truth. And to tell the truth even if it makes people uncomfortable. I think journalism should be about being factual, being accurate. In the last year, we understood even more the power of that, whether you’re looking at democracy and the results of the 2020 election, whether you’re looking at racial violence in this country, when you look at the Tulsa race massacre and telling the truth when it comes to George Floyd and what happened to him and how that connects to all of the systemic racism that we see in our country.

You and former President Donald Trump had some verbal tangles when you covered his administration. He has called your questions racist, nasty and snarky. His supporters would say you were out to get him. How would you describe your approach to covering Trump and his administration?

I really just tried to tell the truth. I tried to be as accurate as possible. I tried to be fair and to tell the story of what was going on, whether it was the coronavirus or child separations or voting rights or, of course at the end, the results of the 2020 election.

When the president of the United States — some people would say the most powerful person in the world — singles you out and criticizes you in front of a bank of cameras, does that rattle you even a little?

I just tried to do my job. I try to stay focused on the idea that journalism is a service. A year ago, we were dealing with a country that was literally terrified. We had people dying left and right; we had people losing their jobs; I had cousins who were laid off in Miami from dry cleaners; I had friends who were makeup artists who saw their entire income dry up. You had single mothers who were trying to figure out how they were going to survive. They didn’t have time for us to be getting caught up or distracted with what could be sideshows and intense interactions. I was so focused on trying to get answers for those people. I didn’t think too much about what was going on because it was a terrifying, scary, scary year. The Trump administration at times was really misleading the American people, and they needed to be taken to task. They needed to be held accountable, and that’s the role of the press.

You have been a frequent target of the right, including criticism of some complimentary remarks you made about Deputy Press Secretary Karine Jean-Pierre, the first Black woman in decades to speak on behalf of the president, when she stood before reporters for the first time. What is your reaction to such criticism that suggests you have biases in favor of Democrats and against conservatives?

I don’t think about it too much because at the end of the day, journalism is about telling the truth. And it’s about being focused on that and not being distracted by partisan politics that has at times influenced the way people see my journalism. I don’t spend any time thinking about what people think about me in terms of whether they think I’m leaning toward the Democrats or at times leaning toward the Republicans. If you’re a good journalist, there are going to be people on both sides of the political aisle that will get mad at times, and my job is to just focus on being as fair as I possibly can be but also on being OK with the fact that people are deeply uncomfortable with looking at the truth that we’re dealing with right now in 2021.

Are there any lessons you’ve learned from covering the White House that have helped shape you as a Washington journalist?

For sure. I mean, there are so many lessons about not being afraid to call out people on live television if you need to. I am someone who now realizes there are times you’re gonna have to fact check possibly the president of the United States in real time in front of millions of people, but that is the role of the press. Especially last year, I really learned a lot of lessons about empathy in our reporting. During the pandemic, we were writing stories about social distancing and about working from home when, in fact, there were large swaths of the country, a lot of them Black and brown people, who were dying of the virus at higher proportions and higher rates but were also having to go in to work every day because they could not work from home. They were grocery store workers or a bus driver or an immigrant who was living seven people to a two-bedroom apartment. I really understood at the end of the year how to put regular people at the center, because in Washington it can be easy to get caught up in the “This is what Congress is doing now, here’s what some of the senators said, here’s what the president said.” Every day, people rely on us to tell their stories and rely on us to give them information that literally last year was life or death.

The public’s trust in the news media has been declining for the past four decades. Social media is filled with propaganda and disinformation that is sophisticated enough to convince many people the content is truthful and comes from legitimate news sources. How has this reality impacted journalism, and what can be done about it?

SPJ sees ethical journalism as essential for establishing and maintaining credibility, yet there continues to be high-profile examples of questionable decisions by newsroom managers and other journalists. Can you think of anything that can be done to put more focus on ethical journalism?

It has to be taught in journalism schools, but it also has to be echoed in newsrooms, where we’re working at fast paces. We’re working on breaking news. Every minute is a minute of you trying to churn out the next story. It’s a competitive market where we’re all trying to give people information. Even in the middle of all that chaos, we have to have managers that reflect ethical journalism. I also think that we just need to own up when we make mistakes. I’ve had corrections in The New York Times and USA Today. It’s not something I’m proud of, but when you make a mistake — you spell someone’s name wrong or you get a number wrong or you say something wrong on air — then you have to own up to it. That is the difference between journalism and people who are out there spreading information under the guise of being a journalist. We actually say, “Hey, we messed up. Here’s the way that I should fix this.” And I think that makes me more human.

The goal of the American Society of Newspaper Editors to achieve a level of newsroom diversity that matches the racial and ethnic diversity of the country by 2000 still hasn’t been met. The same is true in broadcast newsrooms. Do you see this as a problem, and if so, what can be done about it?

Diversity needs to be a core part of newsrooms, especially when you think about what we just experienced last year. We need to have more people of color; we need to have more women. We need to have more people who grew up in different communities, not just L.A. or New York, but also the middle of the country. Too many times we think of diversity as, “Oh, we’re doing people a favor by hiring more women or we’re doing African Americans a favor because we’re letting them into our newsrooms,” when, in fact, it should be the opposite. It should be that our journalism can’t be done correctly unless we have a diverse newsroom. Diversity should not just be hiring but keeping them and promoting them and getting them to run your newsroom. The fact that I’m the anchor of a show as a millennial Black woman is not lost on me how rare that is. And the fact that there are only a few of my colleagues who are like me is a testament that more needs to be done. I don’t think I’m an anomaly. I don’t think I’m the most talented Black woman out there. I think there are a lot of really talented people that just need the opportunity to be able to shine.

Whenever your journalism career ends — and hopefully that’s a long time from now — what would you like to have left on this industry and the people who consumed your work?

I hope my impact on journalism is that the world had a little bit more truth and a little more justice in it. I hope my journalism opens people’s eyes to the intersection of power and politics and reveals a way to be empathetic with people all over the world. That after my journalism is done, I will have shown people other people’s lives in a way they can relate to. Even if you’re not an immigrant or even if you’re not a single mother, you will at least understand even a little part of what their experience is like on this earth. My journalism is so much centered on trying to be relatable to people who are struggling, to working-class Americans, to immigrants in this country who are just trying to survive and thrive.

Rod Hicks serves as Director of Ethics and Diversity for the Society of Professional Journalists. Follow him on Twitter @rodhicks.

Previous story
From the President: Building by listening
Next story
SPJ Journalist’s Toolbox Tool of the Month: Tools in the classroom. Plus: Replacing “very”