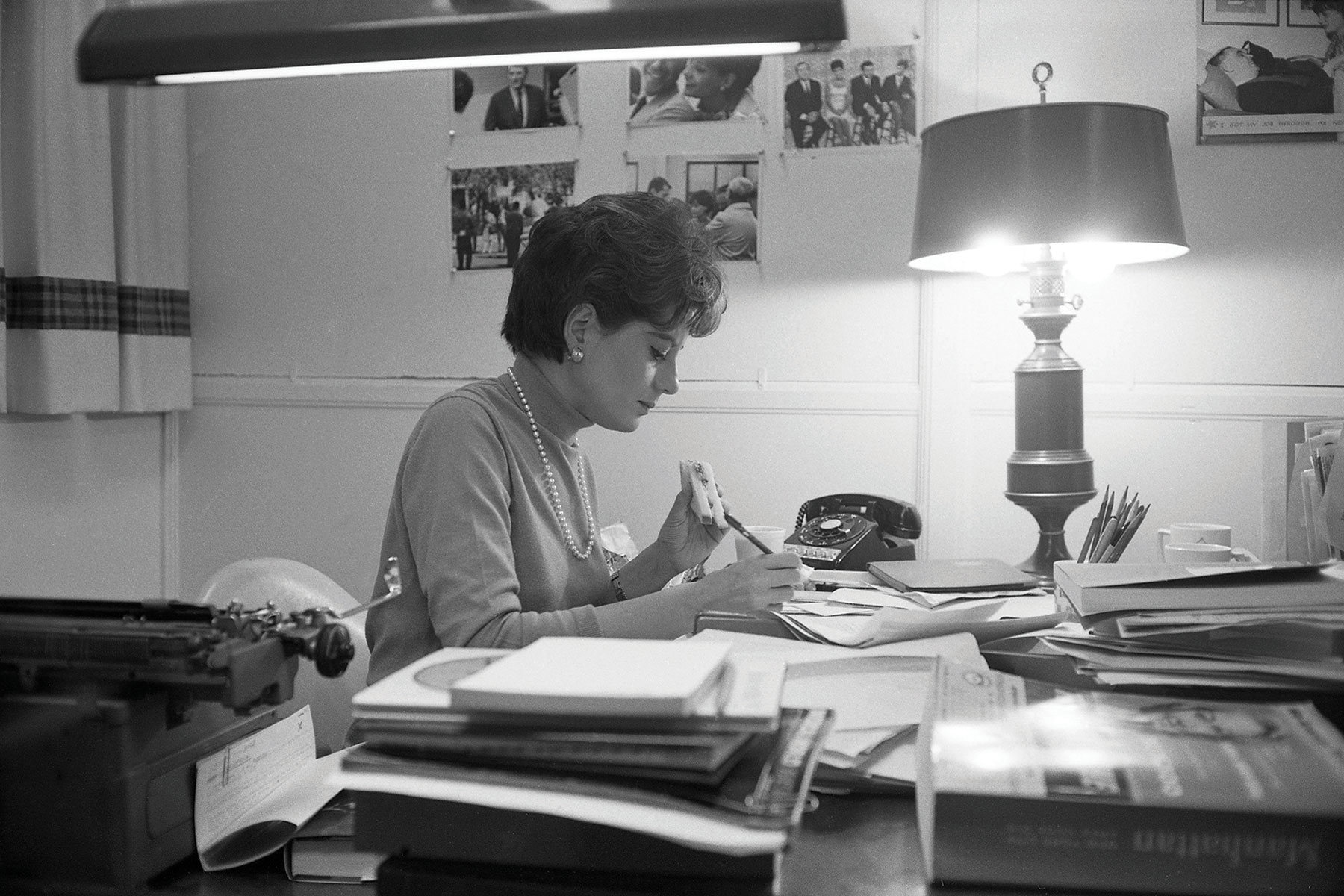 Barbara Walters, who would become one of 20th century television journalism’s most well-known faces, almost didn’t enter the field.

TV was in its infancy when she graduated from Sarah Lawrence College in 1951, and her personal background hardly pointed toward a career in the new medium. The daughter of theater impresario and nightclub owner Lou Walters, who created the highly successful Latin Quarter night clubs in New York City and Miami Beach, she grew up rubbing elbows with world-class entertainers. In her youth, she even contemplated trying her luck as an actress, landing an audition for the Broadway production of a Tennessee Williams play.

She backed out at the last minute.

“I knew then, in my heart, that I didn’t have the courage or the confidence to face being rejected, perhaps over and over,” Walters wrote in her 2008 autobiography, “Audition: A Memoir.” “I was forced to face the fact that I wasn’t going to be a great dramatic actress.”

Admitting to a fear of rejection seems out of character for a woman who spent the next few decades smashing through one glass ceiling after another in TV news, a male-dominated profession not at all comfortable with sharing the teleprompter with women. But during the course of her career, Walters would muscle her way into the profession’s top ranks, becoming (among a great many other things) the “Today” show’s first female co-host; the first female evening news anchor; and the medium’s premier interviewer, landing conversations with everyone from Fidel Castro to Richard Nixon.

“I didn’t start out waving a banner and saying, ‘I’m going to change things for women,’” she said. “But I think my work, my example, and some of the struggles I went through — and some of the terrible, terrible criticisms aimed at me — did change how women are perceived on television.”

Here’s a sampling of the major events from her professional life.

Graduating in 1951 from Sarah Lawrence College with a bachelor’s degree in English, Walter’s university career included leading roles in school productions of “Juno and the Paycock” and “Candida.” Walters briefly contemplated dropping out of school to take up acting.

Landing her first TV job in 1953 at WNBT (now WNBC), NBC’s New York City affiliate, she served as the assistant to the station’s director of publicity, promotion and advertising, and wrote most of the station’s press releases. She spiced up those releases by putting provocative facts or hot quotes in the lede — a strategy she continued later with her own celebrity TV interviews.

While still at WNBT in 1953, Walters produced her first TV show — a 15-minute children’s program called “Ask the Camera.” It was directed by future head of ABC News Roone Arledge. Her role in the program also earned her a brief mention in one of the first issues of TV Guide.

Later in 1953 she landed a writing job for the CBS program “The Morning Show.” It was created to go head-to-head with NBC’s “Today” show, which debuted three years earlier. During Walters’ tenure it was co-hosted by Walter Cronkite and, unexpectedly, Dick Van Dyke.

Walters covered her first hard news story in 1956 when, on behalf of CBS’s “The Morning Show,” she personally pre-interviewed survivors of the July 25 sinking of the Italian ocean liner Andrea Doria, persuading them to appear on the show the next day.

Walters was hired in 1961 as a writer and occasional on-air feature presenter for NBC’s “Today.” One of her earliest assignments was writing copy for the so-called Today Girl, a female presenter who only reported stories aimed at women. However, she was soon cleared to report “regular” stories, in addition to her Today Girl duties.

In 1967 Walters was named one of Harper’s Bazaar’s list of 100 Women of Accomplishment — an honor she would win again in 1971. Ladies Home Journal also named her one of its 75 Most Important Women in 1970, and Time listed her among its 200 Leaders of the Future in 1974.

Walters published the book “How to Talk with Practically Anybody About Practically Anything” in 1970. Partly a memoir, partly a primer to help shy people meet others, it was hugely successful. “Easily discernable among the froth and dropped names … is the fact that the author understands and is basically sympathetic to the needs and anxieties of others,” said bestselling author James Conaway in a critique of the book for The New York Times.

Walters began a five-year stint as host of “Not for Women Only” in 1971, which aired after “Today” and was syndicated across the country. Though doing two different shows every weekday morning was exhausting, Walters nevertheless persevered as host until 1976. The program utilized a panel of experts who talked about everything from sex to work, and served as the template for the talk show “The View,” which would debut more than two decades later.

In 1972, Walters — one of only three female journalists, and the only female broadcaster — joined the press corps that accompanied President Richard Nixon on his historic trip to China. “The China trip probably marked the seminal moment in which television assumed superiority as America’s primary source of news,” she wrote in “Audition: A Memoir.”

Walters was promoted to co-host of the “Today” show after the unexpected death of host Frank McGee in 1974. McGee had been hardnosed during their brief time working together previously, mandating that in any hard news interviews he conducted with Walters, he was to ask the first three questions before she could join in. “The real reason I became very aggressive in going after interviews is, if I got the interview myself, and I did it outside the studio, I could do it myself,” Walters said. Co-host Hugh Downs called her “the best thing that’s happened to this show in a long time.”

Walters won her first Daytime Entertainment Emmy Award for Best Host of a Talk Series in 1975.

Walters departed the “Today” show in June of 1976 and moved to ABC, where she co-anchored the “ABC Evening News” with Harry Reasoner, becoming the first woman to anchor an evening newscast. She received a then-unprecedented $1 million a year for her services. It was not a smooth transition. Reasoner objected vehemently and loudly to having her in the co-anchor chair, and she was treated with icy disdain during her last months at NBC. “Back in 1976 you could freely attack a woman for wanting to attempt to do a so-called man’s job, especially in the holier-than-thou men-only news departments,” Walters wrote in her autobiography. “Many people still believed that women were supposed to know their place — and stay in it.”

Also in 1976, Walters debuted the first in a long-running series of “Barbara Walters Specials.” The first edition, featuring President Jimmy Carter and First Lady Rosalynn Carter, helped cement her reputation as someone who could land the biggest names in politics and entertainment — and get them to reveal their emotional sides. “I sort of joke now and say that if one more person cries on a ‘Special,’ I’m going to cut it out of the interview,” Walters said. “Perhaps they become emotional because we do have time to sit back and go through childhood experiences and some of the things that have made them what they are. It’s not just come in, plug your movie and good-bye.”

“Saturday Night Live” cast member Gilda Radner started performing as Baba Wawa, an on-air caricature of Walters, in 1976. Coming as it did in the midst of Walters’ trying transition from NBC to ABC, the routine (which made fun of the newscaster’s minor speech impediment) wasn’t taken well by its subject. “Audiences found her mimicry of my pronunciation of L and R as W hysterically funny,” she wrote in her autobiography. “I found it extremely upsetting. I was feeling so down that I probably wouldn’t have found anything funny.” Walters met Radner years later, and the two parted friends.

In 1977 Walters interviewed Fidel Castro, who picked her up at her Havana hotel in a jeep and took her to see the Bay of Pigs. Later they conducted a five-hour interview. “After we finished the interview at one o’clock in the morning, Castro took us into his kitchen and made us grilled cheese sandwiches,” Walters told Vanity Fair.

In 1979 she joined the ABC news show “20/20” as a part-time correspondent. She was paired with Hugh Downs, with whom she’d worked during her time at the “Today” show.

Walters arranged a 1980 “20/20” interview with Richard Nixon — his first TV interview since resigning the presidency.

She was inducted into the Television Hall of Fame in 1989.

Walters’ 1995 interview with actor Christopher Reeve, who had recently been paralyzed by a horse riding accident, earned her the prestigious George Foster Peabody Award.

Walters debuted her own brainchild, a morning talk show called “The View” that featured the perspectives of five women (a panel that at various times has included reporter Lisa Ling, comic Joy Behar, Rosie O’Donnell and Whoopi Goldberg) and Walter herself. She also served as co-executive producer.

In 2000, Walters renewed her contact with “ABC News” for five years at a reported $12 million per year, making her the industry’s highest-paid news host.

In 2001, Walters became the first American reporter to interview Russian President Vladimir Putin. She asked him, among a great many other things, if he’d ever ordered anyone killed. He replied with “Nyet.”

Walters received the Lifetime Achievement Award at the 30th Annual News and Documentary Emmy Awards in 2009. “Barbara is one of a kind,” said Bill Small, chairman of the News and Documentary Emmy Awards, “a prime example of what journalists can achieve in television news. She remains one of the medium’s great interviewers and also an inspiration to women who, as a result of Barbara’s pioneering role, now work in every phase of broadcast journalism. When Barbara began her career, few women could expect to get ahead in news, but she did, with skill, intelligence and perseverance.”

She retired from “The View” on May 16, 2014, at age 84. “I don’t want to appear on another program,” she said during the last broadcast. “I want instead to sit in a sunny field and admire the gifted women, and OK, some men, too, who will be taking my place. I’ve had an amazing career beyond anything I could ever have imagined.” The ABC News building at 47 W. 66th Street in New York City was renamed The Barbara Walters Building, in her honor.

In 2015, Walters donated $15 million to her alma mater, Sarah Lawrence College, to help create the Barbara Walters Campus Center, which opened in 2019.

Sam Stall, formerly editor of Indianapolis Monthly, has won countless SPJ awards and authored or co-authored more than 20 books. He interviewed Les Zaitz for the 2020 Fellows of the Society issue of Quill.