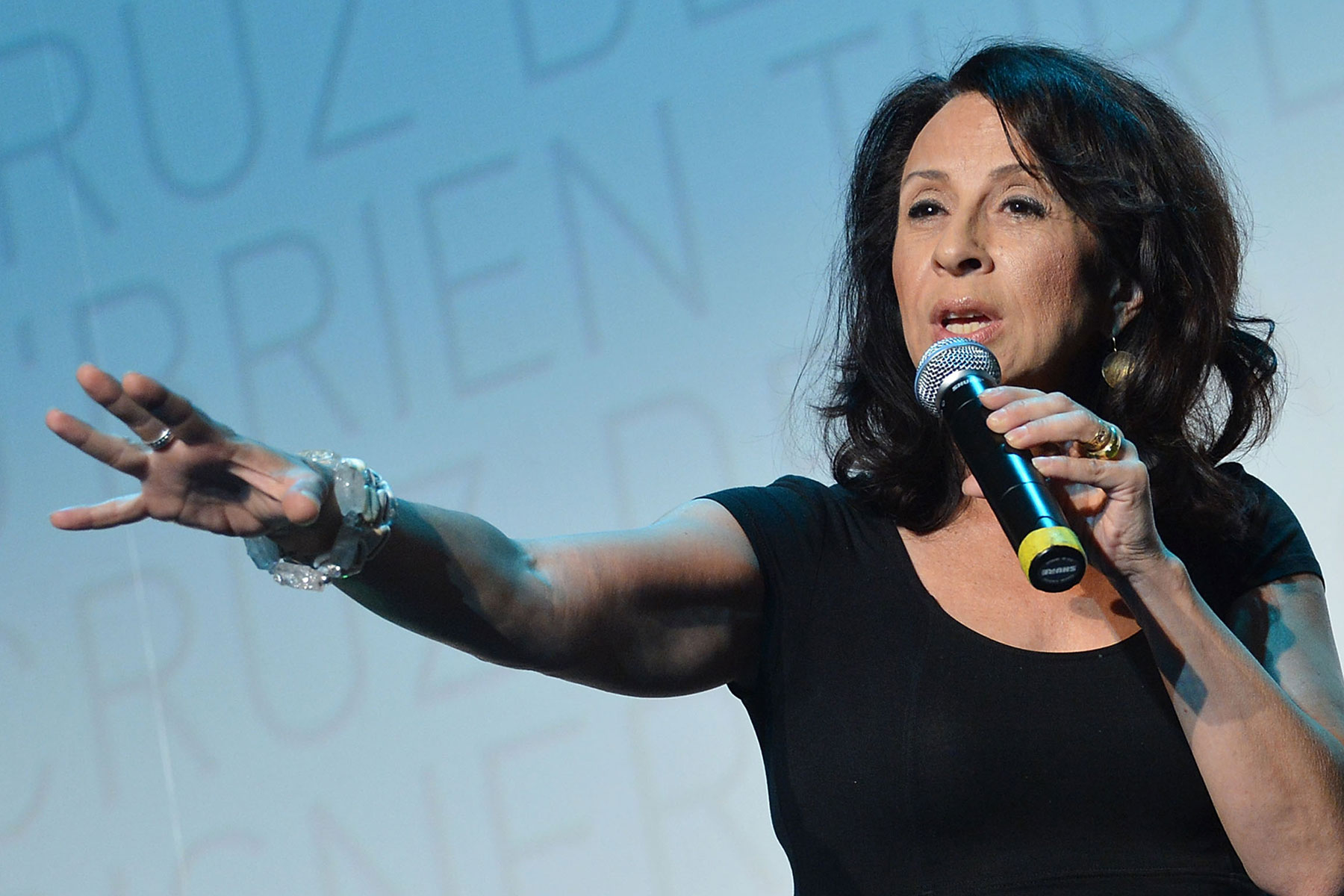 For almost four decades, Maria Hinojosa has shared the stories of marginalized communities through work that celebrates the diversity of the American experience.

In 1992, she helped launch the Peabody Award–winning “Latino USA” — one of the earliest public-radio shows devoted to Latino issues — and is its host and executive producer. In 2010, she launched nonprofit Futuro Media, which creates multimedia content for and about “the new American mainstream in the service of empowering people to navigate the complexities of an increasingly diverse and connected world.” In 2011, she became the first Latina to anchor a “FRONTLINE” report on PBS. Titled “Lost in Detention,” it’s an explosive documentary that exposed deportation and immigrant detention and abuse. And she co-hosts Futuro’s award-winning podcast, “In The Thick.”

Born in Mexico City and raised in Chicago, she worked for CNN’s New York City bureau for eight years; was senior correspondent for the PBS newsmagazine “Now”; is a contributor to “CBS Sunday Morning”; and is a frequent guest on MSNBC. In September of 2020, Simon and Schuster published her book “Once I Was You: A Memoir of Love and Hate in a Torn America,” which the San Francisco Chronicle hailed as “a testament to what great journalism can do — leverage privilege and power to tell the stories of those who are voiceless.”

What news events do you remember from childhood?

I remember mostly the images — the Civil Rights protests, the Vietnam War, Robert F. Kennedy and Martin Luther King being shot. We had a small TV in the kitchen, and watching the news was a central part of our lives. And the radio was always going. I understood that the media was important, a free press was important. But I never thought, “Oh, I’ll be a journalist.” There were few journalists of color on the air, and very few women at all. It never occurred to me as a career to consider. I wanted to be an actor! But there weren’t many actors, either, who looked like me.

When did the news-gathering bug strike?

When I started freshman year at Columbia, I wandered into the school’s radio station during orientation week — it was an excellent, award-winning station — and the staff took one look at me and said, “We need you.” They had a time slot designated for Latino music and needed a host. They were like, “We fought for this, we can’t lose it!” And I thought, “Okay, this is important — I have to be nice and say yes, because I have privilege, and this is my obligation as a Latina, so I’ll do it.” It was the first of what would be many times where I felt a responsibility to represent my culture in the media, because our stories were not being told. But I felt like an imposter, which I discuss at length in “When I Was You.” My college counselor had to convince me to apply for an internship at National Public Radio, even though by then I’d been on the air for three years. She said, “You have to go for it. You’re good enough.” I got the internship, and that changed everything for me. I found my voice, and began reporting stories from under-represented communities.

Early on, you made a conscious decision to pronounce your name on the air precisely the way it’s pronounced in Spanish. Few other media people were doing that at the time.

I remember exactly the conversation I had internally about whether I would even be allowed to use the specific pronunciation. I knew it would stand out, because accented names like mine were rarely being heard on the radio. I kept expecting somebody to tell me, “You can’t say your name like that on the air.” But it was time to own my space as a Latino-American journalist. I knew it would matter to Hispanic listeners to hear names like theirs, and it would also broaden the general public’s sense of whose stories are allowed to be told. That tiny decision was huge. I got a lot of appreciation and attention from Spanish-speaking listeners. But I also got hate mail from people saying, “Who do you think you are? Go back to wherever you’re from.” Oh, my gosh, there was a lot of hate.

Your very name is what brought former prison inmate Luis “Suave” Gonzalez into your life, which you chronicled in your seven-part podcast, “Suave.” Can you talk about that?

Suave was in a Pennsylvania prison serving a life sentence for a murder committed when he was 17. He liked to listen to NPR and heard my reporting and was impressed that a Latino person was telling stories from communities of color, pronouncing names and places in such a deliberate way. When the prison needed a speaker for one of their events, Suave asked them to invite me and I came. I was interested in prison reform and thought he would be a good inside source for reporting. We stayed in touch over the years. He let me record our phone conversations. And then his sentence came up for review when the Supreme Court made the decision that automatic life-without-parole sentences for juveniles are unconstitutional. He was ultimately released from Graterford [State Correctional Institution] in 2017. He’d never expected to leave prison. Suddenly, he was part of a very big story, and I had hours and hours of taped conversations with him to glean from to tell his story.

Is there any way you could have predicted, back when you met him in 1993, that those recorded conversations would one day figure so prominently in one of your productions?

Not specifically; I just trusted my instincts. As I tell journalism students all the time, you need to nurture your contacts, some of them over decades. You don’t know where they will lead. With Suave, I had been building a relationship with him for years. By the time the Supreme Court decision came down, he knew me and trusted me enough to tell his story.

How did the decision come about to become an American citizen?

During college and early in my career, I’d been traveling a lot to Cuba and Nicaragua. America was banning people from those countries, and I was very passionate about the injustice of it. And then I thought, “One day, after one of these trips, I’m gonna try to get back into this country, and when I fill out that form, they’re gonna be like, “Nope, your green card expired. Sorry.” It was a worry. Today, of course, people can hold dual citizenship in Mexico and America. But that wasn’t the case back then. I decided that I needed the security of being an American citizen.

How has becoming an American citizen impacted you?

After I became a citizen, my mission became more adamant, like “I’m gonna hold you more accountable than you ever expected. I’m going to take this very seriously. I have a voice, and I will to continue to raise it.” In my career, I’ve received a lot of awards. One that I love so much is the Outstanding American By Choice Award [which recognizes the commitment of naturalized citizens to the United States and their local communities], presented to me in 2009 by none other than the head of the Department of Homeland Security at the time, Janet Napolitano. The ceremony was on Ellis Island, and in my speech, I said, “Yeah, I did choose this country, which means I will not let it get by with bullshit.” I’ve become one of those people who will tell immigrants, “Become a citizen now.” And I can’t tell you the number of people who have thanked me. My hairstylist was one of them. She’s a Yemeni Isreali who had a green card for 30 years, and I was like, “Sweetie, you’ve got to do this. You never know which way the immigration politics are going to go in this country.” And then Trump got elected, and she got so scared of what might happen that she finally went for her citizenship. She is forever thankful that I pushed her.

What was the impetus behind creating your independent, nonprofit multimedia organization, Futuro Media?

The seed was planted back in 2000 when I looked at U.S. Census data showing that the Latino population in the U.S. — not including migrants — had grown by 43%. Yet we were not telling their stories in the mainstream. I was tired of being dependent on mainstream media outlets to tell these stories. I was tired of trying to convince them that they mattered. I wanted to create a place for a new mainstream to emerge, where deeply reported, nuanced stories tell the bigger story of America.

In 2011, your “FRONTLINE” special exposed immigration abuses. A decade later, Americans reeled at images of children being torn from their parents at the U.S. southern border. What do you make of this new “waking up” to the human-rights crisis at our borders?

We’ve known about the human-rights crisis at the border for years. I was on the phone with my son, crying in frustration when the latest family separations were confirmed, and he said, “But exposure of this is what you’ve been working towards your entire career — now everybody is talking about it.” And yet we just heard the vice president [Kamala Harris, at a news conference in Guatemala alongside Guatemalan President Alejandro Giammattei], tell people fleeing violence and corruption in Central America, “Do not come here.” I felt ill, just sick and wounded. These are not people looking for jobs in America. These are refugees running for their lives. I feel wounded and so angry with the situation since I took everyone inside the issue with that “FRONTLINE” piece. The dehumanization of immigrants is the sickness of our country. So I’m going to be digging deeper. I just got funded to create my own investigative unit into immigration and the madness in general. People have been saying to me, “Maria, you’re getting so strident,” but I’ve no patience for the politics. I understand them, but as somebody who’s been covering this since I was 25 years old, I’ve seen all of this before, and it does not bode well. Our prison population is dropping nationally, so the multibillion-dollar prison industry will no longer be able to feed off of mass incarceration. They need to make a profit, and we are going to fill the prisons with immigrants who are undocumented.

Lin-Manuel Miranda credits you with getting the word out to the Hispanic community to support his musical “In the Heights” in its early days of production. In the film version, you have a bit part as an activist. What was it like to come full circle in such a joyous way with such a culturally significant theater work?

Oh, it was just a very fun thing. When I was younger, I’d wanted to be an actor but found journalism instead. It has changed my life, amplifying voices that deserve to be heard. But I’ve never lost my love of film and theater. So being in the movie felt like, “I did it — I’m in a Hollywood film!” Even if it was a very small role. It was a joy.

What keeps you going?

Honestly, some days it’s really hard. I recently did “Find Your Roots” with Henry Louis Gates and learned I have ancestors in Spain, where the law allows people of Spanish descent to become citizens. And I think, “Maybe I need to get my European citizenship, because this country is frightening.” But then I remember the bravery of human-rights heroes like Frederick Douglass and Ida B. Wells, who basically said, “Do not silence yourself.” And I say, “No, I’m not done yet.”

Ronnie Polaneczky is an award-winning writer, columnist, and editor at The Philadelphia Inquirer, where she also created The UpSide, a positive- news section that celebrates the best of us — and the best within us. A TEDx speaker, she is an avid practitioner of “deliberate listening.”