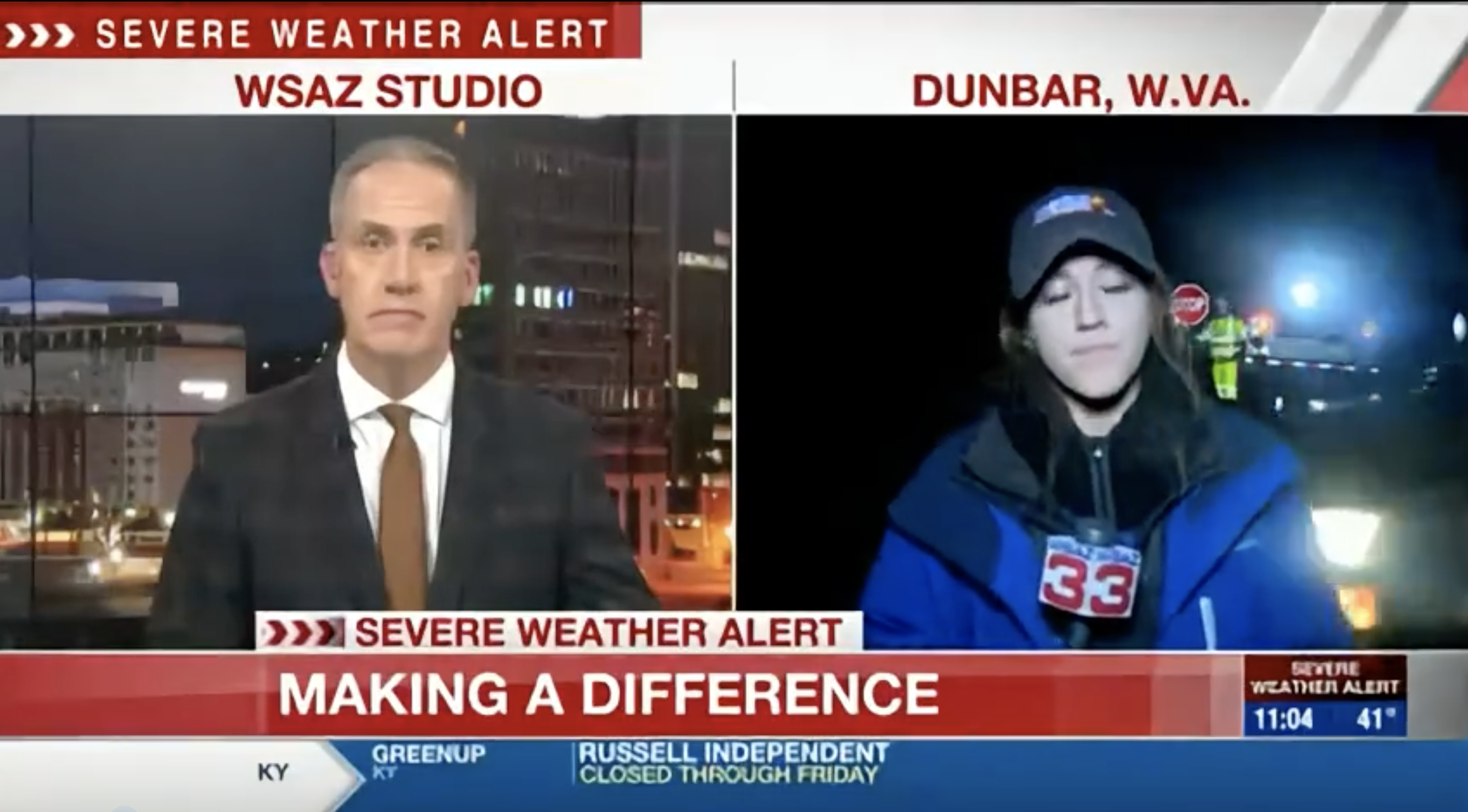 Accident brings attention to safety of lone journalists in the field

Then, at 11:04, just after anchor Tim Irr crossed back to Yorgey asking about the main break, a loud thud was heard and the camera fell to the ground. Yorgey had been hit by a car.

“That’s a first for you on TV Tori,” Irr replied.

Irr asked if Yorgey was okay and she replied: “We’re good Tim.” Later in her segment, Yorgey said her life flashed before her eyes.

Footage of that incident went viral and struck a nerve within the industry, with other local anchors and reporters discussing the footage.

The incident raised questions about the safety of journalists in the field alone.

Yorgey, now a reporter for ABC affiliate WTAE in Pittsburgh, did not respond to a request from Quill for an interview and Anna Baxter, WSAZ’s news director, did not respond to an email message seeking comment.  The Society of Professional Journalists national leadership, in conjunction with SPJ’s Georgia Pro Chapter, recently held a town hall on multimedia journalist safety, which can be viewed here.

To gauge industry response, Quill reached out to nine organizations that own the majority of local television stations in the U.S. — Nexstar Media Group, Tegna, Sinclair Broadcast Group, NBC Universal (which also owns the Spanish-language network Telemundo), ViacomCBS, Univision, Fox Corporation, Disney (which owns ABC) and the E.W. Scripps Company — to see if the footage impacted their policies regarding the safety of journalists at their stations.

Reached by email, Gary Weitman, chief communications officer for Nexstar, said while the company does not discuss specific security measures, the safety of its staff is the company’s number one priority at all times.

In an emailed statement, Anne Bentley, chief communications officer for Tegna, said the company’s head of safety and security had been conducting additional safety trainings in its newsrooms since the footage of Yorgey went viral, and the footage is being used to emphasize that no journalist should be sent out to cover a story alone.

“We have been sending this message to our newsrooms for years: There is no story, there is no shot, there is no video, no picture, no interview that is more important than the health and safety of our journalists,” Bentley said. “The message in these training[s] has been and continues to be that MSJs or photojournalists should never be assigned to cover a story or do a live shot alone in high risk situations.”

A spokesperson for Scripps did not respond prior to submission of this article to Quill editors. Spokespersons for NBC, Sinclair, Disney, Fox, CBS and Univision did not respond to Quill’s requests for comment.

Kylen Mills, a sports anchor and reporter at KRON, a MyNetworkTV affiliate in San Francisco, was saddened but wasn’t surprised to see a fellow reporter hurt. The mindset, she said, is that you’re lucky to have the job in spite of the competitive nature of the industry, and that the concerns surrounding safety, on top of other industry concerns, are scaring off younger journalists who wonder why they are bothering.

“You don’t feel like you have the right to speak up,” Mills said, adding that cultures in newsrooms need to change. “The message needs to be sent from the top down and the actions need to follow. You can’t go back to business as normal.”

Mills says that the responsibility for what happens next is with station leaders, who need to educate their newsrooms, outline change and take a clear stance.

“Safety needs to be the number one priority,” Mills said. “What will it take for a discussion to happen? At what point does the buck stop?”

Previous story
Eyes in the skies: Getting the most out of satellite data and images
Next story
10 with Apoorva Mandavilli