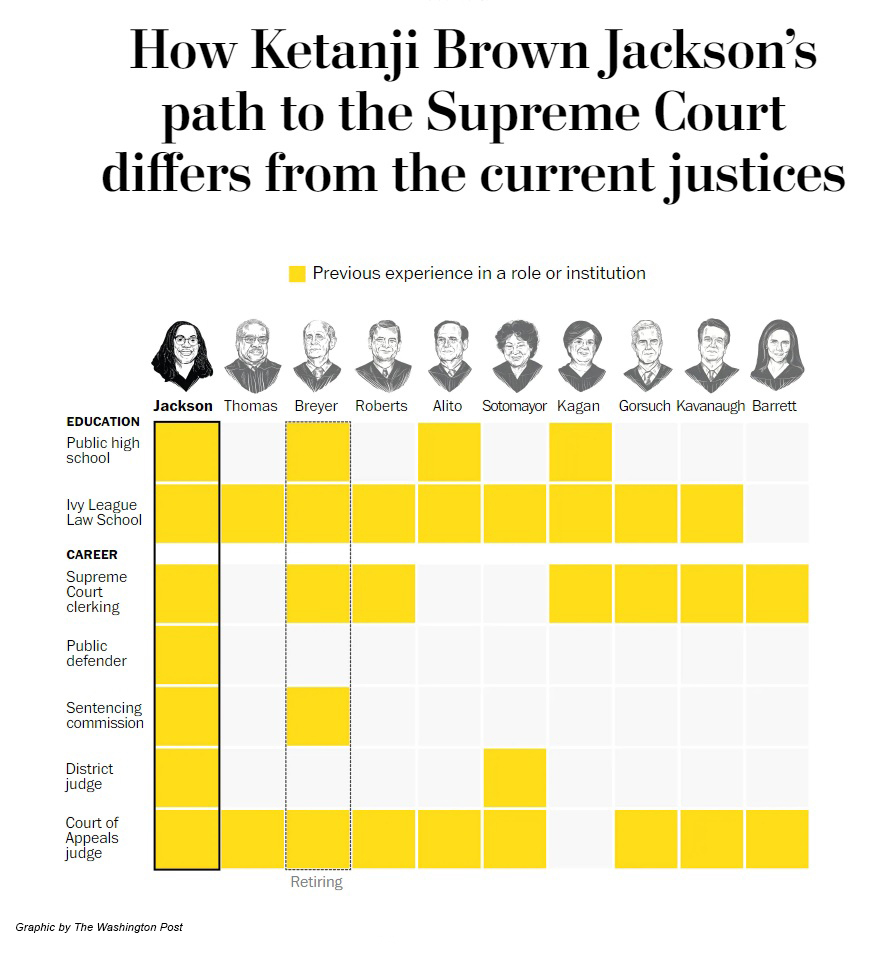 A Washington Post graphic comparing Supreme Court nominee Ketanji Brown Jackson’s experience with that of current justices has been widely shared on social media, sometimes without the headline that provides important context.

The chart ran online and in the newspaper with the headline, “How Ketanji Brown Jackson’s path to the Supreme Court differs from the current justices.” An accompanying story outlines details about her career and educational background and notes who on the court has similar experience and who does not. Without the headline or story for context, the graphic can be incorrectly interpreted as suggesting Jackson is more qualified than all nine sitting justices.

Some who posted the chart, perhaps unaware it once had a headline, made that argument.

“Judge Ketanji Brown Jackson is the most qualified person to ever be nominated to serve on the U.S. Supreme Court. Read that again,” says a post on U.S. Rep. Ayanna Pressley’s Twitter account that’s accompanied by the graphic.

The chart lists seven details from Jackson’s background, including her experience as a federal district judge and public defender as well as her public school education and Ivy League law school attendance. It shows how each current justice’s background aligns with Jackson’s.

The chart does not attempt to rank Jackson and the justices on criteria considered important to qualify for a high court seat.

“I’ve seen this everywhere. Can anyone explain how public high school or public defender are suddenly relevant or set a judge apart,” reads a comment posted to Reddit.

“They just picked qualifications that she had specifically and then compared others against it so that she’d have the most boxed checked. This is silly. All of those people are highly qualified and all of them have experience that the others don’t,” a poster responded.

Retiring Justice Stephen Breyer, whom Jackson would replace, comes closest to matching her experience in the seven areas identified in the chart. The experiences of Justices Clarence Thomas and Amy Coney Barrett matched Jackson’s the least.

Previous story
From the President: Communities make a difference
Next story
10 with Lars Willnat