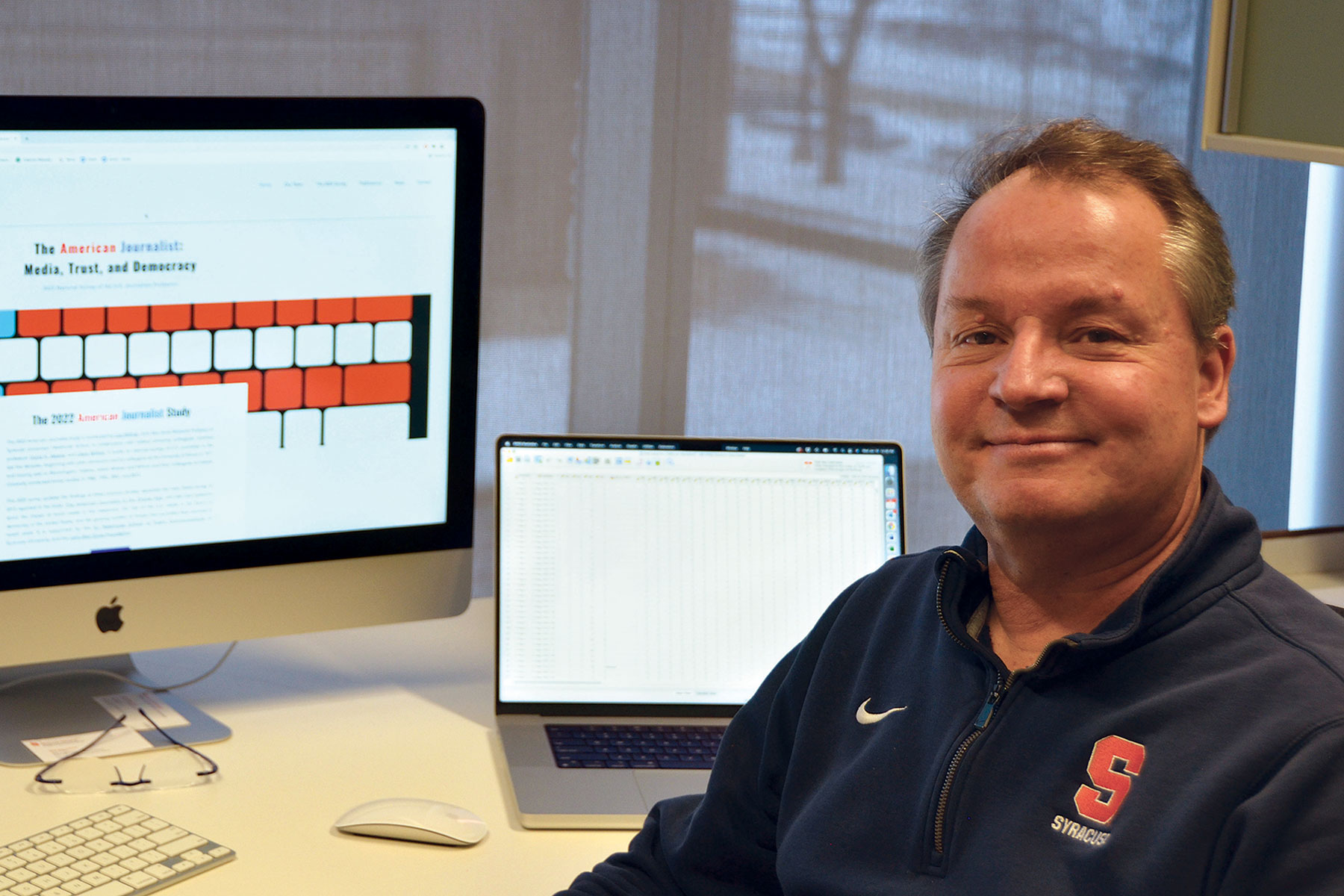 Every 10 years since 1982, researchers for “The American Journalist” survey a representative sample of journalists throughout the United States to understand who makes up the profession and their attitudes toward it.

Leading the survey this year is Lars Willnat, the John Ben Snow Endowed Research Professor in the Newhouse School of Public Communications at Syracuse University. He took over the study in 2013 after having worked with retired Indiana University professors David H. Weaver and Cleve Wilhoit on it while he was a student there.

The survey is set to close by the end of March, and the results will be published in a book, which will take about two years to write. Initial fi ndings, however, will be presented at the annual meeting of the International Communication Association, held in Paris in May. The $60,000 project is funded by the Newhouse School, Willnat’s chair and the John Ben Snow Foundation.

Willnat spoke with Quill about the history of the survey, what he’s observed and how it benefi ts the profession.

What types of questions do you ask?

Most of the questions that we asked are similar to the ones that we used previously. And they’re mostly about the demographics — typical demographics like age, gender, education, how long they’ve worked in this profession, what jobs — the typical kind of things you would ask a sample of journalists, and then the attitudes, the work conditions, mostly about job satisfaction — how happy are they in their jobs? How did they think about journalism, per se? Is it going down the hill? Or is it getting better? And as you can imagine, most people think it’s going downhill. It’s a lot of stress. And that shows in our surveys over the years.

How many questions is the survey?

It’s getting longer and longer. The initial survey was done by telephone, in the ’80s and ’90s, and it took 45 minutes. And we just couldn’t continue that in 2002 and further on, so we switched to an online survey. And as you know, people don’t like online surveys. Our survey is about 30 minutes long; we tested it, and it has about 80 questions.

How have the questions changed over the years?

Is there anything else new to this year’s version?

This is new in the latest wave of our survey: we’re looking at how people feel about threats coming toward them from the public, because everything has changed with [former President Donald] Trump. People have become more aggressive. So lots of journalists feel a threat. That’s a big theme in our survey. We are looking at diversity as well: how do they feel about diversity in their workplace and in their writing? And then we are also looking at the role of media and democracy and the future of democracy.

What trends have you seen?

Job satisfaction has gone down enormously. Journalists feel more stressed, overall. But in our open-ended questions, most of them said they love their jobs. [In the 2013 survey] people were really skeptical about the direction of journalism in this country. They were not happy about their jobs, with overall job satisfaction dropping over the years. But, at the same time, many of them said, “This is the best job I’ve ever had.” So the people in this field are really committed to being journalists. And it’s just amazing to see that despite all these stresses on the industry, especially in the past five years or so, that people are still committed to this and they’re still working hard and they’re still facing these threats and keep doing their jobs.

How many people were reached in the 2013 survey?

Around 1,200 journalists total. And we had about a 33-35 % response rate overall. That was an online survey. And this time we have a bit more money to make callbacks. This time we are targeting about 2,000 journalists. But this is why I’m not sleeping these days, because I’m worried that we won’t get the response rate, that people just don’t want to cooperate anymore.

We have a list of about 8,000 journalists, which is a representative sample of journalists. We drew these media organizations in proportion — more radio stations and television stations, fewer newspapers. The overall sample looks like the media overall in the United States. That hasn’t changed really, that procedure. What has changed in the sample itself is that we now have a list of native online journalists, which did not exist before. That’s a special group, I think. So we’re kind of looking at them separately. And we also have about 1,300 public broadcasting journalists we’re going to contact.

How do you ensure you’re reaching a diverse group of journalists?

Well, that should be built in. Because our sample is representative of the overall population of journalists.

With the recent push for more diversity in journalism, do you expect that to be visible in the results of this year’s survey?

The number of women in the profession has been consistently low over the 40 years we have been doing the survey. I’m hoping that we find more women in this profession than in the past surveys. I’m hoping that we find a more diverse group of journalists. I’m expecting that they become younger. I’m not sure. We have seen a growth in age, but I think that has kind of ended and we’re getting more and more younger people in our groups.

Because this is the only study that provides a representative look at U.S. journalism, and actually talks to journalists, I think this is really valuable. We can compare data across 40 years — we know how things are changing. And that’s important. Especially now, when everybody talks about journalists being depressed and threatened. This is a terrible thing for journalists. And they’re facing all these obstacles. It’s important to take the pulse and see how they feel. I see it really as a service to the industry, because I admire them for their work. It’s also a lot of fun to talk to them. We have local journalists who tell us what’s important, and we have these big anchors and celebrity journalists in our sample. So it’s exciting to collect data like that.

Zoë Berg is the communications specialist for the Society of Professional Journalists and the assistant editor of Quill.