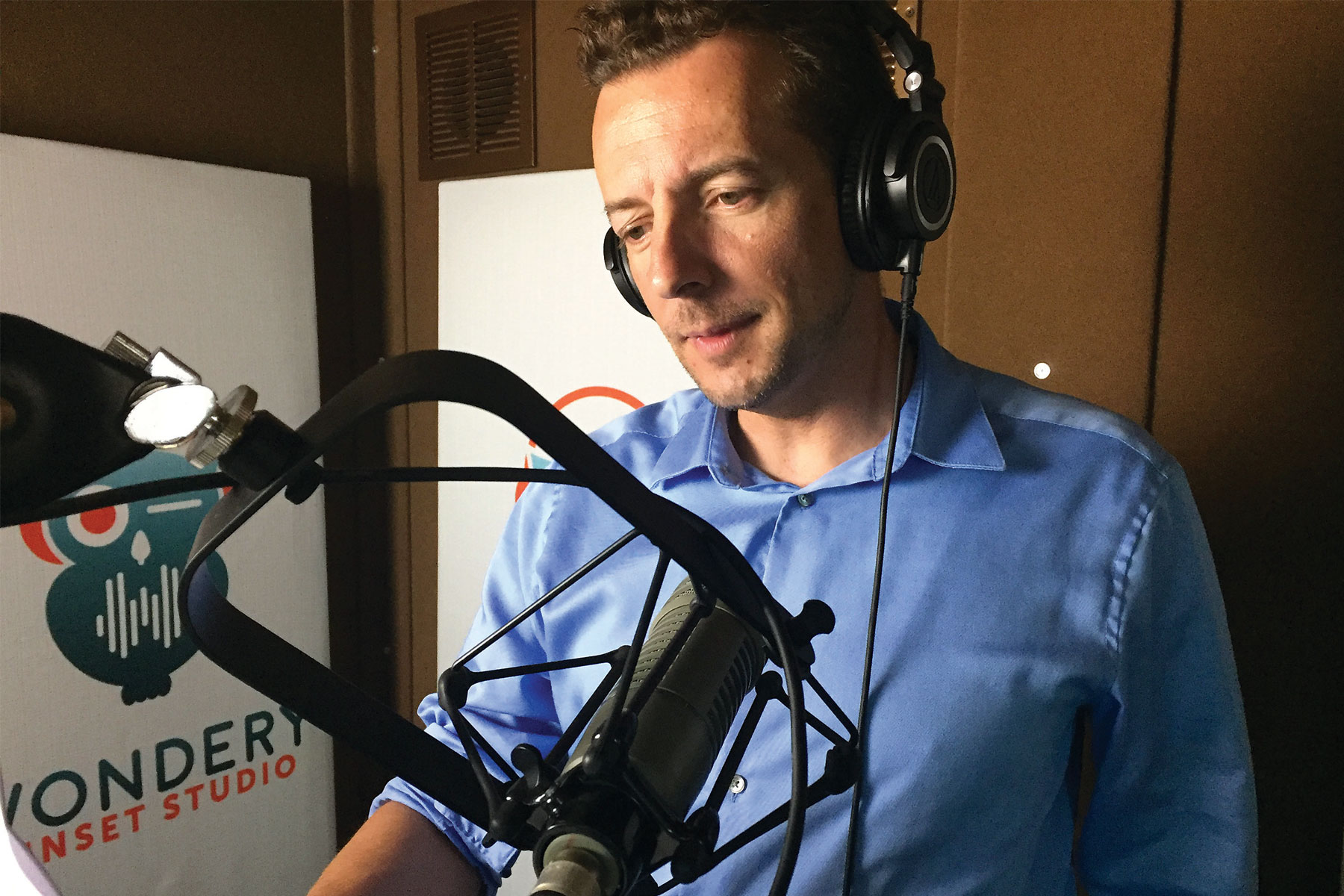 When Gabby Petito went missing in September, her story went viral. It was difficult to avoid the constant updates, timelines, theories circulating the internet and armchair detectives swapping “clues” to try and find the 22-year-old.

Social media users from old-school Facebook posters to true crime TikTok followers, and traditional news outlets, became deeply invested in this case. According to a tally done by The Washington Post, Petito was mentioned 398 times on Fox News, 346 times on CNN and 100 times on MSNBC in a seven-day period in September. Additional stories criticized the extensive coverage as a product of “missing white woman syndrome.” (“Why not the same media attention when people of color go missing?” asked MSNBC host Joy Reid, who pointed to the lack of people of color in the industry as a root cause of the problem.)

For many, given Petito’s identity, the broader context of domestic violence and the popularity and near obsession with true crime, her story was the perfect storm. And viewers, readers and listeners were hungry for it.

“If it bleeds, it leads” is an old journalism cliché. But clearly there’s still truth in it, perhaps now more than ever.

Crime reporting and the essence of true crime has been around for ages. Countless books, TV shows, movies and documentaries have captured the attention of audiences who are fascinated with these events and find entertainment in the stories.

Dating back to the 1500s, crime pamphlets and prints of trial accounts were commonly circulated in British cities. By the 18th and 19th centuries, newspapers dedicated a fair amount of space to cover murders, robberies and other crimes, and court proceedings.

Fast-forward to the mid-1900s: classic literature about crime stories, including “In Cold Blood” about the 1959 murders of four members of the Clutter family in Holcomb, Kansas, were bestsellers. During this time period there was also the rise of True Detective magazine, which brought a new lens to crime interests through its murder-mystery style writing. This likely laid the foundation for sensationalizing crime stories and is most similar to the true crime we see today. The term “serial killer” was also coined around this time in the U.S. in the 1970s, which speaks to the growing focus on understanding and investigating these individuals.

Unlike today where many investigations into crimes stem from holding the legal system accountable, programs of the late ’90s and early 2000s, including “America’s Most Wanted,” offered viewers an opportunity to get in on the action and help solve crimes from the perspective of law enforcement. Others of the newsmagazine genre, including “20/20” and “Dateline,” offer in-depth reporting on crimes, mysteries and tragedies that have become a regular part of American culture, as both these shows have been on the air for 30-plus years.

More recently, streaming platforms have opened a new door to capitalize on consumer interest in crime. These shows and documentaries parse through every detail of a crime, and range in perspectives from telling the stories of victims to getting inside the minds of killers. These include the Emmy- Award–winning series “Making a Murderer,” which was filmed over the course of a decade and explores the murder case against Steven Avery, and “Conversations with a Killer: The Ted Bundy Tapes.” And of course there are podcasts.

One of the major reasons why true crime might feel like it’s having a moment now is because its popularity is more measurable through links, clicks, downloads and streams, said Kelli Boling, an assistant professor at the University of Nebraska who studies audience reception to true crime podcasts. The intersection of the true crime genre and podcasts has also been part of that boom. The first season of the “Serial” podcast (2014), which focuses on the 1999 murder of Hae Min Lee and the case against her ex-boyfriend Adnan Syed who was charged with the murder, marks this turning point, Boling argues. Subsequent seasons tell the stories of Bowe Bergdahl, who was held captive by the Taliban for five years, and the Cleveland court system. It still holds the record as the most downloaded podcast of all time. Since then there’s been an explosion of true crime podcasts including “Dr. Death,” “Dirty John” and “Criminal.”

As of January, half of the top 10 podcasts on Apple’s chart were true crime listens. 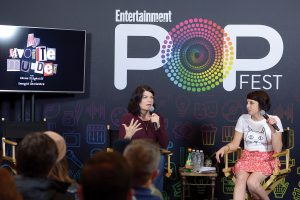 Some can comfortably be called journalism outlets. Others are more about entertainment. Two widely popular podcasts that fall into the latter category are “Crime Junkie” and “My Favorite Murder,” which retell crime stories by pulling material from various (sometimes questionable) sources, while the hosts share their personal theories and ponder details with their audiences.

Hosts Karen Kilgariff and Georgia Hardstark created the comedy-meets-true-crime podcast “My Favorite Murder” in 2016. Their formula for success: each episode, the hosts take turns recounting stories of murders like bedtime tales in combination with wry wit, wisecracks and general banter between friends about everything from sex to mental health. Their humorous approach to the most gruesome horrors in life has amassed a huge following, as 2020 data revealed the show gets 35 million downloads per month. Fans of the show, or as they call themselves, murderinos, literally buy-in through memberships, sold-out tours and merchandise to show their support. Although “Crime Junkie” takes a more straightforward approach, the formula is similar.

It’s no secret that the hosts of these shows are not journalists and do not pretend to be, but they do bear responsibility to be truthful about their sources, given their huge platforms. “Crime Junkie” was called out in 2019 for plagiarizing the work of journalists, TV shows and others, which resulted in more thorough source lists included and referenced in each episode. Host Ashley Flowers has also been criticized for her relationship with law enforcement, which has allowed her to get exclusive material while also giving officials a say in her content.

This is clearly different from the approach and purpose of true crime podcasts hosted by and based on the investigation of journalists. Boling noted that what distinguishes the journalists she has interviewed as part of her research from podcasts that repackage news for entertainment purposes, is the “so what” factor.

She points to Dave Cawley, who oversees KSL’s investigative broadcasting efforts and is host of the outlet’s “Cold” podcast, as an example. While Seasons One and Two focus on the stories of Susan Powell and Joyce Yost, the larger goal is to educate the audience on the prevalence of domestic violence.

Another example is the “In The Dark” podcast produced by American Public Media and hosted by investigative journalist Madeleine Baran. Her reporting helped overturn the wrongful conviction of Curtis Flowers, who was tried for murder six times and spent 23 years in jail.

“My research also shows that the audience doesn’t really know if something is being ethically produced,” Baran said, “and even more troublesome, they don’t necessarily care, because it’s a good story.”

Whether via traditional outlets or through new media, journalists have to carefully consider why it matters to tell these stories.

“We ought to be careful of the notion that we profit from the misery of others by capitalizing on these awful things,” said Al Tompkins, a journalist, author and senior faculty member for broadcast and online at The Poynter Institute. “We are peering into what is probably the worst moment of these people’s lives, sometimes years after the event. What is the traumatic cost of resurrecting these cases?” 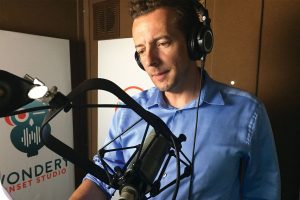 Christopher Goffard, host of “Dirty John,” is an author and a staff writer for the Los Angeles Times. (Photo by John Wondery)

Journalists need to make it clear why they are covering a story and why the audience should care, she added. Boling also recommends involving the victims’ families, because it is the right thing to do.

Keeping in mind the principles of the Society of Professional Journalists’ Code of Ethics to seek truth and report it, minimize harm, act independently and be accountable and transparent, are especially important. Being clear about why the story needs to be told and the value for the audience helps avoid potential pitfalls of sensationalizing and capitalizing on crime stories.

Still, avoiding sensationalism isn’t always easy. Charles Pekow, an independent journalist who has covered crime stories in the past (and whose byline appears elsewhere in this issue), advises reporters to set their biases aside. Due to social media and how fast news travels, a prevailing theory may come to light before reporters have analyzed the facts, he said, but don’t let that cloud your judgment.

Reflection is also key, said Joel Lambright, Jr., a multimedia journalist who focuses on the justice system. It’s always given him pause that lawyers advise their clients not to speak to journalists. “There has to be something in our institution for them to have that blanket advice,” he said. He encourages journalists to think about some of the negative stereotypes associated with reporters and what can be done to repair our reputations.

For Julia Fechter, a crime reporter for Dawson County News, it helps to keep in mind the mission of journalists to provide information, expose truths and hold officials accountable.

“Remember,” she said, “you’re ultimately there to serve.”

Carlett Spike is a New Jersey–based writer and editor with work published in Prevention and AARP, among others.