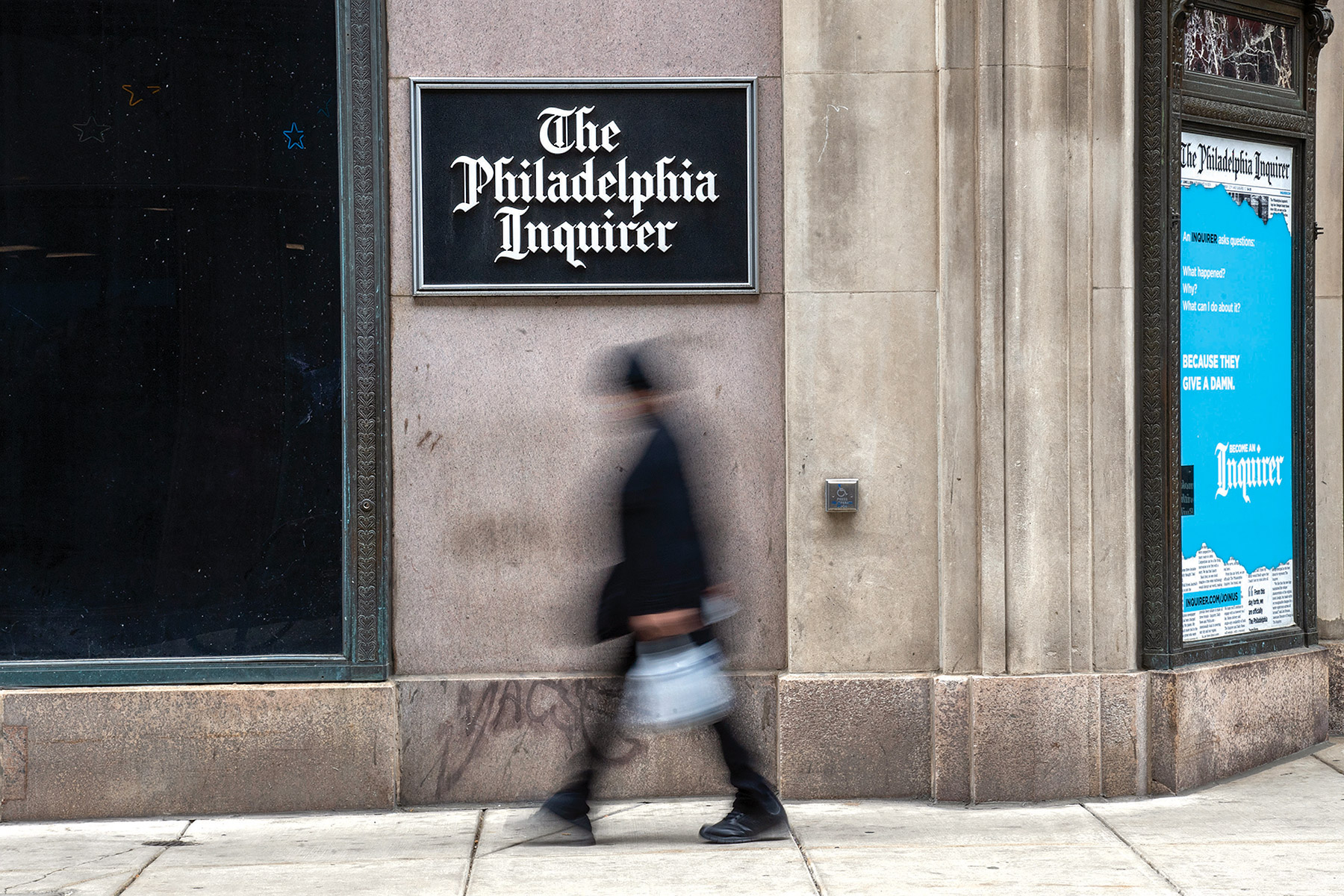 “Sorry” state: Should newspapers apologize for their pasts?

The News & Observer in Raleigh, North Carolina, partnered with white supremacists to intimidate black voters in the 1890s yet remains a respected newspaper today, writer Alexandria Neason noted in a story last year.

“Americans have short memories; we don’t like to be reminded of our many sins, so instead we prop up lofty narratives of progress and unity that obscure the violence enacted along the way,” Neason wrote for the Columbia Journalism Review.

The News & Observer is far from alone.

Some of America’s oldest and most respected newspapers spent decades — a century or more for some — publishing stories intended to create and perpetuate a view among white people that Black people were inferior and dangerous, unworthy of full participation in society.

The papers profited from ads sold to slaveholders who had humans for sale or rewards for the capture and return of those who had escaped. They ran editorials that supported slavery, used derogatory terms to refer to Black people and reported on lynchings in lurid detail.

In 1914, The Times-Picayune in New Orleans published a story about a Black murder suspect who had been tied to the back of a car and dragged to his death, according to research conducted by Channing Gerard Joseph. The headline read like a command to readers: “Tie Negro to Auto, Then Throw on Speed.”

Joseph, a historian, educator and journalist, explored the racist history of American newspapers and wrote about it last year in a story for The Nation. At the time, a handful had apologized, including the Los Angeles Times and Kansas City Star. At least two more joined them this year — The Baltimore Sun and Philadelphia Inquirer. Joseph focused his research on newspapers partly because “the most numerous and egregious examples” were in print publications.

The introspectives and apologies were widely viewed as commendable for their depth and honesty. But readers, Black residents and many others want to know what happens next.

“I applaud The Baltimore Sun first for its deep introspective exercise. However, in this period of social justice, such inwardlooking examinations are expected,” a person identified as Angela Harris wrote to the newspaper. “Naturally, it raises questions around its sincerity and motivation. Is this a performative exercise to get in front of the inevitable call for accountability? Is this a genuine pivot toward taking corrective action to effect real change?”

“And this newspaper, which grew prosperous and powerful in the years leading up to the Civil War and beyond, reinforced policies and practices that treated African Americans as lesser than their white counterparts — restricting their prospects, silencing their voices, ignoring their stories and erasing their humanity.”

The newspaper gave details. Among them:

“We are deeply ashamed and profoundly sorry,” the editorial board wrote.

The paper pledged to find and report stories of underserved groups and to do so with nuance and sensitivity, identify diverse sources with a variety of backgrounds, create a diverse talent pipeline and conduct diversity and bias education for the staff.

“On race, The Sun’s history is one we’re not proud to share, and we should warn you that it’s offensive to read,” the editorial board wrote. “But addressing one’s wrongs begins by acknowledging them.” 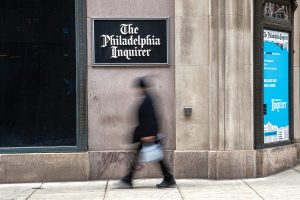 The Philadelphia Inquirer Building is shown May 24, 2021. That week marked the first anniversary of the paper’s problematic headline “Buildings Matter, Too.” Publisher
Elizabeth H. Hughes published a story on what the paper had done since then to transform its newsroom. (Photo by Jose F. Moreno)

The Philadelphia Inquirer took a different approach. It hired Pulitzer Prizewinning journalist Wesley Lowery to go through its archive and interview current and former employees and others in the city as part of a yearlong project called “A More Perfect Union.”

The first installment of the project was a 6,400-word dive into the newspaper’s culture, including its ugly history with Black journalists at the newspaper and bumbling efforts to diversify the staff. (Future installments will show how the paper’s coverage helped maintain discriminatory practices at other Philadelphia institutions, Lowery wrote.)

The following day, Inquirer Publisher and CEO Elizabeth H. Hughes apologized “to the Black residents and communities of Philadelphia, to the Black journalists of The Inquirer past and present, and to other communities and people whom we have also neglected or harmed.”

Maida Odom, who joined the paper in 1978, was shocked to see her editor’s byline on a story she had pitched and written about a Marian Anderson performance. In her furious search to find out how it happened, she was told the copy desk assumed her editor had rewritten the story, Lowery reported. An editor described her anger over a different incident as “Aunt Jemima goes to war,” Lowery wrote.

The newspaper hired Cynthia Tucker in 1980 to work in a suburban bureau, but she had dreams of one day writing about people and issues in faraway lands as an international correspondent. The newspaper had such positions at the time, but her editors gave no consideration to her aspiration.

Tucker quit after two years to work as a freelance writer in Africa. When she returned to the States, she got a job at the Atlanta Journal-Constitution, where she eventually became editorial page editor. She won the 2007 Pulitzer Prize in commentary “for her courageous, clear-headed columns that evince a strong sense of morality and persuasive knowledge of the community,” according to the Pulitzer Board.

“If I had thought that The Inquirer was taking the aspirations of any Black reporter seriously, I might have stayed,” Tucker told Lowery. “It didn’t seem like there was a future there for you.”

The story also put much attention on an insensitive — some say racist — headline on a column by the architecture critic lamenting the destruction of buildings in Philadelphia during the aftermath of the killing of a Black man, George Floyd, by white police officers in Minneapolis: “Buildings Matter, Too.” Staff members complained about it the next day in a two-hour session, and editors published an apology.

No one inside the Philadelphia Inquirer was involved in Lowery’s story, and the top editors say they saw it for the first time after it was published. Neither Lowery nor the editor on the project, Errin Haines, are Inquirer employees. However, Haines, editor at large at The 19th, serves on the board of The Lenfest Institute, the nonprofit that owns The Inquirer and one of the funders of the project.

Hughes said The Inquirer started making changes months before Lowery’s story published, including a commitment two years earlier to become an anti-racist institution. It developed an anti-racism workflow that raises specific questions at various stages of producing a story.

She said among other changes are the establishment of a Community News Desk to address how the newspaper portrays Philadelphia communities, staff training on recognizing and avoiding cultural bias and specific diversity goals with an emphasis on hiring, promotions and representation in leadership.

“In the end we should be judged by what we do and not what we have promised to do,” Hughes said in a message to readers. “Just as journalists hold institutions accountable, our audience should also hold us accountable.”

The Kansas City Star made its apology about seven months after Floyd’s death, admitting it “disenfranchised, ignored and scorned generations of Black Kansas Citians,” wrote Mike Fannin, the newspaper’s president and editor. “It reinforced Jim Crow laws and redlining. Decade after early decade it robbed an entire community of opportunity, dignity, justice and recognition.”

The Star’s six-part project started with a suggestion by a Black longtime reporter at the paper, Mará Rose Williams, who said it was important to get buy-in from the entire staff, which she said she did. Fannin said reporters searched court documents, archival collections, congressional testimony, minutes of meetings and digital databases. 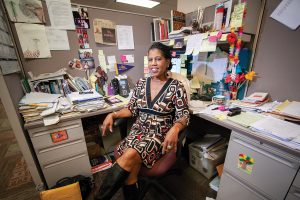 Mará Rose Williams, education reporter at The Kansas City Star. The Star’s six-part project looking into its racist history started with a suggestion by Williams. (Photo by
Paul Andrews)

“Reporters were frequently sickened by what they found — decades of coverage that depicted Black Kansas Citians as criminals living in a crime-laden world,” Fannin wrote. “They felt shame at what was missing: the achievements, aspirations and milestones of an entire population routinely overlooked, as if Black people were invisible.”

Reporters also compared The Star’s coverage of some critical events to coverage of the same events in the local Black press, and The Star came up short on stories important to the Black community. It was a disservice to Black residents, and it deprived white readers an opportunity to see “the true richness Black citizens brought to Kansas City,” Fannin wrote.

When heavy rainfall spawned a deadly flood in Kansas City 45 years ago, The Star’s coverage focused on damage to an upscale shopping and entertainment district and homes and businesses in the suburbs. Black residents were killed and displaced, too, but you had to read the Black-owned Kansas City Call to find stories about their suffering and grief.

Williams, an education reporter at The Star, said the newspaper has made several changes in the year and a half since Fannin made the apology, and residents have noticed. Far more stories feature the voices of people of color and LGBTQ residents, and many of them originate from more interactions between Star journalists and residents, she said. The newspaper will continue to look for ways to reach marginalized groups and produce stories with nuance and sensitivity, Williams added.

“One of the things that we committed to amongst ourselves, even before we began work on the project, was that this could not be a one-off, it could not be performative,” Williams said. “It could not be just saying, ‘Hey, we’re sorry.’ We had to incorporate what we were apologizing for into our daily journalism, in every aspect.”

Changes at the newspaper include:

“We’re stretching out our arms and asking the community to help us do the right thing in the right way. So, if that’s not significant and impactful, I really don’t know what is,” Williams said in a video discussion about the project.

In his Nation piece, Joseph calls on all American news organizations to “investigate, acknowledge, apologize and make amends for their role in disseminating racist ideas and profiting from racist violence.”

That, of course, will not happen. But The Sun and Inquirer will not be the last to follow this path. Companies that choose to apologize should do so with sincerity and follow up with remedies proportional to the scale of their offenses. Readers will let them know if their actions represent true atonement.

Rod Hicks is director of ethics and diversity for the Society of Professional Journalists. Follow him on Twitter @rodhicks.