Newspapers face existential threats these days, but none have it tougher than small town papers. Like their big-city brethren, they’re fighting 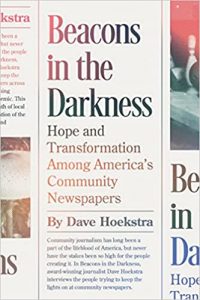 everything from plummeting advertising revenue to readership declines to the onslaught of fake news — all on shoestring budgets and with minuscule staffs. Dave Hoekstra takes a look at some of them in his new book, “Beacons in the Darkness: Hope and Transformation Among America’s Community Newspapers.”

As the title suggests, the book is not an elegy for a dying profession, but rather a celebration of its resilience. Hoekstra traversed the nation, profiling newspapers that have been locally owned for generations, asking how they manage to keep the lights on when so many other media outlets have either folded or sold out to big companies, and what innovative approaches they’ve used to stay afloat.

I’ve written several books, and the theme that runs through all of them is the importance of a sense of place and community. Especially today, understanding that sense of community seems really important to understanding different communities and what makes people tick. I came up with the initial idea about four years ago. I wanted to do a bit of a “Friday Night Lights”-type story about a small town newspaper in Hillsboro, Illinois, about 75 miles north of St. Louis. I wanted to tie in how the newspaper, the Hillsboro Journal-News, interacts with all the different aspects of the community, including the police, the church, the football team, stuff like that. After that we just took the idea and expanded it into a book. I spoke to newspaper owners from places ranging from Miami to Charleston, South Carolina, and found lots of great stories. They’re all family papers with multigenerational ownership.

What are some of the more unorthodox techniques your small town papers use to survive?

I wrote about a newspaper in Marfa, Texas, called The Big Bend Sentinel, which is owned by a young couple from Brooklyn, [New York,] who moved to Texas to purchase and run the paper. Well, their newspaper office also houses a coffee and cocktail bar called The Sentinel. In one place you can buy a newspaper, talk about a news event and get a cup of coffee or a drink. They even book the space for weddings. This might seem a little bit “out there,” but there are plenty of other ways to become a stronger part of the community.

Does every one of the newspapers you profiled have a “secret sauce” for survival, or are they just holding on with more determination than most?

I think it’s a commitment to the family legacy. We talked about how some papers are going into the nonprofit model, and a lot of these small town, independent family papers don’t buy into that. They say it’s not for them. I think there’s a certain sense, especially in rural America, that you have to pull yourself up by your own bootstraps.

So the pride in a family legacy helps keep the management motivated, but what other practical steps have they taken to boost the bottom line?

I’d say the thing many of them have in common, and something that’s definitely transferable to other small town papers, is to literally try anything that looks like it might aid their survival. Just throw things at the wall and see what sticks. When you’re in a dying business, you should be open to ideas of all kinds. A lot of them may fail, but you’ve got to try. You can’t just sit there. I understand that when you’re owned by a corporation and you have stockholders, you might be scared to do something radical. But with these papers, that’s not the case. That’s why, for small operations like them, staying independent is the way to go. I really believe that.

Still, would you say that most important thing is to be a linchpin of the community and offer readers something (like hyperlocal news) that they just can’t get anywhere else?

Just being deeply embedded in your community might actually be its own survival strategy for small town papers. The more intimately you’re woven into the social fabric, the more essential you’ll seem to readers. That’s why it’s so important for these local papers to keep track of things like local weddings, birth announcements, even Little League game scores. It’s how a newspaper becomes a valued member of the community. I remember the publisher of the Hillsboro Journal-News telling me that the signs of a healthy town are a good bank and a good newspaper.

Are all of the newspapers you profiled in the book still in business today?

There was one in Madison, Indiana, that was apparently the second-oldest family-run newspaper in America. The Madison Courier was founded in 1849 and was owned by the Garber family for six generations. And it was sold while I was doing the book. The owner had some health issues and some family issues as well. But I think everyone else I profiled is still in business. I kept monitoring them right through the fact-checking process.

What happens to a small-town, family-owned paper when an outside company takes over?

I think the small town readers definitely care, though they sometimes don’t realize what they had, and why it mattered, until after the fact. A lot of companies will purchase newspapers in the same area and consolidate their newsrooms and production facilities. It saves money, but the papers and the people who run them become strangers in the tightly knit towns they’re supposed to serve. And trust really does diminish. They lose that sense of credibility. And of course they lose what is the thesis of my book, a sense of community.

So who’s your target audience for this book? Who would benefit from reading it?

Well, I told the promotions people to try to get us in the AARP magazine because old people love newspapers. But seriously, though I don’t want to sound too optimistic, I would love for my target market to be young people, and people who are interested in the truth of journalism, and what goes into making a good journalist and good, truthful stories. With the type of bullshit that’s coming out nowadays, you really should know where your news is coming from. To understand what these small town publishers have done, and how they’ve done it, is important for anyone of any age to understand. These days, when you get your news off the Internet, you don’t know where it comes from or who’s writing it — let alone if it’s even true. But if you’re a small town paper embedded in your community, you’re accountable. People see who you are, can speak to you and they don’t have to wonder where the news is coming from. There’s a responsibility for the consumer to take time to learn things like this, and to pay for that quality news.

Sam Stall has written dozens of books and hundreds of articles, including an interview with Les Zaitz for the Fall 2020 issue of Quill.