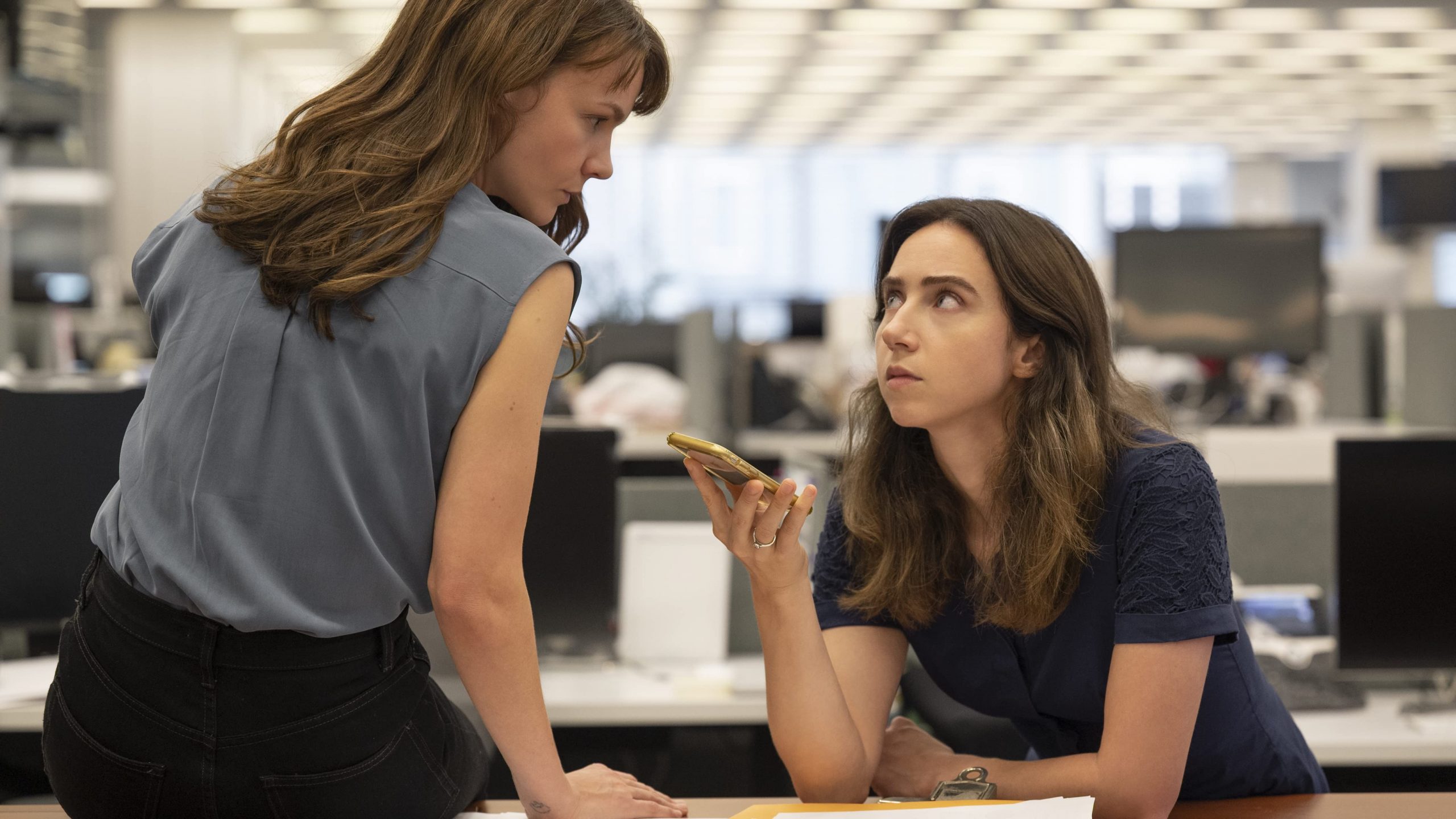 We’ve added ten more films to our growing Journalism Movies Ranked list, including the just-released “She Said” and such old-school eyebrow-raisers as “Francis Covers the Big Town.”

The list now names and reviews 160 flicks. To find out where these rank on our list, visit here. And look for more in coming months. Two hundred, we’ve got our eye on you.

Here are the latest additions:

She Said (2022). Films that fictionalize factual tales will forever face the question: Would a documentary better serve the story? The answer is almost always “yes,” and She Said, which chronicles The New York Times’ exposure of film mogul Harvey Weinstein’s pattern of rape and sexual assault, is not the exception to prove the rule. But there’s a thornier question at its center: If nothing has fundamentally changed about how women are treated in Hollywood circles, what exactly is She Said celebrating by dint of existing? It regards the Publish button like a pressed trigger on a package of C4. But what monolith of male misdeeds did Jodi Kantor (Zoe Kazan) and Megan Twohey (Carey Mulligan) topple, exactly? Director Maria Schrader achieves decent propulsion during discussions and dissections of when and how to publish their work. Even though the ensemble (including Andre Braugher as Dean Baquet and Patricia Clarkson as Rebecca Corbett) pales next to the powerhouses on this list, a certain camaraderie sparks to life late. (Be still my heart, there is even a shot of the copy editor deleting an extra space near a comma.) But She Said largely amounts to a slow, steady parade of real women’s words spoken by talented character actresses — taking its title quite literally as a talky, traditional just-the-facts drama. It’s not bad. It’s just not much more than you’d get from reading the existing coverage. (NR)

Vengeance (2022) John Mayer hits the list, not as a journalist but as a wingman to New York writer / podcaster Ben Manalowitz (director, screenwriter and star B.J. Novak, of the U.S. The Office). Ben has a New Yorker gig and “the verified check mark” (simpler times of summer 2022) but unexpectedly finds himself deep in the heart of Texas. He travels there after the death of a woman he’d hooked up with a few times — an opioid overdose her family is convinced is more sinister. Naturally, he pitches a new “existential crime story” podcast called Dead White Girl. Confronting the inherently messy moral minefield of true-crime podcasting, that podcast title is among few sharp punchlines here. Credit to Novak for smashing some unlikely genres together and in service of a treatise on how malleable, easily manipulated facts in a modern news cycle let lousy people off the hook. But the mystery too often recedes for fish-out-of-water gags that feel like a film version of those voters-in-the-heartland articles, and its left-field climax clangs pretty hard as Ben just finds out there’s no such thing as the real world, just a lie we have to rise above. (NR)

City of Lies (2018) City of Lies dramatizes the investigation conducted by former LAPD detective Russell Poole (Johnny Depp) into the unsolved murder of rapper the Notorious B.I.G. Poole’s theory followed that corrupt police officers helped with the crime, and his investigation into the LAPD’s involvement led to an early forced retirement. The film tells the story in a perplexingly non-chronological style, with flashbacks to the investigation that ended Poole’s career and a present-day story featuring Poole and investigative reporter Darius “Jack” Johnson (Forest Whitaker) teaming up to discover the truth. The film was shelved in 2018 due to Depp’s legal and personal woes, finally finding a VOD release during the COVID-19 pandemic. Ironically, it’s one of Depp’s more measured performances from that era of his career — which isn’t to say he’s especially good in it, particularly his delivery of one of the most unenthusiastic voiceovers ever recorded. A confusing, confounding mess. (ED)

The Shrine (2010) There comes a time in every reporter’s career when they simply can’t resist the urge to investigate a ritualistic cult in a small Polish village, and 2010’s The Shrine is one of the few movies on this list to really explore that journalistic phenomenon in depth. Even if you can overlook the wall-to-wall shoddy acting, this is a rather limp Evil Dead knockoff with some passable practical effects and a story that revolves around a thuddingly obvious central mystery. However, if you want to see a movie whose third act is mostly a bunch of Abercrombie models running around in monastery robes, this might be your best bet. (MR)

Francis Covers the Big Town (1953) Journalists need sources. In movies they’re usually cops, criminals or spurned wives. It doesn’t matter as long as the information is flowing, right? So what about a talking mule? Francis Covers the Big Town was the fourth adventure of the titular talking Army mule and his human pal, Peter (Donald O’Connor), who spent most of the 1950s falling into silly situations together. This time around, Peter brings his four-legged pal to the Big Apple in hopes of finding civilian work as at a newspaper. He hopes to land a few big stories and end up becoming part of the newsroom. Soon enough, they find themselves in heaps of trouble. Francis Covers the Big Town is silly for what it is, mixing Francis with pretty standard newspaper-drama fare and, among fans of this series, seems to be one of the more well-regarded entries. (ED) 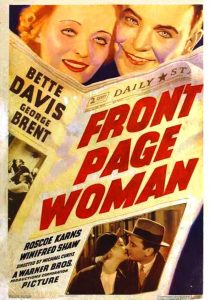 Front Page Woman (1935) Bette Davis and George Brent are rival reporters racing to scoop each other on the salacious murder of a Broadway producer. Being the era it was, they strike a bet in which the wager is Davis’s romantic affection. There’s plenty of snappy patter, Davis brings her signature vulpine physicality, and the hijinks culminate in a slightly amusing “Dewey Defeats Truman” moment. But there are long segments where Davis, easily the main attraction, is scooted to the side in favor of Brent chasing clues, and in regard to the incredibly voluminous sexism, what a difference five years would make between this and His Girl Friday (NR)

Each Dawn I Die (1939) James Cagney stars as Frank Ross, a newspaper reporter on the trail of a corrupt district attorney, Jesse Hanley (Thurston Hall). Hanley tires of Ross’s inquisitive nature and frames him in one of the most unnecessarily elaborate schemes put to the silver screen. Soon enough, our hero is stuck behind bars for the next two decades. His journalistic skills come in handy, and he befriends several inmates, including gangster “Hood” Stacy (George Raft). They set out to clear Ross’s name against all odds. The film is predominantly a prison drama, with the newspaper stuff only tangentially related to the plot, which ends in a shockingly violent prison riot. It’s an entertaining yarn with a great title. (ED)

The Independent (2022) Remember well-cast, agreeably junky potboilers that pushed off in a thousand theaters? Such films largely sink on streaming today, and so it goes with Peacock’s The Independent, released this month with zero fanfare. The perfect pick for a Dwayne Johnson proxy, John Cena plays a decathlete turned party-free presidential candidate whose rise threatens the front-running female Republican (Ann Dowd). Brian Cox and Jodie Turner-Smith are, respectively, a lionized political columnist and a disgraced reporter at a freshly sold newspaper chasing a state-lottery scandal poised to doom one of the candidates. Even amid a fundamental misunderstanding of editorial chain of command and a visual aesthetic that looks like those movies the Daily Wire funds, The Independent boasts a compelling conceit and a cast that carries things … for about an hour, until one big secret is revealed with a simple Google search, many melodramatic subplots converge in clumsy ways, and the conclusion connotes more of a crusading victory for the reporters than seems possible. To go back to what you might find on streaming, consider it Duplex of Cards. (NR)

Profile (2021). Through his production company, Bazelevs, filmmaker Timur Bekmambetov helped pioneer the “screenlife” format, in which events play out entirely in cyberspace, captured on computers, tablets, smartphones, etc. After producing the screenlife films Unfriended and Searching, Bekmambetov moved into the director’s chair for Profile, which makes chilling use of the format by showing just how close journalists’ personal and professional lives come to colliding online. Loosely based on French journalist Anna Érelle’s undercover investigation of ISIS recruiting, Profile revolves around London TV reporter Amy (Valene Kane) as she impersonates a convert to Islam and catfishes ISIS soldier Bilel (Shazad Latif) into reeling her over to Syria, like so many other young European women. The film rushes into this relationship at the expense of Amy’s credibility, as she throws on a hijab and cooks up a backstory mere minutes before her first Skype call with Bilel. Amy’s naïveté and lack of tech savvy make her hard to buy as a journalist, but she’s eerily effective as a representative of lost souls vulnerable to online predators and hate groups masquerading as families. (SW) 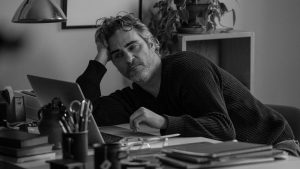 C’mon C’mon (2021). Joaquin Phoenix is no less magnetic playing a reasonably well-adjusted person in the most clear-headed journey into familial sociology yet from director Mike Mills (Beginners). Phoenix plays Johnny, a radio journalist traveling the United States to interview children. He’s querying them for their thoughts on the future in hopes of assuaging his own misgivings about the past and present, which come into stark relief when he must unexpectedly care for his nephew, Jesse (an effortlessly natural Woody Norman) for an extended period of time. C’mon C’mon focuses extensively on Johnny’s reportage, rendering it a persistently and persuasively alive ethnography of youthful exuberance; it suggests such feelings never truly disappear if someone’s there to help you recall them. Johnny’s project also offers a deep, unforgettable reminder of the chaos and conviction of feeling for each other that keeps us all going. Onward we press into our human collective of wonderful and terrible stories, whatever they bring, no silence too long or loud to someday bridge. C’mon … C’MON! (NR)